Rare anywhere, thundersnow is sometimes heard during the lake-effect snowstorms of the Great Lakes. The interaction of clouds and ice pellets inside these storms generates a charge, with lightning and thunder the result.

"Historic" snowstorms are the norm in Oswego, N.Y.; DOW and King Air will be there to catch them. 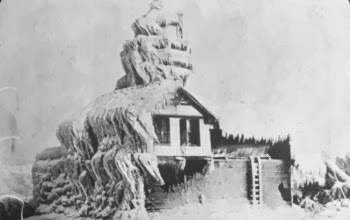 How to catch thundersnow in action? This winter, stalwart veterans of tornadoes, hurricanes and other severe storms will be watching.

One is known as the Doppler-on-Wheels (DOW), a National Science Foundation (NSF) national facility used by NSF-supported and other researchers. Joining it is a University of Wyoming instrumented aircraft, the King Air, also an NSF-funded national facility.

During the OWLeS project, scientists will dash through the snow in the Doppler-on-Wheels. 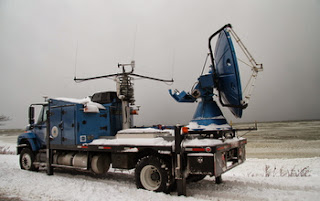 In rain, sleet or snow, like the postman, they always deliver...storm data.

They will work to better understand the atmospheric conditions and mechanisms that lead to the deep snows that accumulate across the region each winter.

The project is called OWLeS (Ontario Winter Lake-effect Systems). OWLeS is funded by NSF and is a collaborative effort of nine universities.

Although lake-effect snowstorms happen near all the Great Lakes, the New York area along Lake Ontario has some of the deepest snowfalls. Average annual snow reaches more than 100 inches. Nearby locations, such as the Tug Hill Plateau, may be blanketed with more than 250 inches each year.

A rotating cell in a snowband making landfall from Lake Ontario over Fair Haven, N.Y. 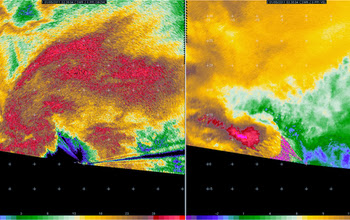 But lake-effect snows aren't limited to the shores of Lake Ontario.

"Even winter-hardened Great Lakes residents and infrastructure can be severely affected by heavy lake-effect snows," says Brad Smull, program director in NSF's Division of Atmospheric and Geospace Sciences, which funded the research.

"OWLeS' unique suite of modern mobile observing equipment and computer-based storm models will help us understand the processes that control the timing and location of these zones of heavy snow."

The DOW and the King Air will intercept the lake-effect snowbands that cause the heavy snowfalls of the Lake Ontario region.

The King Air will fly over Lake Ontario, collecting data on snow and ice pellets, temperatures and other properties inside lake-effect snowbands. 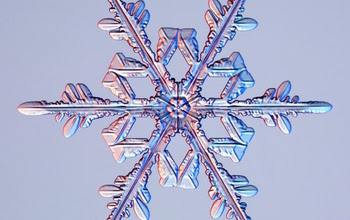 The DOW looks more like the dish of a radio telescope than a sophisticated weather instrument. It's mounted on the back of a flat-bed truck. DOW-on-board, the truck becomes an odd configuration of generator, equipment and operator cabin.

Ungainly as it may appear, it's ideally suited to providing detailed information on the inner workings of snowstorms, says Josh Wurman, CSWR director.

The DOW uses Doppler radar to produce velocity data about objects--such as severe storms--at a distance.

Lakes upwind of Lake Ontario can have a big influence on how heavily, and where, lake-effect snows fall.

"Air that has been moistened and mixed by moving over Lake Huron, Lake Michigan and even Lake Superior can play a major role in the large amount of snow that falls in the Lake Ontario snowbelt," says Kristovich.

Some of the questions scientists will investigate during OWLeS include:

What environmental factors have the greatest influence on the amount of snowfall and location of snowbands over and near Lake Ontario?

How do other Great Lakes affect the amount of snow that falls near Lake Ontario?

How does the interplay between winds and clouds produce long-lived snowbands far downstream of open water?

How does the local terrain influence the strength and longevity of these systems?

As snows begin to fall, the researchers will head out to collect data. The results will lead to increased predictability of, and preparedness for, Old Man Winter.