Digging out a seismographic instrument in Antarctica. 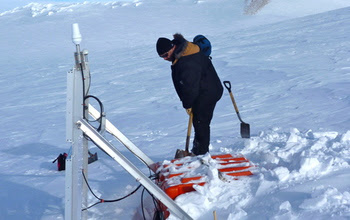 Previous studies using aerial radar and magnetic data detected the presence of subglacial volcanoes in West Antarctica, but without visible eruptions or seismic instruments recording data, the activity status of those systems ranged from extinct to unknown. However, as Amanda Lough, a doctoral candidate at Washington University in St. Louis, points out, "Just because we can't see ...below the ice, doesn't mean there's not something going on there."

"This [study] is saying that we have seismicity, which means [this system] is active right now," according to Lough. "This is saying that the magmatic chamber is still alive; that there is magma that is moving around in the crust."

Lough published her discovery in this week's issue of NatureGeoscience along with her advisor Douglas Wiens, a professor of earth and planetary sciences at Washington University in St. Louis, and a team of co-authors.

NSF has a presidential mandate to manage the U.S. Antarctic Program, through which it coordinates all U.S. science on the Southernmost continent and in the Southern Ocean and the logistical support which makes the science possible. 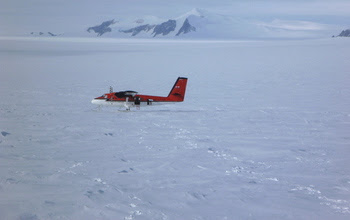 The characteristics of the seismic events, including the 25- to 40-kilometer (15- to 25-mile) depth at which they occurred, the low frequency of the seismic waves, and the swarm-like behavior rule out glacial and tectonic sources, but are typical of deep long-period earthquakes. Deep long-period earthquakes indicate active magma moving within the Earth's crust and are most often associated with volcanic activity.

The two swarms of seismic activity were detected by instruments deployed to obtain data on the behavior of the WAIS as part of the NSF-funded POLENET project, a global network of GPS and seismic stations. Wiens is a POLENET principal investigator.

Lough plotted the location of the swarms and realized their proximity to the Executive Committee Range, a cluster of volcanoes that were believed to be dormant, in Marie Byrd Land. She consulted with a volcanic seismologist to confirm that the frequency content and the waveforms of the seismic signals were indicative of a volcanic system.

The location of the current seismicity, about 55-60 kilometers (34-37 miles) south of Mt. Sidley, is where current volcanic activity would be predicted to occur based on the geographic locations and the ages of the lava of the known volcanoes in the Executive Committee Range. The seismic swarms were also located near a subglacial high-point of elevation and magnetic anomalies which are both indicative of a volcano.

In some volcanic systems, deep long period earthquakes can indicate an imminent eruption, but Lough sent samples of her data to volcano seismologists who "didn't see seismic events that would occur during an eruption." However, the elevation in bed topography did indicate to Lough and her colleagues that this newly discovered volcano had erupted in the past.

Radar data showed an ash layer trapped within the ice directly above the area of seismic and magmatic activity. Lough initially thought that the ash layer might have evidence of a past eruption from the volcano detected in this study, but based on the distribution of the materials and the prevailing winds, the ash most likely came from an eruption of nearby Mt. Waesche about 8000 years ago. The dating of the ash layer did confirm that Mt. Waesche, believed to have last been active around 100,000 years ago, erupted much more recently than previously thought.

Only an extremely powerful eruption from the active magmatic complex discovered in this study would break through the 1- to 1.5-kilometer (0.6-0.9 miles) thick ice sheet overlying the area, but this research extends the range of active volcanism deeper into the interior of the WAIS than previously known. Should an eruption occur at this location, the short-term increase in heat could cause additional melting of the bottom of the ice sheet, thereby increasing the bed lubrication and hastening ice loss from WAIS.