Patients affected by a bacterial infection can usually be treated with an antibiotic. But sometimes a resistant bacterial strain is causing the infection. In a hospital setting, doctors ideally want to know if they are dealing with such bacteria and which drugs they should choose. But if the doctor runs a test it can take days to get a result. Now, a European project is paving the way for much more rapid tests using DNA biochips. The aim is to rapidly screen disease-causing bacteria using a microarray to spot which resistant genes are present in bacteria. 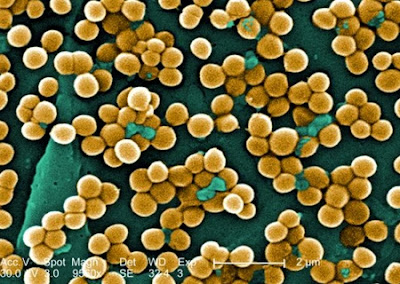 It is important to search for many resistance genes because bacteria have a habit of exchanging bits of DNA that make for useful anti-drug defences, making the bacteria resistant or even untreatable. This is bad news for patients infected with a superbug. “A lot of these resistance genes are on mobile elements. They can transfer all sorts of different resistant genes if they are put under the right pressures,” explains project scientist Peter Mullany, who is also a molecular microbiologist at University College London, UK. He adds: “There are lots of resistance genes too, with at least 30 for tetracycline [an antibiotic] alone.”

The team also discovered a new genetic fragment that gives bacteria an ability to resist an antibiotic called minocycline and an antiseptic for wounds called cetrimide bromide. Identifying the fragment’s presence could allow doctors to take steps preventing its spread to harmful bacteria.

Until now, the DNA biochips were used to investigate how various antibiotics influenced the kinds of resistant bacteria that were present. It also helped determine which persisted at various sites in the human body – mouth, skin and nose. This gave insight into how antibiotics affect ‘friendly’ microorganisms naturally present in our bodies. “There are a lot of unknowns in this area, as the majority of microorganisms can’t be cultured,” says Mullany. “But if you can get rapid knowledge about which antibiotics genes are present, you have a better chance that treatment will be successful.”

Experts welcome this development. Microarray allows the simultaneous detection of a large number of genes in the bacterial cell in one test. “The result which is obtained is a complex pattern of spots or dots, representing the individual resistance genes, which is read by machine and tells us which genes are present,” explains Chris Teale, head of antimicrobial resistance at the Animal Health and Veterinary Laboratories Agency in the UK, “This technique is a great benefit when screening isolates for resistance because so many different genes can be screened at the same time.”

The threat of antibiotic resistant pathogens is global, notes Richard Goering professor of medical microbiology and immunology at Creighton University, Omaha, Nebraska, USA, whose research deals with antibiotic resistance genes in Methicillin-resistant Staphylococcus aureus (MRSA). “The issue in dealing with these is two-fold, diagnosis and treatment. There are long standing worldwide problems with slowdown in pharma research and development for new drugs but still the bottom line is that the sooner the diagnosis is made the better the potential therapeutic outcome,” Goering explains.

Quick detection is therefore a positive step. “So, genomics and the ability to rapidly sequence bacterial chromosomes holds great promise in identifying bacterial genes associated with accurate detection of both the bug and what is it susceptible to treatment,” Goering tells youris.com.

However, more work lies ahead. “More such tests are needed especially for use in resource-poor regions where morbidity and mortality associated with infectious disease are always high,” he adds, concluding that just because a gene is present, does not mean it is actively expressed, and therefore that molecular techniques will need to address this issue too.