A new study reveals how pollution causes thunderstorms to leave behind larger, deeper, longer lasting clouds. Appearing in the Proceedings of the National Academy of Sciences November 26, the results solve a long-standing debate and reveal how pollution plays into climate warming. The work can also provide a gauge for the accuracy of weather and climate models.

Researchers had thought that pollution causes larger and longer-lasting storm clouds by making thunderheads draftier through a process known as convection. But atmospheric scientist Jiwen Fan and her colleagues show that pollution instead makes clouds linger by decreasing the size and increasing the lifespan of cloud and ice particles. The difference affects how scientists represent clouds in climate models.

"This study reconciles what we see in real life to what computer models show us," said Fan of the Department of Energy's Pacific Northwest National Laboratory. "Observations consistently show taller and bigger anvil-shaped clouds in storm systems with pollution, but the models don't always show stronger convection. Now we know why."

Also, pollution can decrease the daily temperature range via such clouds: High clouds left after a thunderstorm spread out across the sky and look like anvils. These clouds cool the earth during the day with their shadows but trap heat like a blanket at night. Pollution can cause clouds from late afternoon thunderstorms to last long into the night rather than dissipate, causing warmer nights.

Because of the poor reconstructions, researchers have been faced with a dilemma: Pollution causes the anvil-shaped clouds to linger longer than they would in clean skies — but why?

Possible reasons revolve around tiny natural and manmade particles called aerosols that serve as seeds for cloud droplets to form around. A polluted sky has many more aerosols than a clean sky — think haze and smog — and that means less water for each seed. Pollution makes more cloud droplets, but each droplet is smaller.

More and smaller droplets change things for the clouds. Researchers have long thought that smaller droplets start a chain reaction that leads to bigger, longer-lasting clouds: Instead of raining down, the lighter droplets carry their water higher, where they freeze. The freezing squeezes out the heat the droplets carry with them and causes the thunder cloud to become draftier. The stronger convection lifts more water droplets, building up the cloud.

But researchers don't always see stronger convection every time they see larger and longer-lasting clouds in polluted environments, indicating a piece of the puzzle was missing.

To solve this dilemma, Fan and colleagues decided to compare real-life summer storm clouds to a computer model that zooms deep into simulated clouds. The model included physical properties of the cloud particles as well as the ability to see convection, if it gets stronger or weaker. Most models run in days or weeks, but the simulations in this study took up to six months.

"Modeling the details of cloud microphysical properties is very computationally intensive, so models don't usually include them," said Fan.

The researchers started with cloud data from three locations that differ in how polluted, humid and windy they typically are: the tropics in the western Pacific, southeastern China and the Great Plains in Oklahoma. The data had been collected through DOE's ARM Climate Research Facility.

With support from DOE's Regional and Global Climate Model program, the research ran simulations on PNNL's hometown supercomputer Olympus. Their simulations of a month of storms ended up looking very similar to the actual observed clouds, validating that the models re-created the storm clouds well.

The team found that in all cases, pollution increased the size, thickness and duration of the anvil-shaped clouds. However, only two locations — the tropics and China — showed stronger convection. The opposite happened in Oklahoma — pollution made for weaker convection.

In addition, the team found that in clean skies, the heavier ice particles fall faster out of the anvil-shaped clouds, causing the clouds to dissipate. However, the ice crystals in polluted skies were smaller and too light to fall out of the clouds, leading to the larger, longer-lasting clouds.

Lastly, the team estimated how much warming or cooling the storm clouds contributed. Overall, the polluted clouds cooled the day and warmed the night, decreasing the daily temperature range. 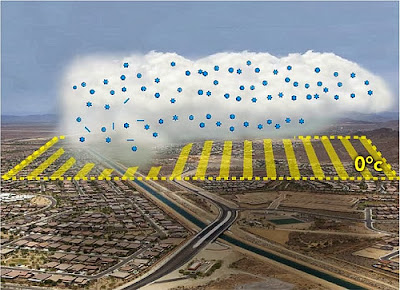 Most models don't simulate convection well, take into account the microphysical processes of storm clouds, nor address how pollution interacts with those processes. Accounting for pollution effects on storm clouds in this way could affect the ultimate amount of warming predicted for the earth in the next few decades. Accurately representing clouds in climate models is key to improving the accuracy of predicted changes to the climate.

This work was supported by the DOE's Office of Science.