Old And Mysterious Star Clusters: What We Have Learned

The NASA/ESA Hubble Space Telescope has captured the best ever image of the globular cluster Messier 15, a gathering of very old stars that orbits the centre of the Milky Way. This glittering cluster contains over 100 000 stars, and could also hide a rare type of black hole at its centre.

This cluster of stars is known as Messier 15, and is located some 35 000 light-years away in the constellation of Pegasus (The Winged Horse). It is one of the oldest globular clusters known, with an age of around 12 billion years. 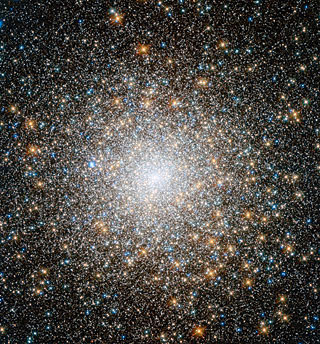 This multi-coloured firework display is a cluster of stars known as Messier 15, located some 35 000 light-years away in the constellation of Pegasus (The Winged Horse). It is one of the oldest globular clusters [1] known, with an age of around 12 billion years.

Very hot blue stars and cooler golden stars are seen swarming together in this image, becoming more concentrated towards the cluster's bright centre. Messier 15 is one of the densest globular clusters known, with most of its mass concentrated at its core.

The NASA/ESA Hubble Space Telescope has observed many star clusters. As well as being scientifically interesting, these clusters produce stunning images, appearing like sparkling baubles in the sky.  This episode of the Hubblecast looks at how Hubble has studied and imaged these beautiful objects, also introducing a striking new image of Messier 15, one of the oldest globular clusters in our skies. This is the best ever image of this cluster, which contains over 100 000 stars, a planetary nebula known as Pease 1 (otherwise named PN Ku 648 or Kürster 648), and something more exotic: at its core, it is thought to host a rare type of black hole.
Credit: ESA/Hubble

However, this sparkling bauble has hidden secrets. Astronomers studying the cluster with Hubble in 2002 found there to be something dark and mysterious lurking at its heart. It could either be a collection of dark neutron stars [2], or an intermediate-mass black hole. Of the two possibilities it is more likely that Messier 15 harbours a black hole at its centre, as does the massive globular cluster Mayall II.

This image, from the Digitized Sky Survey 2, shows the sky around Messier 15, one of the oldest and densest globular clusters known. Intermediate-mass black holes are thought to form either from the merging of several smaller, stellar-mass black holes, or as a result of a collision between massive stars in dense clusters. A third possibility is that they were formed during the Big Bang. In terms of mass they lie between the more commonly found stellar-mass and supermassive types of black hole [3], and could tell us about how black holes grow and evolve within clusters like Messier 15, and within galaxies.

As well as this black hole, Messier 15 is known to house a planetary nebula, Pease 1 [4] — and it was the first globular known to contain one of these objects [5]. This nebula is visible as the bright blue object just to the left of the cluster's centre.

This new image is made up of observations from Hubble's Wide Field Camera 3and Advanced Camera for Surveys in the ultraviolet, infrared and optical parts of the spectrum.
Notes

[1] A globular cluster is a roughly spherical group of stars that orbits the core of a galaxy. The Milky Way has over 150 of these starry satellites — including Messier 15. However, other galaxies have many more than this; a staggering 160 000 were recently discovered by Hubble in the galaxy cluster Abell 1689 (heic1317). Globular clusters contain some of the most ancient stars in the Universe.

[2] A neutron star is formed from the collapse of a massive star. They are very hot and very dense, with an average mass of around two solar masses contained within a radius of tens of kilometres.