The Sistine Chapel in Rome is recognized as the most important chapel in the world, and accommodates perhaps the most extraordinary frescoes ever created by human hands. Five and a half million visitors crowd into the chapel each year to see Michelangelo's works, but they witness only a few in full glory because a lighting level approximating twilight is usually experienced. A new type of lighting from Osram will change this from next year: illuminance levels will increase, energy consumption will be cut and the art will be carefully conserved. 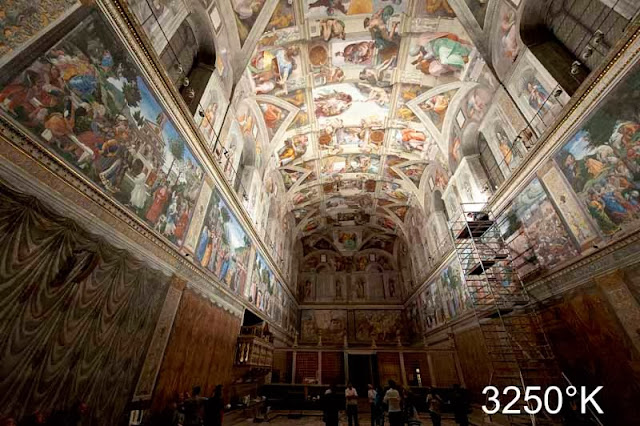 Experts use the term 'mesopic' for the low-contrast twilight usually found in the chapel that impairs color per-ception and contrast. This quality of light is due to former technical limitations, the currently installed lighting technology originating from the 1980’s. Eight 150 watt HQI spotlights and two 1,000 watt halogen projectors are currently installed on the outside of each of the 12 chapel windows. Their high connected load though is only sufficient for illuminance values of a few lux on the artworks, because semi-transparent plastic covers have been installed in front of the windows to protect the art from ultraviolet radiation. These are intended to block damaging radiation but also absorb plenty of light.

From 18 February 2014, the 450th anniversary of the death of Michelangelo, LED light will be illuminating the artist's masterpiece "The Creation of Adam" as well as other works accommodated by the chapel, and art lovers visiting the interior of the Sistine Chapel will then be able to experience the art in a completely new diversity of color. Lighting experts from the company of Osram developed a sophisticated LED lighting concept that increases illuminance by five to ten times, elevating the colors from the semi-darkness of twilight and illuminat-ing the complete color spectrum of the frescoes in highly homogeneous and optimally controlled light. The development was implemented within the framework of a project subsidized by the European Union with a consortium of various development partners including lighting planners, conservationists and energy and light measurement technicians.

Based on the lighting solution in the Lenbachhas

The technical basis of the project is an LED luminaire similar to ones recently used in the reopened Lenbachhaus art museum in Munich, Germany. For that project Osram engineers developed a luminaire from scratch featuring red, green, blue as well as warm white and cool white LED light. The five color channels of the luminaire can be independently controlled to allow fine adjustment of the color temperature between 3,000 and 6,000 Kelvin in accordance with changing works of art in the exhibition spaces. In the Sistine Chapel on the other hand, the frescoes will be embellishing the walls and ceilings for a long time to come; a range between 3,000 and 4,000 Kelvin was thus sufficient.

Simultaneously, control options inherent with LED technology are exploited to the full, and the aim was to achieve an impression of color that more closely justifies the high component of saturated colors in the frescoes. The first stage in the project was the non-contact analysis of fresco pigmentation at 280 points on the Renaissance paintings by colorimetry experts from the Pannonian University in Hungary, the analysis points being illuminated with a calibrated light source and the reflected spectrum measured. This actual color response (and not the classic color rendering index) then serves as a benchmark for the fine spectral adjustment of the LED luminaires. Today, experts assume that Michelangelo did not mix his colors under candlelight or the light of torches but with daylight and thus with a cooler color temperature.

A test installation was giving an impression of the new lighting system at a color temperature of 3550 Kelvin. 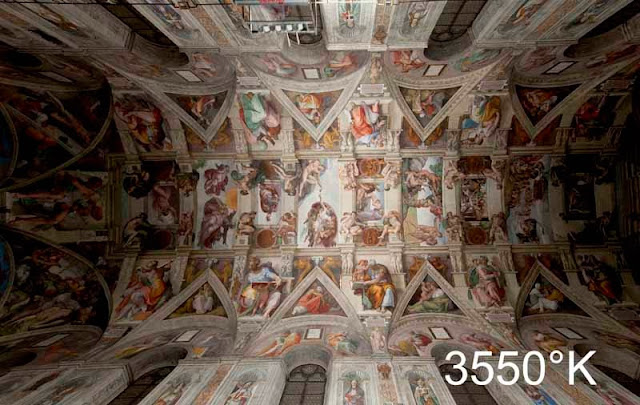 The chapel though is illuminated with LED light at 3,000 Kelvin, and so a sophisticated correction algorithm was developed that integrates the differing color perception of the human eye with various color temperatures into the spectral distribution of the LED light. It is highly probable that visitors from 18 February 2014 onwards will be able to experience the interplay of fresco colors just as Michelangelo once intended, and such ambitious fine-tuning is currently only possible with light emitting diodes.

In addition, ultraviolet and infrared radiation components are almost completely absent from the LED spectrum, which is why in the future the LED luminaires can be installed at a height of around ten meters, concealed on a narrow ledge in the interior of the chapel, and no longer have to be banished to the outside. 40 luminaires, 20 on each side, are mounted at this location in groups of four, and the luminaires accommodate a total of 140 red, green, blue and white high-performance light emitting diodes. A sophisticated configuration of the reflectors guarantees homogeneous and glare-free illumination that reaches precisely up to the upper edge of the artificial curtains that adorn the lower third of the chapel interior. The original design of the luminaires was made more slender to enable them to fit onto the narrow cornice, each of the luminaires being approximately 80 cm wide and with the heat sink only around 100 mm in depth.

Each luminaire is also mounted at three points due to the unevenness of the cornice and is positioned with high precision. LED spots will also be installed and are intended to replace the obsolete gala lighting used with fairs, concerts and of course the conclave. 30 LED spots each with 50 watts are mounted in groups of three between the windows, and when needed these can be manoeuvred from their hideout on the ledge with power-assisted motion. If not needed, they remain concealed. Despite significantly higher illuminance values and maximum light quality, the LED installation achieves top values in terms of electricity overheads, electrical power consumption of the chapel including gala and visitor lighting being reduced from over 66 kilowatts down to 7.5 kilowatts.

Supported by the European Union

The lighting of the Sistine Chapel is a pilot project with the working title of LED4Art, supported by the European Funding Program for Information and Communication Technology within the Framework Program for Competi-tiveness and Innovation (PSP-CIP). The aim of the subsidy program is to demonstrate new possibilities for LED technology with regard to energy efficiency and improved quality of light, and thus to achieve more rapid mar-ket penetration for the new technology. In addition to the project coordinator Osram, other partners involved are the Pannonian University in Hungary, the Institut de Recerca en Energia de Catalunya in Spain and the planning offices of Faber Technica in Italy.