NASA Rocket To Peek At Atmosphere Of Venus

The Venus Spectral Rocket Experiment (VeSpR, PI John Clarke, Boston U.) launched successfully  from White Sand Missile Range. VeSpR will study the present day escape of water from the atmosphere of Venus and relate it to the past abundance of water on Venus by measuring hydrogen (H) and the heavier, slower to escape, deuterated hydrogen (D) above 90 km on Venus.

The use of a pre-dispersing prism to prevent long wavelengths from entering the spectrograph permits a long-aperture approach to echelle spectroscopy, and the chosen combination of imaging and dispersion scales provides high spectral resolution of emission line profiles with a several arc sec wide aperture for good sensitivity.

For comparable spectral resolution the HST/STIS uses a 0.2 arc sec aperture, which provides 375 times less solid angle on the sky than a 3 x 5 arc sec region observed by the sounding rocket telescope. Good data was obtained by both detectors with no obvious significant anomalies. Preliminary reports indicate a successful mission.

A week after launching a new orbiter to investigate the upper atmosphere of Mars, NASA is sending a sounding rocket to probe the atmosphere of Venus.

The Mars Atmosphere and Volatile Evolution, or MAVEN, mission launched from Cape Canaveral Air Force Station in Florida on Nov. 18. Now, the Venus Spectral Rocket, VeSpR for short, is scheduled to lift off from White Sands, N.M., on Nov. 25.

"It is appropriate that these launch dates are close together, because both missions will study atmospheric loss," said Kelly Fast, the program scientist for MAVEN and the program officer for Planetary Astronomy at NASA Headquarters in Washington. "VeSpR will peek at Venus from above Earth's absorbing atmosphere, and MAVEN will journey to Mars to do a long-term study."

NASA launched a sounding rocket to study ultraviolet light being emitted from the atmosphere of Venus, shown here in false color to highlight subtle contrasts in cloud markings. 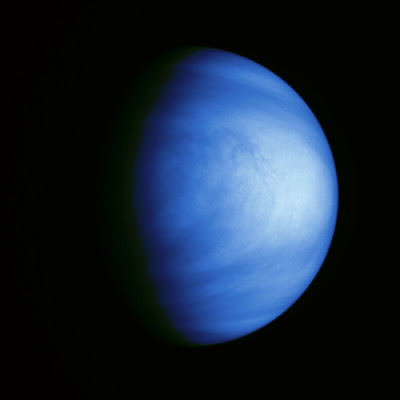 VeSpR is a two-stage system, combining a Terrier missile – originally built as a surface-to-air missile and later repurposed to support science missions – and a Black Brant model Mk1 sounding rocket with a telescope inside. Integration took place at NASA’s Wallops Flight Facility in Virginia.

The experiments will look at ultraviolet (UV) light that is being emitted from Venus' atmosphere, which can provide information about the history of the planet's water. Measurements like these cannot be done using Earth-based telescopes because our atmosphere absorbs most UV light before it reaches the ground.

The solution is to make UV measurements from beyond Earth's atmosphere. In this case, the sounding rocket will carry the telescope more than 65 miles (110 kilometers) above the surface of Earth; at that altitude, the atmosphere thins out enough to permit UV readings.

"Venus today has a thick atmosphere that contains very little water, but we think the planet started out with an ocean's worth of water," said John T. Clarke of Boston University, the mission's principal investigator.

Scientists are still trying to determine whether water existed on the surface of Venus or only high up the atmosphere, where temperatures were cooler. If the surface temperature stayed below the boiling point of water long enough, rivers might have once flowed on the planet. Venus may have even had ice.

The key to figuring out how much water Venus once had lies in how much hydrogen and deuterium, a heavier version of hydrogen, remain in the atmosphere. Both can combine with oxygen to make water, either in the familiar H2O form or the rarer hydrogen, deuterium and oxygen form, called HDO. (Very small amounts of D2O also form.)

Intense UV light from the sun has broken apart nearly all of the water molecules in Venus' atmosphere. Because the regular hydrogen atoms in the water are lighter, they escape into space more quickly than the heavier deuterium ones. By comparing the amount of deuterium now in the atmosphereto the amount of hydrogen, researchers can estimate how much water disappeared from Venus and how quickly it happened.

Earlier estimates, made from data collected by NASA's 1978 Pioneer Venus spacecraft and other observations, indicated Venus could have had enough ancient water to cover the whole globe with 23 feet (7 meters) of liquid. But it turns out that the amounts of hydrogen and deuterium can vary at different heights in Venus' atmosphere, which could change the calculations. To help resolve the uncertainty, VeSpR will make measurements specifically in the upper atmosphere.

The VeSpR instrument will observe Venus for 8 minutes, with data being transmitted in real time, before the payload returns on a parachute safely to Earth. Later, the payload will be retrieved so that the instrument can be used for future experiments.

Clarke and his team will combine these measurements with observations of Venus they made recently with NASA's Hubble Space Telescope. The group is also collaborating with Jean-Loup Bertaux of France's Centre National de la Recherche Scientifique to study the planet using the UV instrument on the European Space Agency's Venus Express spacecraft.

VeSpR was built with funding from NASA's Planetary Astronomy program. The NASA sounding rocket program is managed for the agency at NASA’s Wallops Flight Facility. MAVEN's principal investigator is based at the University of Colorado Laboratory for Atmospheric and Space Physics in Boulder. NASA's Goddard Space Flight Center in Greenbelt, Md., manages MAVEN. Lockheed Martin built the MAVEN spacecraft and is responsible for mission operations.