Somewhere on Earth, there's always a lightning flash. The globe experiences lightning some 50 times a second, yet the details of what initiates this common occurrence and what effects it has on the atmosphere – lightning may be linked to incredibly powerful and energetic bursts called terrestrial gamma ray flashes, or TGFs -- remains a mystery. In mid-November, a football-sized mission called Firefly, which is funded by the National Science Foundation, will launch into space to study lightning and these gamma ray flashes from above.

The Firefly mission will launch in November 2013 to study lightning and its relationship to a phenomena called terrestrial gamma ray flashes, or TGFs.

The Firefly instrument is what's known as a cubesat, a very small satellite that offers the chance for quality space science with a relatively inexpensive price tag.

"We can do great science with these small missions," said Doug Rowland, the principal investigator for Firefly at NASA's Goddard Space Flight Center in Greenbelt, Md. "Firefly will gather up to a year of observations on the mysterious workings of lightning. Lightning is so familiar we tend to take it for granted, but we really don’t know the details of how it works — even though it is a critical part of the global electric circuit, and has obvious social and technological effects."

Lightning is ubiquitous and intimately connected to life on Earth, but we don't often think about what's happening higher up in the atmosphere. The radiation generated by lightning is so intense that it can generate antimatter and gamma rays within TGFs just a few miles of the ground. NASA's Compton Gamma Ray Observatory first discovered TGFs in the 1990s. Designed to look outward at cosmic sources of gamma rays, the mission also caught rare but tantalizing glimpses of gamma rays coming from Earth.

"Gamma rays are thought to be emitted by electrons traveling at or near the speed of light when they're slowed down by interactions with atoms in the upper atmosphere," said Therese Moretto Jorgensen, program director in NSF's Division of Atmospheric and Geospace Sciences, which funds Firefly. "TGFs are among our atmosphere's most interesting phenomena."

The electrons needed to create gamma rays have to be moving so fast and carrying so much energy, that scientists were at a loss to explain what process near Earth could kick them up to such high speeds. Indeed, prior to the discovery of TGFs, scientists thought electrons moving this fast could only be generated near much larger bodies such as stars, galaxies or black holes.

Lightning by itself is thought to be only a tenth as strong as would be needed to accelerate the electron beams to such incredible speeds, but scientists have hypothesized that perhaps some lightning is triggered by an electron avalanche, a runaway chain reaction that pushes electrons up to these incredible speeds. Understanding the mechanism for what accelerates the electron beams near Earth will help scientists understand how the same process happens throughout the rest of the universe.

An artist's rendition of the football-sized Firefly satellite in low-Earth orbit. Firefly's mission is to study the relationship between lightning and huge bursts of gamma rays called terrestrial gamma ray flashes. 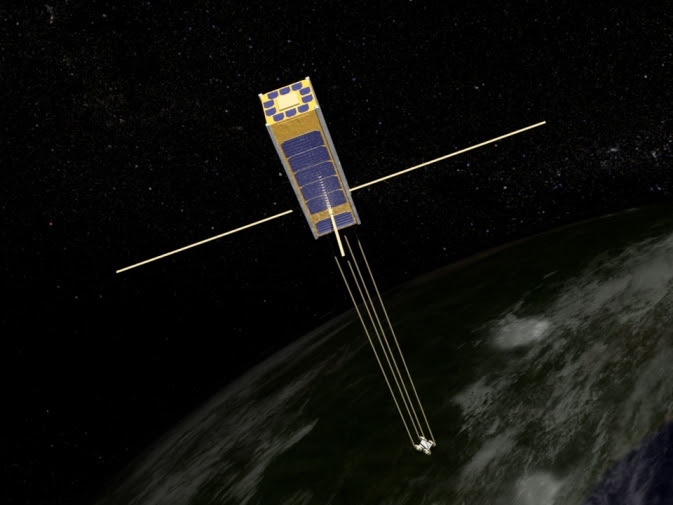 "The idea that some of the lightning overhead may be triggered by the same processes that happen in supernovas and cosmic particle accelerators is mind-blowing," said Rowland. "I’ve never looked at thunderstorms the same way since learning about these ideas.”

The NSF CubeSat program represents a low cost access to space approach to performing high-quality, highly targeted science on a smaller budget than is typical of more comprehensive satellite projects, which have price tags starting at $100 million. The CubeSat Firefly, by focusing its science goals, will carry out its mission in a much smaller package and at a considerably lower cost.


The Firefly mission also emphasizes student involvement as part of the ongoing effort to train the next generation of scientists and engineers. Students at Siena College, in Loudonville, N.Y., and the University of Maryland Eastern Shore, in Princess Anne, Md., were involved in all phases of the Firefly mission. 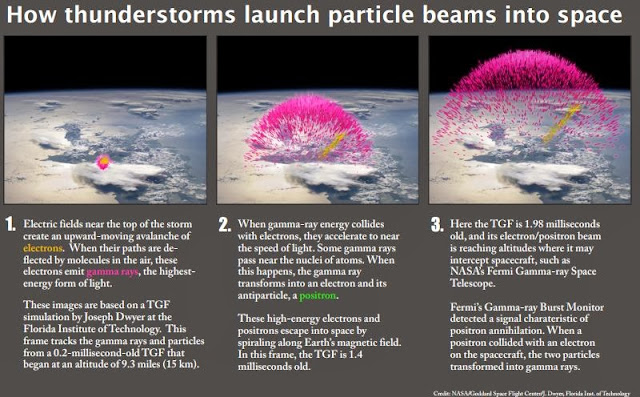 The window for Firefly launch opens on Nov. 19, 2013, and it is scheduled to launch with 27 other cubesat missions, as well as a NASA experiment called the Total solar irradiance Calibration Transfer Experiment, or TCTE, which will continue measurements from space of the total energy output of the sun.

Fermi’s Gamma-ray Burst Monitor detected 130 TGFs from August 2008 to the end of 2010. Thanks to instrument tweaks, the team has been able to improve the detection rate to several TGFs per week. (No audio.)
Credit: NASA