Magnets have fascinated mankind for millenia. From the Greek philosophers to scientists of the modern era, which saw the rise of quantum mechanics, magnets have been pondered and investigated. Nowadays, they are not only intriguing oddities of nature, but also constitute crucial building blocks of modern technology: Ranging from data storage over medical instrumentation to transportation. And yet, to this day, they continue to puzzle scientists.

A novel experiment at the University of Hamburg utilizes matter waves to understand magnets. Magnets are built of elementary magnets which can point North (red) and South (blue), as can be seen in this computer simulation. 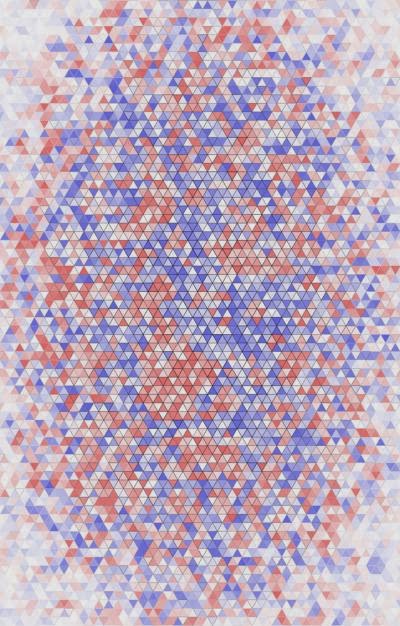 A novel approach to understand magnets was taken by a team of scientists lead by Klaus Sengstock and Ludwig Mathey from the Institute of Laser Physics at the University of Hamburg, with collaborators from Dresden, Innsbruck and Barcelona. In a joint experimental and theoretical effort, which was featured as the cover story of Nature Physics in November 2013, quantum matter waves made of Rubidium atoms were controlled in such a way that they mimic magnets. Under these well-defined conditions, these artificially created magnets can be studied with clarity, and can give a fresh perspective on long-standing riddles.

Quantum matter waves themselves are an intriguing state of atomic Rubidium clouds, based on a quantum mechanical effect predicted by Einstein and Bose as early as 1924 and observed for the first time in a ground-breaking experiment in 1995, which was later awarded with the Nobel prize.

Building on that experiment and developing it further, the team of scientists used infrared laser beams to force the atoms into a motion along triangular pathways, creating quantum matter waves that act as if they were magnets, like the ones you stick on your fridge. Speaking of cold, these atoms are about a trillion times colder than outer space.

"The experimental challenges are extraordinary", says lead experimental author Julian Struck. "For the atoms to move along the right trajectories, it is absolutely crucial that the laser beams are precisely stabilized. Otherwise, the motion of the atoms would be completely chaotic."

When a matter wave moves clockwise around a given triangle, as depicted in the illustration, the neighboring triangles are surrounded by counterclockwise motion. The resulting orientation at each triangle corresponds to a magnet pointing in North or South direction. These elementary magnets form domains and are in competition with each other, depicted in red and blue.

Lead theoretical author Robert Höppner explains: "We had to use a supercomputing facility such as the one at Juelich for our computer simulations of the experiment. Otherwise the complexity of the problem cannot be tackled. This allowed us to visualize the triangular magnets created by the condensate of atoms, and we learned about the subtle domain structure and how they respond in a magnetic field."

The results of this study have been published in the November issue of Nature Physics, where an illustration of the magnetic phases from the computer simulation is featured on the cover.


Contacts and sources:
Robert Höppner
University of Hamburg
on November 27, 2013