Has Comet ISON Broken Up?

As Comet ISON heads toward its closest approach to the sun — known as perihelion — on Nov. 28, 2013, scientists have been watching through many observatories to see if the comet has already broken up under the intense heat and gravitational forces of the sun.

Comet ISON moves ever closer to the sun in this movie from the ESA/NASA Solar and Heliospheric Observatory, captured in the early hours of Nov. 27, 2013. A coronal mass ejection explodes off the sun – it is unlikely to damage ISON even if they cross paths.

The comet is too far away to discern how many pieces it is in, so instead researchers carefully measure how bright it is, which can be used to infer its current state. Less light can sometimes mean that more of the material has boiled off and disappeared, perhaps pointing to a disintegrated comet. But also a disintegrating comet sometimes gives off more light, at least temporarily, so researchers look at the comet's pattern of behavior over the previous few days to work out what it may be doing.

Has Comet ISON broken up? It is still unclear.

At times observations have suggested ISON was getting dimmer and might already be in pieces. However, over Nov. 26-27, 2013, the comet once again brightened. In the early hours of Nov. 27, the comet appeared in the view of the European Space Agency/NASA mission the Solar and Heliospheric Observatory in the Large Angle and Spectrometric Coronagraph instrument.

NASA's STEREO-A spacecraft continues to observe Comet ISON as it approaches the sun. This movie from the spacecraft's Heliospheric Imager shows Comet ISON, Mercury, Comet Encke and Earth over a five day period from Nov. 20 to Nov. 25, 2013. The sun sits right of the field of view of this camera. This version is enhanced, resized and cropped for HD.

Coronagraphs block out the bright light of the sun in order to better see the dimmer solar atmosphere, the corona. In these images, the comet looks quite bright as it moves in from the lower right of the image. A giant cloud of solar material, called a coronal mass ejection or CME, is also seen in the images bursting off the bottom of the sun and heading out into space. It is as yet unclear if the CME is heading towards ISON but even if it does, it poses no real danger to the comet.

If the comet has already broken up, it should disintegrate completely as it makes its slingshot around the sun. This would provide a great opportunity for scientists to see the insides of the comet, and better understand its composition — as such information holds clues about what material was present during the solar system's formation when this comet was born. However, it would likely mean no comet visible in the night sky in December. We'll only know for sure after the comet rounds the sun on Thanksgiving Day.

In the early hours of Nov. 27, 2013, Comet ISON entered the field of view of the European Space Agency/NASA Solar and Heliospheric Observatory. In this picture, called a coronagraph, the bright light of the sun itself is blocked so the structures around it are visible. The comet is seen in the lower right; a giant cloud of solar material, called a coronal mass ejection or CME, is seen billowing out under the sun.

Comet ISON streams toward the sun from the lower right in this image from the ESA/NASA Solar and Heliospheric Observatory mission, captured at 3:07 a.m. EST on Nov. 27, 2013. A cloud of solar material, called a coronal mass ejection, is seen under the sun. 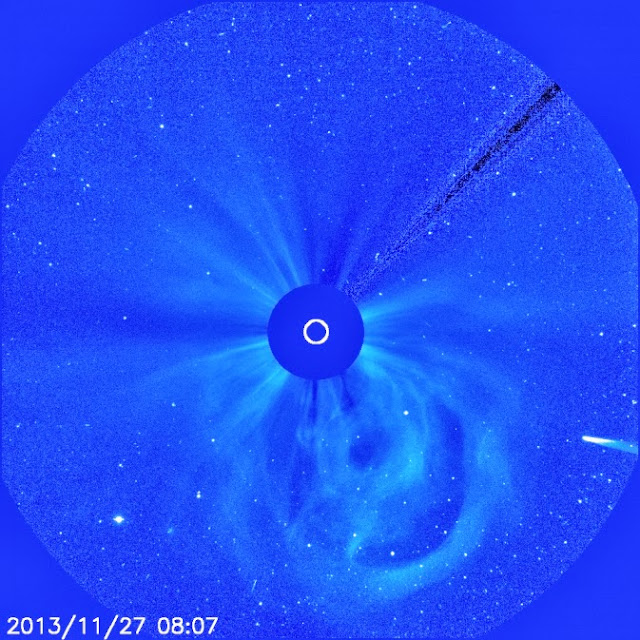 Comet ISON makes its appearance into the higher-resolution HI-1 camera on the STEREO-A spacecraft. The dark "clouds" coming from the right are density enhancements in the solar wind, causing all the ripples in comet Encke's tail. These kinds of solar wind interactions give us valuable information about solar wind conditions near the sun. Note: the STEREO-A spacecraft is currently located on the other side of the Sun, so it sees a totally different geometry to what we see from Earth.