A team of Massachusetts General Hospital (MGH) investigators working to create "protocells" – primitive synthetic cells consisting of a nucleic acid strand encased within a membrane-bound compartment – have accomplished an important step towards their goal. In the November 28 issue of Science, the investigators describe a solution to what could have been a critical problem – the potential incompatibility between a chemical requirement of RNA copying and the stability of the protocell membrane.

"For the first time, we've been able to do nonenzymatic RNA copying inside fatty acid vesicles," says Jack Szostak, PhD, of the MGH Department of Molecular Biology and the Center for Computational and Integrative Biology. "We've found a solution to a longstanding problem in the origin of cellular life: RNA copying chemistry requires the presence of the magnesium ion Mg2+, but high Mg2+ levels can break down the simple, fatty acid membranes that probably surrounded the first living cells."

RNA replication in model protocell:  Left to right, upper sequence: As protocells replicate their nucleic acid and grow, the vesicles extend into thread-like structures, eventually breaking off to form new vesicles containing their own nucleic acid. 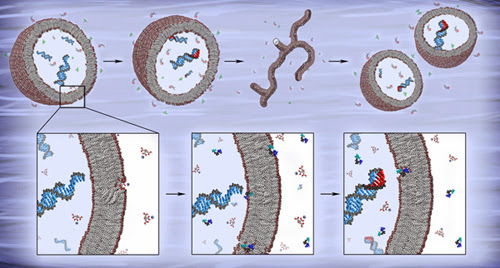 Lower sequence: RNA templates bound to short RNA primers within vesicles made of fatty acid membranes. Triangular complexes of Mg2+ ion, required for RNA replication, chelated with citrate to protect the membrane from damage, pass into the cell and catalyze extension of the RNA primer (red).

Szostak's team has been working for more than a decade to understand how the first cells developed from a "primordial soup" of chemicals into living organisms capable of copying their genetic material and reproducing. Part of that work is developing a model protocell made from components probably present in the primitive Earth environment. They have made significant progress towards developing cell membranes from the kind of fatty acids that would have been abundant and naturally form themselves into bubble-like vesicles when concentrated in water. But the genetic component – an RNA or DNA molecule capable of replication – has been missing.

Since the primitive environment in which such cells could have developed would not have had the kind of complex enzymes that modern cells use in replicating nucleic acids, Szostak and lead author Katarzyna Adamala, PhD, then a graduate student in Szostak's lab, investigated whether simple chemical processes could drive nonenzymatic replication of RNA, which many scientists believe was the first nucleic acid to develop.

To address the incompatibility between the need for Mg2+ to drive assembly of the RNA molecule and the ion's ability to degrade fatty acid membranes, they tested several chelators – small molecules that bind tightly to metal ions – for their ability to protect fatty acid vesicles from the potentially destabilizing effects of Mg2+. Citrate and several other chelators were found to be effective in protecting the membranes of fatty acid vesicles from disruption.

To test whether the presence of the tested chelators would allow Mg2+-catalyzed RNA assembly, the investigators placed molecules consisting of short primer RNA strands bound to longer RNA templates into fatty acid vesicles. The unbound, single-strand portion of the template consisted of a sequence of cytosine (C) nucleotides. In the presence of Mg2+ and one of four chelating molecules, one of which was citrate, the researchers then added activated G, the nucleotide that base-pairs with C in nucleic acids.

The desired reaction – diffusion of G nucleotides through the vesicle membrane to complete a double-stranded RNA molecule by binding to the C nucleotides of the template – proceeded fastest in the presence of citrate. In fact two of the other tested chelators completely prevented extension of the RNA primer.

"While other molecules can protect membranes against the magnesium ion," Szostak explains, "they don't let RNA chemistry go on. We think that citrate is able both to protect membranes and to allow RNA copying to proceed by covering only one face to the magnesium ion, protecting the membrane while allowing RNA chemistry to work." He and Adamala also found that continually refreshing the activated guanine nucleotide solution by flushing out broken down molecules and adding fresh nucleotides improved the efficiency of RNA replication.

Szostak notes that, while citrate may be appropriate for creating artificial cells in a laboratory environment, which he and his team are pursuing, it probably would not have been present in sufficient quantities in the early earth. "We have shown there is at least one way to make RNA replication chemistry compatible with primitive, fatty-acid-based cell membranes, but this opens up new questions. Our current best guess is there must have been some sort of simple peptides that acted in a similar way to citrate, and finding such peptides is something we are working on now."

A co-recipient of the 2009 Nobel Prize in Physiology or Medicine for his contribution to the discovery of the enzyme telomerase, Szostak is a professor of Genetics at Harvard Medical School and a Howard Hughes Medical Institute investigator. Adamala, who worked in Szostak's lab as part of her doctoral studies at Roma Tre University in Italy, is now a postdoctoral fellow at Massachusetts Institute of Technology. The study was supported, in part, by NASA Exobiology grant NNX07AJ09G.