Humankind has a weight problem – and not only in the industrialized nations, either: the growing prosperity in many Asian or Latin American countries goes hand in hand with a way of life that quite literally has hefty consequences. According to the WHO, over half the population in many industrialized nations is overweight, one in three people extremely so. Not only is high-calorie and fatty food a lifetime on the hips, backside and stomach; it also leaves traces in the blood, where various fats ingested via food circulate. Increased blood-fat values are also regarded as a risk factor for heart attacks and strokes.

The research group headed by ETH-Zurich professor Martin Fussenegger from the Department of Biosystems Science and Engineering in Basel has now de-veloped an early warning system and treatment: an implantable genetic circuit mainly composed of human gene components. On the one hand, it constantly monitors the circulating fat levels in the blood. On the other hand, it has a feed-back function and forms a messenger substance in response to excessively high blood-fat levels that conveys a sense of satiety to the body. 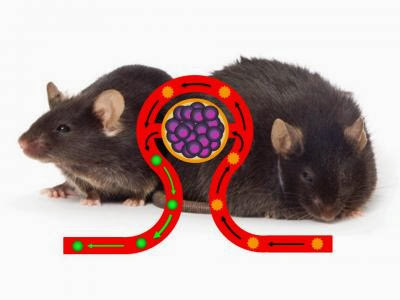 In order to construct this highly complex regulatory circuit, the biotechnologists skilfully combined different genes that produce particular proteins and reaction steps. They implanted the construct in human cells, which they then inserted into tiny capsules.

The researchers studied obese mice that had been fed fatty food. After the cap-sules with the gene regulatory circuit had been implanted in the animals and intervened due to the excessive levels, the obese mice stopped eating and their bodyweight dropped noticeably as a result. As the blood-fat levels also returned to normal, the regulatory circuit stopped producing the satiety signal.

"The mice lost weight although we kept giving them as much high-calorie food as they could eat," stresses Fussenegger. The animals ate less because the implant signalised a feeling of satiety to them. Mice that received normal animal feed with a five-per-cent fat content did not lose any weight or reduce their intake of food, says the biotechnologist.

One major advantage of the new synthetic regulatory circuit is the fact that it is not only able to measure one sort of fat, but rather several saturated and un-saturated animal and vegetable fats that are ingested with food at once. How-ever, this development cannot simply be transferred to humans. It will take many years to develop a suitable product. Nonetheless, Fussenegger can certainly envisage that one day obese people with a body mass index of way over thirty could have such a gene network implanted to help them lose weight. Fussenegger sees the development as a possible alternative to surgical inter-ventions such as liposuction or gastric bands. "The advantage of our implant would be that it can be used without such invasive interventions." Another merit: instead of intervening in the progression of a disease that is difficult to regulate, it has a preventive effect and exploits the natural human satiety mechanism.

This gene network is one of the most complex that Fussenegger and his team have constructed to date and was made possible thanks to the biotechnologist's years of experience in the field. It is not the first time he and his team have suc-ceeded in constructing such a complex feedback regulatory circuit: a number of years ago, they produced an implant that can also be used to combat gout via a feedback regulatory circuit.