NASA's Hubble Space Telescope has revealed the first visual evidence of how our home galaxy, the Milky Way, assembled itself into the majestic pinwheel of stars we see today.

Astronomers used Hubble's deep-sky surveys to study the evolution of 400 galaxies similar to the Milky Way and noted their appearance at various stages of development over a time span of 11 billion years. Judging from images of these far-flung galaxies, they found the Milky Way likely began as faint, blue, low-mass object containing lots of gas. Gas is the fuel for star birth and the blue color is an indicator of rapid star formation. 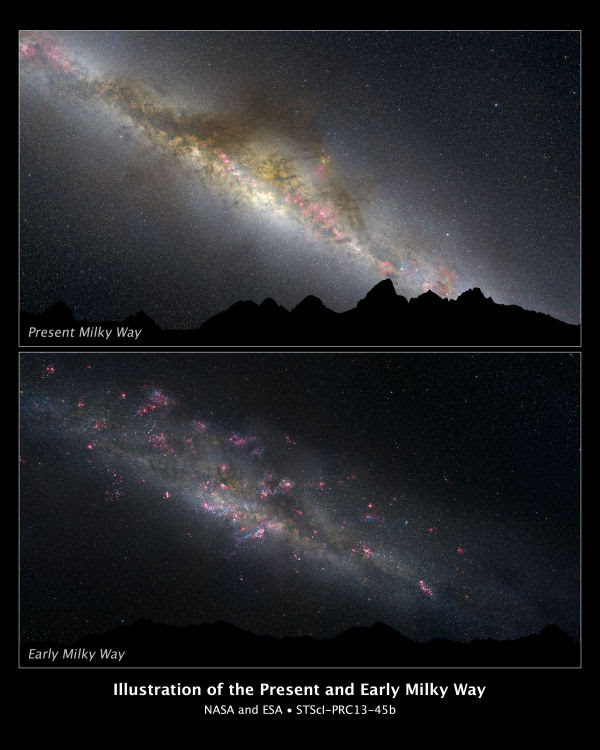 They also found the Milky Way probably was a flat disk with a bulge in the middle, both of which grew simultaneously into the majestic spiral seen today. The sun and Earth reside in the disk and the bulge is both full of older stars and home to a supermassive black hole that probably grew along with the galaxy.

"For the first time, we have direct images of what the Milky Way looked like in the past," said study co-leader Pieter G. van Dokkum of Yale University in New Haven, Conn. "Of course, we can't see the Milky Way itself in the past. We selected galaxies billions of light-years away that will evolve into galaxies like the Milky Way. By tracing the Milky Way's siblings, we find that our galaxy built up 90 percent of its stars between 11 billion and 7 billion years ago, which is something that has not been measured directly before."

The Hubble telescope's superior resolving power, with which it can see extremely fine details, allowed the researchers to study how the structure of the Milky Way changed over time. At the peak of star formation, when the universe was about 4 billion years old, the Milky Way-like galaxies were pumping out about 15 stars a year. By comparison, the Milky Way today is creating only one star a year.

"You can see that these galaxies are fluffy and spread out," said study co-leader Shannon Patel of Leiden University in The Netherlands. "There is no evidence of a bulge without a disk, around which the disk formed later." Team member Erica Nelson, of Yale University, added: "These galaxies show us the whole Milky Way grew at the same time, unlike more massive elliptical galaxies, in which the central bulge forms first."

To identify the far-flung galaxies and study them in detail, the research team used three of the largest Hubble programs, the 3D-HST survey, the Cosmic Assembly Near-infrared Deep Extragalactic Legacy Survey and the Great Observatories Origins Deep Survey. These surveys combined spectroscopy with visible and near-infrared imaging by Hubble's Wide Field Camera 3 and Advanced Camera for Surveys.

The research team's analysis involved measuring the distances and sizes of the galaxies. The astronomers calculated the mass of each galaxy from its brightness and colors. They selected the galaxies in their census from a catalog they compiled of more than 100,000 galaxies. The survey galaxies are consistent with computer models, which show at early stages, a majority of the bulges of spiral galaxies were built up at the same time as their corresponding disks.

"In these observations, we're capturing most of the evolution of the Milky Way," explained team member Joel Leja of Yale University. "These deep surveys allow us to see the smaller galaxies. In previous observations we could only see the most luminous galaxies in the distant past, and now we can look at more normal galaxies. Hubble gives us the shapes and colors of these spirals as well as their distances from Earth. We also can measure the rates at which each part of the galaxies grew. All of this is difficult to do from the ground."

Shannon Patel
The Observatories of the Carnegie Institution for Science

For images and more information about the Milky Way’s formative years, visit:
http://hubblesite.org/news/2013/45 and http://www.nasa.gov/hubble
on November 14, 2013