A deadly menace stalks the loons, gulls and other water birds of the Great Lakes region: Type E botulism, a neuromuscular disease caused when birds eat fish infected with toxin-producing bacteria. Cases of the disease are on the rise, killing approximately 10,000 more waterfowl in 2007 than when it was first reported in 1963.

To understand die-off origin and distribution, ocean engineers from the Florida Atlantic University (FAU) Institute for Ocean Systems Engineering in Dania Beach, Florida are using their expertise in experimental hydrodynamics. They have teamed with the U.S. Geological Survey to help develop a novel way of tracking waterfowl carcasses to determine the source of lethal outbreaks that infect fish eaten by waterbirds.

This image shows experimental measurement of the drag on a partially submerged waterbird in waves. 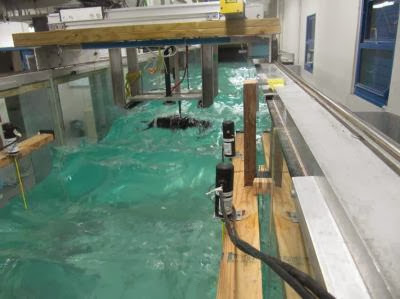 Monitoring the drift of waterbird carcasses associated with marine oil spills is another potential application. At the annual meeting of the American Physical Society's Division of Fluid Dynamics, held Nov. 24 ­ 26 in Pittsburgh, Pa., the team will present experimental measurements conducted to support the development of tracking software that will better determine the origin of waterbird die-offs.

The team performed towing tank experiments on submerging bird carcasses to determine the relevant drag coefficients. Together with wind and current data, these coefficients can be used in probabilistic source tracking simulations to calculate waterbird drift velocity and direction in order to reconstruct the likely routes that bird bodies may have traveled after a die-off.

Ultimately, this information will be compared to waterbird distribution and abundance revealed through aerial surveys to identify locations where waterbirds are likely exposed to botulinum toxin, explained Karl von Ellenrieder of FAU.

"Using the submerged frontal area of an ellipse, together with the frontal area of any submerged portions of the bird's head and neck gives good similarity across the range of speeds and submergence levels tested," von Ellenrieder said. "This is the first effort we are aware of to obtain estimates of force parameters operating on drifting waterbirds for incorporation into a current and waved-based tracking model."