Gigantism: Did Something In The Air Cause Dinosaur To Become Giants

An international team of researchers led by Ralf Tappert, University of Innsbruck, reconstructed the composition of the Earth's atmosphere of the last 220 million years by analyzing modern and fossil plant resins. The results suggest that atmospheric oxygen was considerably lower in the Earth's geological past than previously assumed. This new study questions some of the current theories about the evolution of climate and life, including the causes for the gigantism of dinosaurs.

The team analyzed amber samples from almost all well-known amber deposits worldwide. This amber originates from the Cretaceous period, an inclusion of foilage of the extinct conifer tree Parataxodium sp. from the Foremost Formation at Grassy Lake, Alberta, Canada. It is approximately 77 million years old. 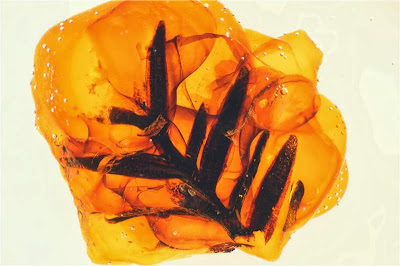 Scientists encounter big challenges when reconstructing atmospheric compositions in the Earth's geological past because of the lack of useable sample material. One of the few organic materials that may preserve reliable data of the Earth's geological history over millions of years are fossil resins (e.g. amber). “Compared to other organic matter, amber has the advantage that it remains chemically and isotopically almost unchanged over long periods of geological time,” explains Ralf Tappert from the Institute of Mineralogy and Petrography at the University of Innsbruck. 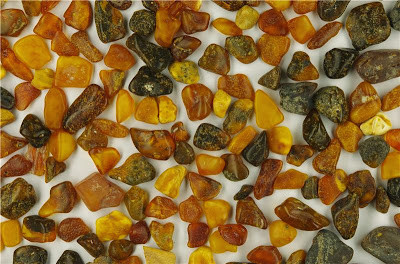 The mineralogist and his colleagues from the University of Alberta in Canada and universities in the USA and Spain have produced a comprehensive study of the chemical composition of the Earth's atmosphere since the Triassic period. The study has been published in the journal Geochimica et Cosmochimica Acta. The interdisciplinary team, consisting of mineralogists, paleontologists and geochemists, use the preserving properties of plant resins, caused by polymerization, for their study.

“During photosynthesis plants bind atmospheric carbon, whose isotopic composition is preserved in resins over millions of years, and from this, we can infer atmospheric oxygen concentrations,” explains Ralf Tappert. The information about oxygen concentration comes from the isotopic composition of carbon or rather from the ratio between the stable carbon isotopes 12C and 13C.

Atmospheric oxygen between 10 and 15 percent

The research team analyzed a total of 538 amber samples from from well-known amber deposits worldwide, with the oldest samples being approximately 220 million years old and recovered from the Dolomites in Italy. The team also compared fossil amber with modern resins to test the validity of the data. The results of this comprehensive study suggest that atmospheric oxygen during most of the past 220 million years was considerably lower than today's 21 percent.

Modern resins were also used for the study: Here fresh resin, the raw material for amber, is oozing out of the trunk of an Araucaria tree (Araucaria cunninghamii) in Adelaide Botanical Garden, Australia. 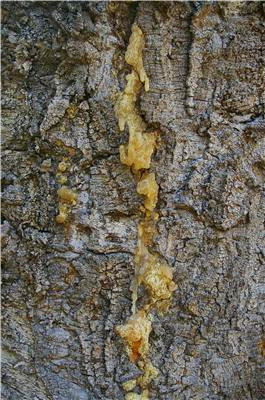 “We suggest numbers between 10 and 15 percent,” says Tappert. These oxygen concentrations are not only lower than today but also considerably lower than the majority of previous investigations propose for the same time period. For the Cretaceous period (65 - 145 million years ago), for example, up to 30 percent atmospheric oxygen has been suggested previously.

Effects on climate and environment

The researchers also relate this low atmospheric oxygen to climatic developments in the Earth's history. “We found that particularly low oxygen levels coincided with intervals of elevated global temperatures and high carbon dioxide concentrations,” explains Tappert. The mineralogist suggests that oxygen may influence carbon dioxide levels and, under certain circumstances, might even accelerate the influx of carbon dioxide into the atmosphere.

“Basically, we are dealing here with simple oxidation reactions that are amplified particularly during intervals of high temperatures such as during the Cretaceous period.” The researchers, thus, conclude that an increase in carbon dioxide levels caused by extremely strong vulcanism was accompanied by a decrease of atmospheric oxygen. This becomes particularly apparent when looking at the last 50 million years of geological history. Following the results of this study, the comparably low temperatures of the more recent past (i.e. the Ice Ages) may be attributed to the absence of large scale vulcanism events and an increase in atmospheric oxygen.

Oxygen may not be the cause of gigantism

According to the results of the study, oxygen may indirectly influence the climate. This in turn may also affect the evolution of life on Earth. A well-known example are dinosaurs: Many theories about animal gigantism offer high levels of atmospheric oxygen as an explanation. Tappert now suggests to reconsider these theories: “We do not want to negate the influence of oxygen for the evolution of life in general with our study, but the gigantism of dinosaurs cannot be explained by those theories.” The research team highly recommends conducting further studies and intends to analyze even older plant resins.

Contacts and sources:
University of Innsbruck
on November 18, 2013