Gemini observations support an unexpected discovery in the galaxy Messier 101. A relatively small black hole (20-30 times the mass of our Sun) can sustain a hugely voracious appetite while consuming material in an efficient and tidy manner – something previously thought impossible. The research also affects the long quest for elusive intermediate-mass black holes. The findings are published in the November 28, 2013, issue of the journal Nature. 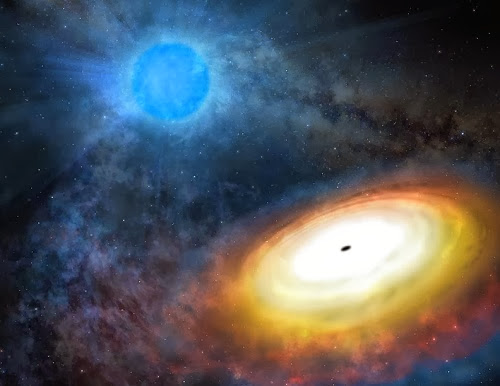 Observations of a black hole powering an energetic X-ray source in a galaxy some 22 million light-years away could change our thinking about how some black holes consume matter. The findings indicate that this particular black hole, thought to be the engine behind the X-ray source’s high-energy light output, is unexpectedly lightweight, and, despite the generous amount of dust and gas being fed to it by a massive stellar companion, it swallows this material in a surprisingly orderly fashion.

“It has elegant manners,” says research team member Stephen Justham, of the National Astronomical Observatories of China, Chinese Academy of Sciences. Such lightweights, he explains, must devour matter at close to their theoretical limits of consumption to sustain the kind of energy output observed. "We thought that when small black holes were pushed to these limits, they would not be able to maintain such refined ways of consuming matter," Justham explains. "We expected them to display more complicated behavior when eating so quickly. Apparently we were wrong." 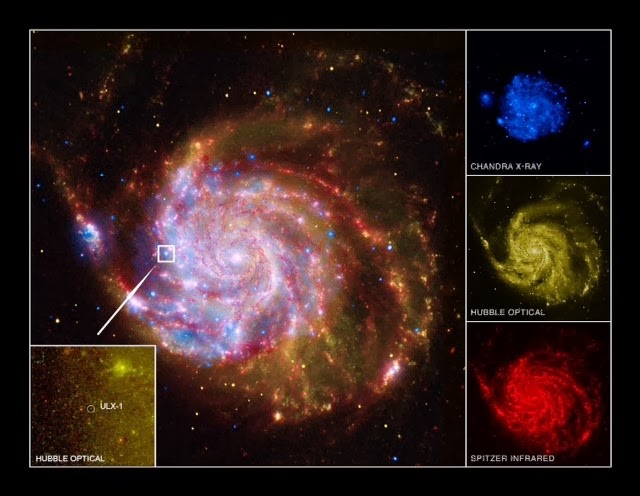 In a surprising twist, however, the new observations made at the Gemini Observatory, and published in the November 28th issue of the journal Nature, indicate that M101 ULX-1’s black hole is on the small side, and astrophysicists don’t understand why.

In theoretical models of how matter falls into black holes and radiates energy, the soft X-rays come primarily from the accretion disk (see illustration), while hard X-rays are typically generated by a high-energy “corona” around the disk. The models show that the corona’s emission strength should increase as the rate of accretion gets closer to the theoretical limit of consumption. Interactions between the disk and corona are also expected to become more complex.

Based on the size of the black hole found in this work, the region around M101-ULX-1 should, theoretically, be dominated by hard X-rays and appear structurally more complicated. However, that isn’t the case.

“Theories have been suggested which allow such low-mass black holes to eat this quickly and shine this brightly in X-rays. But those mechanisms leave signatures in the emitted X-ray spectrum, which this system does not display,” says lead author Jifeng Liu, of the National Astronomical Observatories of China, Chinese Academy of Sciences. “Somehow this black hole, with a mass only 20-30 times the mass of our Sun, is able to eat at a rate near to its theoretical maximum while remaining relatively placid. It’s amazing. Theory now needs to somehow explain what’s going on.”

The discovery also delivers a blow to astronomers hoping to find conclusive evidence for an “intermediate-mass” black hole in M101 ULX-1. Such black holes would have masses roughly between 100 and 1000 times the mass of the Sun, placing them between normal stellar-mass black holes and the monstrous supermassive black holes that reside in the centers of galaxies. So far these objects have been frustratingly elusive, with potential candidates but no broadly-accepted detection. Ultra-luminous X-ray sources (ULXs) have been one of the main proposed hiding places for intermediate-mass black holes, and M101 ULX-1 was one of the most promising-looking contenders.

“Astronomers hoping to study these objects will now have to focus on other locations for which indirect evidence of this class of black holes has been suggested, either in the even brighter ‘hyper-luminous’ X-ray sources or inside some dense clusters of stars,” explains research team member Joel Bregman of the University of Michigan.

“Many scientists thought it was just a matter of time until we had evidence for an intermediate-mass black hole in M101 ULX-1,” says Liu. But the new Gemini findings both take away some of that hope to solve an old puzzle and adds the fresh mystery of how this stellar-mass black hole can consume matter so calmly.

To determine the mass of the black hole, the researchers used the Gemini Multi-Object Spectrograph at the Gemini North telescope on Mauna Kea, Hawai‘i to measure the motion of the companion. This star, which feeds matter to the black hole, is of the Wolf-Rayet variety. Such stars emit strong stellar winds, from which the black hole can then draw in material. This study also revealed that the black hole in M101 ULX-1 can capture more material from that stellar wind than astronomers had anticipated.

M101 ULX-1 is ultra-luminous, shining a million times more brightly than the Sun in both X-rays (from the black hole accretion disk) and in the ultraviolet (from the companion star). Co-author Paul Crowther from the University of Sheffield in the United Kingdom adds, "Although this isn't the first Wolf-Rayet black hole binary ever discovered, at some 22 million light-years away, it does set a new distance record for such a system. The Wolf-Rayet star will have died in a small fraction of the time it has taken for light to reach us, so this system is now likely a double black hole binary."

“Studying objects like M101 ULX-1 in distant galaxies gives us a vastly larger sampling of the diversity of objects in our universe,” says Bregman. “It’s absolutely amazing that we have the technology to observe a star orbiting a black hole in another galaxy this far away.”