For decades, astronomers have sought strong evidence that the supermassive black hole at the center of our Milky Way galaxy is producing a jet of high-energy particles. Based on new results from NASA's Chandra X-ray Observatory and the National Science Foundation's Very Large Array radio telescope, they now have it.

New evidence has been uncovered indicating the presence of a jet of high-energy particles blasting out of the Milky Way's supermassive black hole, Sagittarius A*. This composite image features both X-rays from NASA's Chandra X-ray Observatory (purple) and radio emission from the the NSF's Very Large Array (blue). The location of a shock front is also marked. 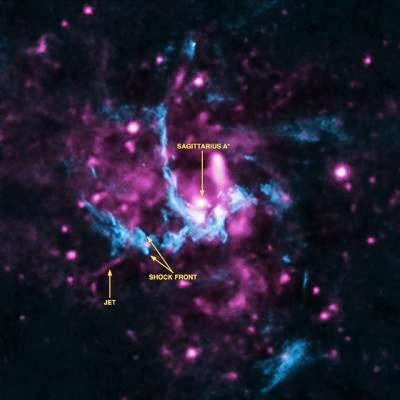 Previous studies that used a variety of telescopes suggested there was a jet, but these reports, including the orientation of the suspected jets, often contradicted one another and were not considered definitive.

"Almost all supermassive black holes that we are able to closely examine display jets as a response to the gaseous material falling into them," said Mark Morris, a professor of physics and astronomy in the UCLA College of Letters and Science and a co-author of the research. "So the absence of an obvious jet from the supermassive black hole at the center of our own galaxy has been somewhat of a puzzle until now. By finding this new evidence for a jet from our galaxy's black hole, we can conclude that our hometown Goliath may be fairly normal."

The research will published in an upcoming print edition of the Astrophysical Journal and is currently available online.

Jets of high-energy particles are found throughout the universe, on both large and small scales. They are produced by young stars and by black holes up to a thousand times larger than the Milky Way's enormous black hole. They play important roles in producing energy and transporting this energy away as jets, which then regulate the rate of formation of new stars in surrounding regions.

The new data strongly suggest this is also true of our black hole, known as Sagittarius A* or Sgr A*.

"We were very eager to find a jet from Sgr A* because it tells us the direction of the black hole's spin axis," Morris said. "This gives us important clues about the growth history of the black hole."

The study indicates that the spin axis of Sgr A* is parallel to the rotation axis of the Milky Way, which suggests to astronomers that gas and dust have migrated steadily into Sgr A* over the past 10 billion years from the rest of the galaxy without any major perturbations. If the Milky Way had collided with large galaxies in the recent past and their central black holes had merged with Sgr A*, the jet could point in any direction.

The jet appears to be running into a gas cloud near Sgr A*, producing X-rays detected by Chandra and radio emissions observed by the NSF's Very Large Array. The two key pieces of evidence for the jet are a straight line of X-ray–emitting gas that points toward Sgr A* and a shock front, similar to a sonic boom, seen in radio data, where the jet appears to be striking the gas. The energy signature, or spectrum, in X-rays of Sgr A* resembles that of jets coming from supermassive black holes in other galaxies.

Scientists think jets are produced when some material falling toward the black hole is redirected outward. Since Sgr A* is known to be currently consuming very little material, it is not surprising the jet appears weak. The jet is one-sided — that is, nothing is seen in the opposite direction — possibly because of a lack of gas on that side for the jet to run into.

The region around Sgr A* is faint, which means the black hole has been quiet in the past few hundred years, Morris said. A separate Chandra study announced last month shows that it was at least a million times brighter before that.

Zhiyuan Li of Nanjing University in China, who was recently an assistant researcher at UCLA, is the lead author of the new study; Frederick Baganoff of the Massachusetts Institute of Technology is a co-author.

"We know this giant black hole has been much more active at consuming material in the past," Baganoff said. "When it stirs again, the jet may brighten dramatically."

Astronomers have suggested that giant bubbles of high-energy particles extending out from the Milky Way and detected by NASA's Fermi Gamma Ray Telescope in 2008 are caused by jets from Sgr A* that are aligned with the rotational axis of the galaxy. The latest results support this explanation.

The supermassive black hole at the center of the Milky Way is some 26,000 light-years away from Earth, with a mass approximately 4 million times that of the sun. The Chandra observations in this study were taken between September 1999 and March 2011.

Black holes, which form out of the collapse of matter, have such high density that nothing can escape their gravitational pull, not even light. They cannot be seen directly, but their influence on nearby stars is visible and provides a signature.