An international team of scientists has shown for the first time that atoms can work collectively rather than independently of each other to share light.  This work is expected to have future applications in advanced quantum devices.

Quantum physicists have long discussed such an effect, but it has not been seen before in an experiment.

The chip containing the superconducting circuits used in the quantum physics experiment published this week in Science had an identical design to this one. 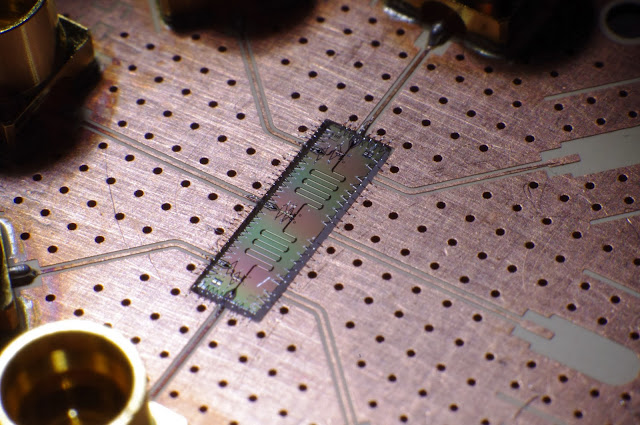 The researchers showed the sharing of light or “photon-mediated interaction” between artificial atoms confined to a one-dimensional quantum system.

Their paper, “Photon-mediated interactions between distant artificial atoms,” is published this week in the journal Science.

“It’s an unobserved effect that has been discussed for decades, and we see it with excellent agreement between theory and experiment,” says co-author Barry Sanders, a researcher in the Department of Physics and Astronomy and iCORE Chair of Quantum Information Science.

The two artificial atoms “showed a coherent exchange interaction, something not seen before for distant quantum systems in an open environment,” says lead author Arjan van Loo, a PhD student in the Quantum Device Lab at ETH Zürich.

An illustration of the artificial atoms or “qubits” alongside the one-dimensional “waveguide” or transmission line. 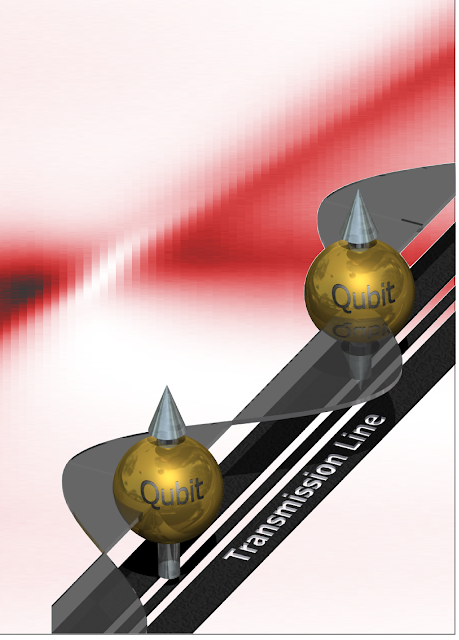 This research shows that “man-made electrical circuits can now be engineered in such a way to exhibit behaviour that is not possible in ‘natural’ quantum systems,” says co-author Alexandre Blais, associate professor of physics at Université de Sherbrooke.

Getting artificial atoms to work collectively could lead to control of microwave fields in superconducting circuits with benefits, including ways to protect quantum information against “noise” or damage to the signal, says Sanders, director of the University of Calgary’s Institute for Quantum Science and Technology. “I think what we’ve shown is going to be critical for future applications.”

The key to the team’s approach was to do the experiment in one dimension rather than in three dimensions where the interaction between atoms is weak and declines significantly with distance.

“In our experiment, we surpassed these limitations by specially engineering the critical properties of our artificial quantum systems,” says co-author Arkady Fedorov, a postdoc at ETH Zürich when the experiment was done, and now a group leader at the ARC Centre for Excellence for Engineered Quantum Systems at the University of Queensland in Australia.

The researchers confined two artificial atoms to one dimension using a waveguide (similar to confining light in an optical fibre), which greatly increased the possibility of the two systems interacting and enabled the researchers to measure this interaction.

Using superconducting circuits, the team was able to put two artificial atoms alongside the waveguide and then send a microwave field through this one-dimensional waveguide.

At a distance of approximately two centimetres – much larger than typically expected for quantum systems – the two atom-like systems formed a type of weakly bound molecule, due to the exchange of photons (‘particles’ of light).

“We also observed how the superconducting circuits either synchronize to emit radiation much more efficiently displaying superradiance (a very bright source of radiation), or how the circuits trap radiation, turning the two systems dark, as they do not emit photons anymore,” Wallraff says.

The Canadian theorists used the “Mammouth” supercomputer that is part of a national high-performance computing platform coordinated by Compute Canada to solve analytical equations. They “also worked a lot with the experimentalists to understand intuitively the physics going on,” says co-author Kevin Lalumière, a PhD student in physics at Université de Sherbrooke.Financial support for the research was provided by the Canadian Institute for Advanced Research, Natural Sciences and Engineering Council of Canada, ETH Zürich and Alberta Innovates Technology Futures.Futures.


Contacts and sources:
By Mark Lowey
University of Calgary
on November 15, 2013