Dismantling Syria’s Chemical Weapons In The Midst Of War

Syria no longer has the capacity to produce new chemical weapons en masse, but arms control experts caution that what remains is the more difficult job of destroying the existing stockpile in the midst of the country's brutal civil war. An article in Chemical & Engineering News, the weekly newsmagazine of the American Chemical Society, details the challenges involved. 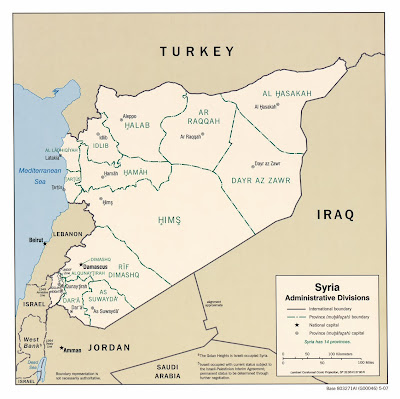 Glenn Hess, a senior editor at C&EN, explains that close to 1,400 tons of chemical weapons are stored at 23 locations scattered throughout Syria. To destroy this stockpile, officials will need multiple strategies. The most dangerous are the munitions filled with "live" chemical agents, such as mustard gas, sarin and VX.

Dealing with these weapons will require bringing specialized equipment into the war-torn country. Chemicals that serve as precursor ingredients for warfare agents are more stable and will be simpler to neutralize — though disposal teams will likely have to navigate through a violent landscape to transport them out of country to a safer environment for handling.

The article notes that the "live" agents could be destroyed by the agreed-upon mid-2014 deadline, but neutralizing the precursor chemicals could take longer. The Hague-based Organization for the Prohibition of Chemical Weapons, tasked with overseeing the chemical disarmament deal struck between the U.S., Russia and Syria in September, was set to meet Nov. 15 (after C&EN press time) to adopt a schedule for destroying the stockpile.