On April 27, a blast of light from a dying star in a distant galaxy became the focus of astronomers around the world. The explosion, known as a gamma-ray burst and designated GRB 130427A, tops the charts as one of the brightest ever seen.

In the most common type of gamma-ray burst, illustrated here, a dying massive star forms a black hole (left), which drives a particle jet into space. Light across the spectrum arises from hot gas near the black hole, collisions within the jet, and from the jet's interaction with its surroundings. 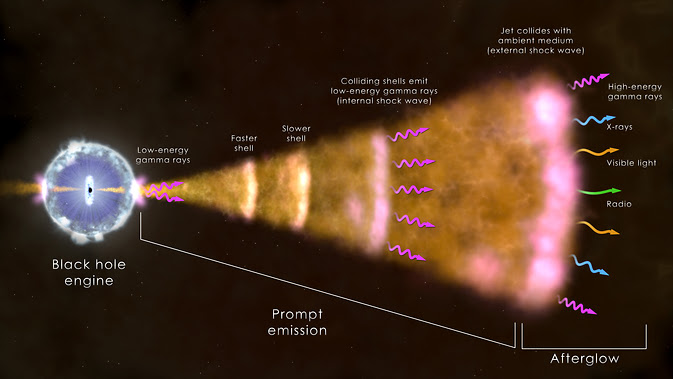 This animation shows the most common type of gamma-ray burst, thought to occur when a massive star collapses, forms a black hole, and blasts particle jets outward at nearly the speed of light. Viewing into a jet greatly boosts its apparent brightness. A Fermi image of GRB 130427A ends the sequence.

"We expect to see an event like this only once or twice a century, so we're fortunate it happened when we had the appropriate collection of sensitive space telescopes with complementary capabilities available to see it," said Paul Hertz, director of NASA's Astrophysics Division in Washington.

These maps show the sky at energies above 100 MeV as seen by Fermi's LAT instrument. Left: The sky during a 3-hour interval before GRB 130427A. Right: A 3-hour map ending 30 minutes after the burst. GRB 130427A was located in the constellation Leo, near its border with Ursa Major. 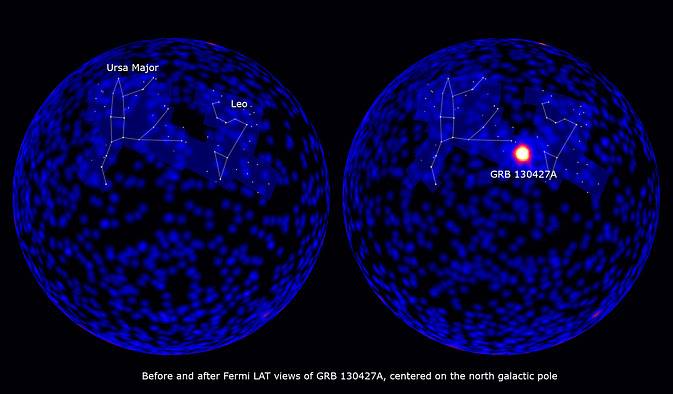 Gamma-ray bursts are the most luminous explosions in the cosmos, thought to be triggered when the core of a massive star runs out of nuclear fuel, collapses under its own weight, and forms a black hole. The black hole then drives jets of particles that drill all the way through the collapsing star and erupt into space at nearly the speed of light.

Gamma-rays are the most energetic form of light. Hot matter surrounding a new black hole and internal shock waves produced by collisions within the jet are thought to emit gamma-rays with energies in the million-electron-volt (MeV) range, or roughly 500,000 times the energy of visible light. The most energetic emission, with billion-electron-volt (GeV) gamma rays, is thought to arise when the jet slams into its surroundings, forming an external shock wave.

"The spectacular results from Fermi GBM show that our widely accepted picture of MeV gamma rays from internal shock waves is woefully inadequate," said Rob Preece, a Fermi team member at the University of Alabama in Huntsville who led the GBM study.

Swift's X-Ray Telescope took this 0.1-second exposure of GRB 130427A at 3:50 a.m. EDT on April 27, just moments after Fermi and Swift detected the outburst. The image is 6.5 arcminutes across. 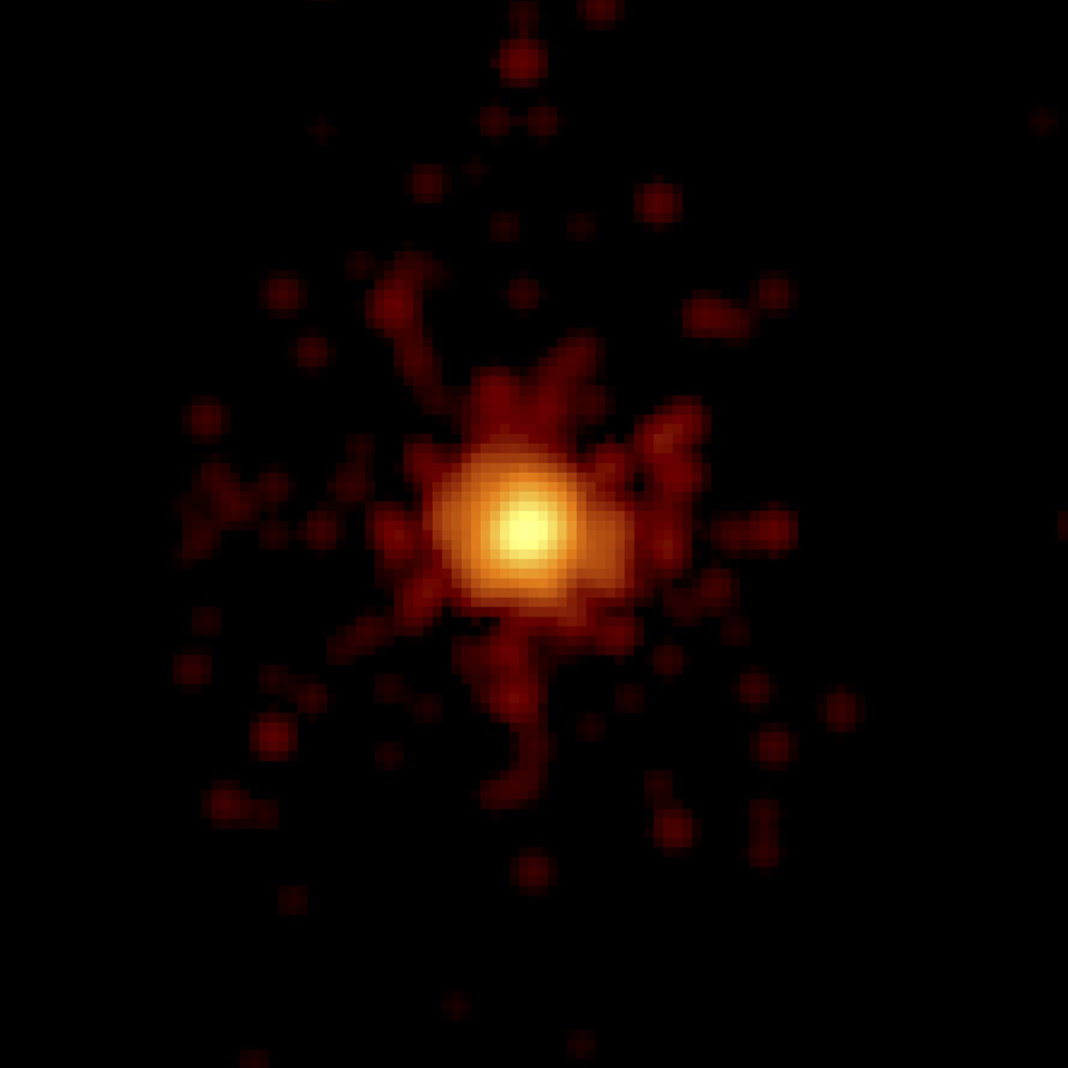 Telescopes operated by Los Alamos National Laboratory in New Mexico as part of the Rapid Telescopes for Optical Response (RAPTOR) Project quickly turned to the spot. They detected an optical flash that peaked at magnitude 7 on the astronomical brightness scale, easily visible through binoculars. It is the second-brightest flash ever seen from a gamma-ray burst.

Just as the optical flash peaked, Fermi's Large Area Telescope (LAT) detected a spike in GeV gamma-rays reaching 95 GeV, the most energetic light ever seen from a burst. This relationship between a burst's optical light and its high-energy gamma-rays defied expectations.

"We thought the visible light for these flashes came from internal shocks, but this burst shows that it must come from the external shock, which produces the most energetic gamma-rays," said Sylvia Zhu, a Fermi team member at the University of Maryland in College Park.

The LAT detected GRB 130427A for about 20 hours, far longer than any previous burst. For a gamma-ray burst, it was relatively nearby. Its light traveled 3.8 billion years before arriving at Earth, about one-third the travel time for light from typical bursts.

"Detailed observations by Swift and ground-based telescopes clearly show that GRB 130427A has properties more similar to typical distant bursts than to nearby ones," said Gianpiero Tagliaferri, a Swift team member at Brera Observatory in Merate, Italy.

This extraordinary event enabled NASA's newest X-ray observatory, the Nuclear Spectroscopic Telescope Array (NuSTAR), to make a first-time detection of a burst afterglow in high-energy, or "hard," X-rays after more than a day. Taken together with Fermi LAT data, these observations challenge long-standing predictions.

This movie shows GRB 130427A as viewed by the RAPTOR telescopes located near Los Alamos, N.M, and on Mount Haleakala on the island of Maui, Hawaii. The movie opens with wide-field images acquired by a RAPTOR All-Sky Monitor, one of the three identical systems to first detect the burst's optical flash. The movie then switches to observations from RAPTOR-T, which autonomously turned toward the burst after receiving an alert from NASA's Swift. The telescope imaged the burst for 2 hours and captured simultaneous images in four different colors.

GRB 130427A is the subject of five papers published online Nov. 21. Four of these, published by Science Express, highlight contributions by Fermi, Swift and RAPTOR. The NuSTAR study is published in The Astrophysical Journal Letters.

NASA's Fermi Gamma-ray Space Telescope is an international and multi-agency astrophysics and particle physics partnership managed by NASA's Goddard Space Flight Center in Greenbelt, Md., and supported by the U.S. Department of Energy's Office of Science. Goddard also manages NASA's Swift mission, which is operated in collaboration with Pennsylvania State University in University Park, Pa., and international partners. NASA's NuSTAR mission is led by the California Institute of Technology and managed by NASA's Jet Propulsion Laboratory, both in Pasadena, with contributions from international partners.

For images and video related to this release, visit: http://go.nasa.gov/17R2cf3

For more information about NuSTAR, visit: http://www.nasa.gov/nustar
on November 21, 2013