Catching Comet ISON, Where To See It

Hopes are high for Comet ISON, which has the potential to become the most spectacular comet seen in years. ISON is speeding through the inner solar system at about 120,000 miles per hour, on its way to a close approach to the Sun on November 28th. Assuming it survives its close encounter, it could become easily visible to the unaided eye in dawn skies.

Comet ISON recently brightened and is currently visible with telescopes or binoculars in the constellation Virgo. Today the Harvard-Smithsonian Center for Astrophysics (CfA) is releasing new images of ISON obtained with the MicroObservatory robotic telescope system.

The animated gif combines two separate 60-second exposures of ISON and shows the comet moving against a background of stars. The comet displays a fuzzy round coma and a tail extending to upper right beyond the edge of the frame.

These photos were taken on the morning of Saturday, November 9 by retired teacher Bruce Mellin using MicroObservatory's "Donald" telescope in Arizona. The 650 by 500 pixel images show an area of the sky 0.9 by 0.7 degrees in size. (For comparison, the Full Moon is half a degree across.)

MicroObservatory is a network of automated telescopes, developed by CfA scientists and educators, that can be controlled over the Internet. They were designed to enable students and teachers nationwide to investigate the wonders of the deep sky from their classrooms or after-school centers.

Students and teachers wanting to use the MicroObservatory telescopes can sign up online at http://mo-www.cfa.harvard.edu/OWN/index.html. 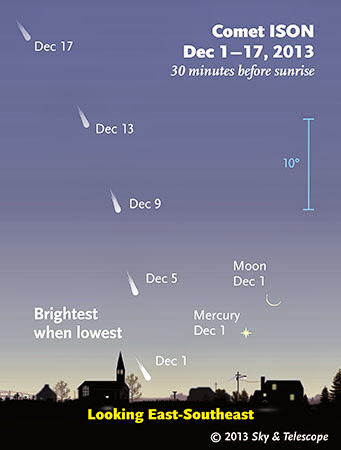 Comet ISON should at its best in early December 2013, climbing up the eastern dawn sky as it fades following its solar swing by. The comet symbols are probably very exaggerated; they're to show the area of sky to examine; bring binoculars.

The chart is drawn for skywatchers near 40° north latitude (Denver, New York, Madrid) but will do for most north temperate latitudes. The blue 10° scale is about the width of your fist held at arm's length. For more detailed charts, see the November and December issues of Sky & Telescope.


Contacts and sources:
David A. Aguilar
Harvard-Smithsonian Center for Astrophysics
on November 18, 2013