Biologists Find An Evolutionary Facebook For Monkeys And Apes

Why do the faces of some primates contain so many different colors — black, blue, red, orange and white — that are mixed in all kinds of combinations and often striking patterns while other primate faces are quite plain?

UCLA biologists reported last year on the evolution of 129 primate faces in species from Central and South America. This research team now reports on the faces of 139 Old World African and Asian primate species that have been diversifying over some 25 million years.

Old World monkeys and apes that are more social have more complex facial patterns. Species that have smaller group sizes tend to have simpler faces with fewer colors. 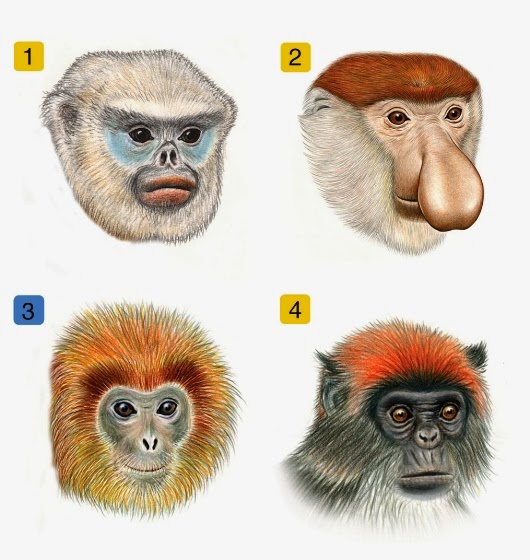 With these Old World monkeys and apes, the species that are more social have more complex facial patterns, the biologists found. Species that have smaller group sizes tend to have simpler faces with fewer colors, perhaps because the presence of more color patches in the face results in greater potential for facial variation across individuals within species. This variation could aid in identification, which may be a more difficult task in larger groups.

Species that live in the same habitat with other closely related species tend to have more complex facial patterns, suggesting that complex faces may also aid in species recognition, the life scientists found.

"Humans are crazy for Facebook, but our research suggests that primates have been relying on the face to tell friends from competitors for the last 50 million years and that social pressures have guided the evolution of the enormous diversity of faces we see across the group today," said Michael Alfaro, an associate professor of ecology and evolutionary biology in the UCLA College of Letters and Science and senior author of the study.

"Faces are really important to how monkeys and apes can tell one another apart," he said. "We think the color patterns have to do both with the importance of telling individuals of your own species apart from closely related species and for social communication among members of the same species."

With Old World monkeys and apes, the species that are more social have more complex facial patterns. Species that have smaller group sizes tend to have simpler faces with fewer colors 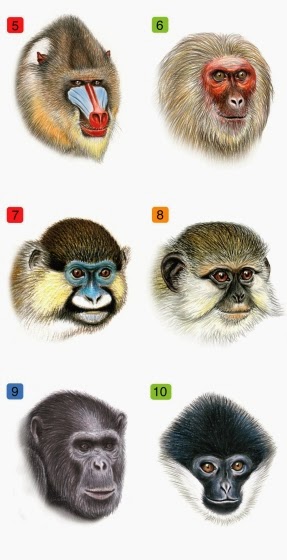 Most Old World monkeys and apes are social, and some species, like the mandrills, can live in groups with up to 800 members, said co-author Jessica Lynch Alfaro, an adjunct assistant professor in the UCLA Department of Anthropology and UCLA's Institute for Society and Genetics. At the other extreme are solitary species, like the orangutans. In most orangutan populations, adult males travel and sleep alone, and females are accompanied only by their young, she said. Some primates, like chimpanzees, have "fission–fusion societies," where they break up into small sub-groups and come together occasionally in very large communities. Others, like the hamadryas baboons, have tiered societies with harems, clans, bands and troops, she said.

"Our research suggests increasing group size puts more pressure on the evolution of coloration across different sub-regions of the face," Michael Alfaro said.

This allows members of a species to have "more communication avenues, a greater repertoire of facial vocabulary, which is advantageous if you're interacting with many members of your species," he said. 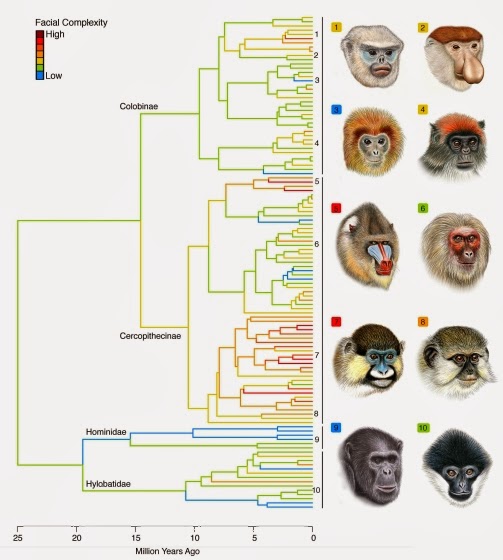 The research, federally funded by the National Science Foundation and supported through a postdoctoral fellowship from the UCLA Institute for Society and Genetics, was published Nov. 11 in the journal Nature Communications.

Lead study author Sharlene Santana used photographs of primate faces for her analysis and devised a new method to quantify the complex patterns of primate faces. She divided each face into several regions; classified the color of each part of the face, including the hair and skin; and assigned a score based on the total number of different colors across the facial regions. This numerical score is called the "facial complexity" score. The life scientists then studied how the complexity scores of primate faces were related to primates' social systems.

The habitat where species live presents many potential pressures that could have influenced the evolution of facial coloration. To assess how facial colors are related to physical environments, the researchers analyzed environmental variables such as geographic location, canopy density, rainfall and temperature. They also used statistical methods that took into account the evolutionary history and relationships among the primate groups to better understand the evolution of facial diversity and complexity.

While facial complexity was related to social variables, such as group size and the number of closely related species in the same habitat, facial pigmentation was best explained by ecological and spatial factors. Where a species lives is a good predictor of its degree of facial pigmentation — how light or dark the face is.

"Our map shows clearly the geographic trend in Africa of primate faces getting darker nearer to the equator and lighter as we move farther away from the equator," Lynch Alfaro said. "This is the same trend we see on an intra-species level for human skin pigmentation around the globe."

Species living in more tropical and more densely forested habitats also tend to have darker, more pigmented faces. But the complexity of facial color patterns is not related to habitat type.

The face of a vervet monkey illustrates the procedure used to characterize facial complexity. Faces of primates were divided into 10 areas that were used to record traits describing hair and skin color.

In their research on primates from Central and South America published last year, the scientists were surprised to find a different pattern. For these primates, species that lived in larger groups had more plain facial patterns.

"We expected to find similar trends across all primate radiations — that is, that the faces of highly social species would have more complex patterning," said Santana, who conducted the research as a postdoctoral fellow with the UCLA Department of Ecology and Evolutionary Biology and UCLA's Institute for Society and Genetics and who is now an assistant professor at the University of Washington and curator of mammals at the Burke Museum of Natural History and Culture. "We were surprised by the results in our original study on neotropical (Central and South American) primates."

"In the present study, great apes had significantly lower facial complexity compared to monkeys," Lynch Alfaro said. "This may be because apes are using their faces for highly complex facial expressions and these expressions would be obscured by more complex facial color patterns. There may be competing pressures for and against facial pattern complexity in large groups, and different lineages may solve this problem in different ways."

"Our research shows that being more or less social is a key explanation for the facial diversity that we see," Alfaro said. "Ecology is also important, such as camouflage and thermal regulation, but our research suggests that faces have evolved along with the diversity of social behaviors in primates, and that is the big cause of facial diversity."

Alfaro and his colleagues serve as "evolutionary detectives," asking what factors produced the patterns of species richness and diversity of traits.

"When evolutionary biologists see these striking patterns of richness, we want to understand the underlying causes," he said.

Human faces were not part of the analysis, although humans also belong to the "clade Catarrhini, which includes Old World monkeys and apes.

Andrew Noonan, a former UCLA undergraduate student who conducted research in Alfaros laboratory, was also a co-author of this research.

Contacts and sources:
By Stuart Wolpert
UCLA
on November 19, 2013