Scientists find that Mars, not Earth, shakes up some near-Earth asteroids.

For nearly as long as astronomers have been able to observe asteroids, a question has gone unanswered: Why do the surfaces of most asteroids appear redder than meteorites — the remnants of asteroids that have crashed to Earth? 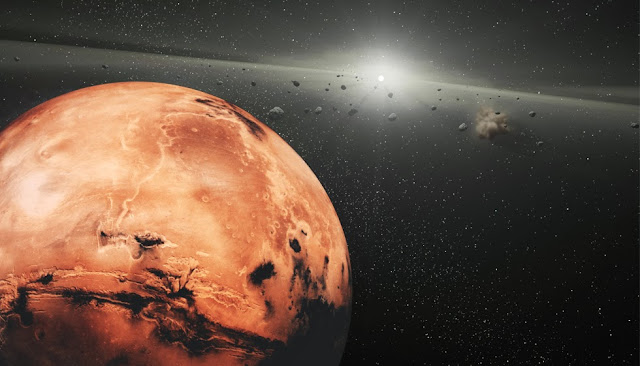 In 2010, Richard Binzel, a professor of planetary sciences at MIT, identified a likely explanation: Asteroids orbiting in our solar system’s main asteroid belt, situated between Mars and Jupiter, are exposed to cosmic radiation, changing the chemical nature of their surfaces and reddening them over time. By contrast, Binzel found that asteroids that venture out of the main belt and pass close to Earth feel the effects of Earth’s gravity, causing “asteroid quakes” that shift surface grains, exposing fresh grains underneath. When these “refreshed” asteroids get too close to Earth, they break apart and fall to its surface as meteorites.

Since then, scientists have thought that close encounters with Earth play a key role in refreshing asteroids. But now Binzel and colleague Francesca DeMeo have found that Mars can also stir up asteroid surfaces, if in close enough contact. The team calculated the orbits of 60 refreshed asteroids, and found that 10 percent of these never cross Earth’s orbit. Instead, these asteroids only come close to Mars, suggesting that the Red Planet can refresh the surfaces of these asteroids.

“We don’t think Earth is the only major driver anymore, and it opens our minds to the possibility that there are other things happening in the solar system causing these asteroids to be refreshed,” says DeMeo, who did much of the work as a postdoc in MIT’s Department of Earth, Atmospheric and Planetary Sciences.

DeMeo and Binzel, along with former MIT research associate Matthew Lockhart, have published their findings in the journal Icarus.

The idea that Mars may shake up the surface of an asteroid is a surprising one: As Binzel points out, the planet is one-third the size of Earth, and one-tenth as massive — and therefore exerts a far weaker gravitational pull on surrounding objects. But Mars’ position in the solar system places the planet in close proximity with the asteroid belt, increasing the chance of close asteroid encounters.

“Mars is right next to the asteroid belt, and in a way it gets more opportunity than the Earth does to refresh asteroids,” Binzel says. “So that may be a balancing factor.”

DeMeo, who suspected that Mars may have a hand in altering asteroid surfaces, looked through an asteroid database created by the International Astronomical Union’s Minor Planet Center. The database currently consists of observations of 300,000 asteroids and their orbits; 10,000 of these are considered near-Earth asteroids.

Over the past decade, Binzel’s group has tracked the brightest of these asteroids, measuring their colors to determine which may have been refreshed recently. For this most recent paper, the researchers looked at 60 such asteroids, mapping out the orbit of each and determining which orbits had intersected with those of Earth or Mars. DeMeo then calculated the probability, over the last 500,000 years, that an asteroid and either planet would have intersected, creating a close encounter that could potentially generate asteroid quakes.

“Picture Mars and an asteroid going through an intersection, and sometimes they’ll both come through at very nearly the same time,” Binzel says. “If they just barely miss each other, that’s close enough for Mars’ gravity to tug on [the asteroid] and shake it up. It ends up being this random process as to how these things happen, and how often.”

Refreshing the face of an asteroid

From their calculations, the researchers found that 10 percent of their sample of asteroids only cross Mars’ orbit, and not Earth’s. DeMeo explored other potential causes of asteroid refreshing, calculating the probability of asteroids colliding with each other, as well as the possibility for a phenomenon called “spin-up,” in which energy from the sun causes the asteroid to rotate faster and faster, possibly disrupting its surface. From her calculations, DeMeo found no conclusive evidence that either event would significantly refresh asteroids, suggesting that “Mars is the only game in town,” Binzel says.

Although 10 percent of 60 asteroids may not seem like a significant number, DeMeo notes that given Mars’ small size, the fact that the planet may have an effect on one out of 10 asteroids is noteworthy. “Mars is more powerful than we expected,” she says.

Vishnu Reddy, associate research scientist at the Planetary Science Institute in Tucson, Ariz., says the possibility that Mars may weather passing asteroids provides scientists with one of potentially many weathering sources in space.

“On each of the asteroids we have visited so far, every one of them has shown a different kind of space weathering,” says Reddy, who was not involved in the research. “So it appears that not only is composition an important factor, but also the location of the asteroid with respect to the sun.”

The researchers add that now that Mars has been proven to refresh asteroids, other planets, such as Venus, may have similar capabilities — particularly since Venus is closer in mass to Earth.

“You think about these asteroids going around the sun doing their own thing, but there’s really a lot more going on in their histories,” says DeMeo, who is now a postdoc at Harvard University. “This gives you a dynamic idea of the lives of asteroids.”

This work was supported by the National Science Foundation.


Contacts and sources:
By  Jennifer Chu
Massachusetts Institute of Technology
on November 19, 2013