It sounds like the script for a Hollywood film: a giant meteorite from outer space heading straight for the Earth and threatening the destruction of mankind. And yet such a scenario does represent a real threat to our planet, as researchers reckon that we can expect an asteroid to collide with Earth every few hundred years.

In real life, though, nobody wants to rely on a rescue plan hastily improvised at the last minute. That is why the European-funded research project NEOShield was set up, with research scientists from Fraunhofer Institute for High-Speed Dynamics, Ernst-Mach-Institut, EMI in Freiburg among those contributing to the work on the asteroid impact avoidance system. The teams of researchers are working to develop concepts designed to help avert these impacts and to alter asteroids’ orbits as they race toward Earth.

If an asteroid hits, the consequences are clear. The Barringer Crater in Arizona is 1200m wide and was made by an asteroid 50 meters in size. 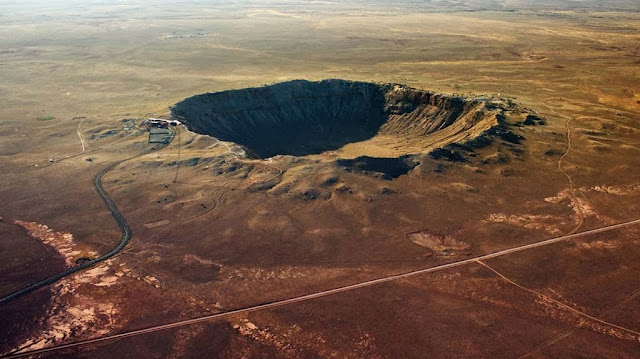 Earth's geological and biological history is punctuated by evidence of repeated and devastating impacts from space. Sixty-five million years ago, an asteroid impact caused the extinction of the dinosaurs along with some 70% of Earth's living species. A more typical recent impact was the 1908 Tunguska Event, a 3-5 megaton explosion which destroyed 2,000 square kilometers of Siberian forest.

A future asteroid collision could have disastrous effects on our interconnected human society. The blast, fires, and atmospheric dust produced could cause the collapse of regional agriculture, leading to widespread famine. Ocean impacts like the Eltanin event (2.5 million years ago) produce tsunamis which devastate continental coastlines. Asteroid 99942 Apophis, which has a 1-in-45,000 chance of striking Earth in 2036, would generate a 500-megaton (MT) blast and inflict enormous damage.

Devastating impacts are clearly infrequent events compared to a human lifetime: Tunguska, thought to be caused by the impact of a 45-meter-wide asteroid, is an event that occurs on average two or three times every thousand years. However, when Near Earth Object (NEO) impacts occur they can cause terrible destruction, dwarfing that caused by more familiar natural disasters.

Our planet orbits the Sun amid a swarm of hundreds of thousands of inner solar system objects capable of causing destruction on Earth. They range in size from 45-meter Tunguska-like objects to the extremely rare 10-kilometer objects which can cause a catastrophic mass extinction.

The Cretaceous-Tertiary (K-T) Extinction, 65 million years ago, was probably triggered by the impact of a 12-kilometer-diameter asteroid in what is now the Yucatan Peninsula of Mexico. The planet-wide effects of Chicxulub eliminated about 70% of all living species, including the dinosaurs.

Tons of cosmic material fall on the Earth every day, but nearly all disintegrates and burns during passage through the atmosphere. However, when objects larger than approximately 45 meters in diameter strike, the atmosphere cannot fully screen us. Even NEOs  which do not make it all the way to the ground can cause destruction through the production of a damaging fireball and shock wave. The most famous example occurred in 1908, when 2,000 square kilometers of Siberian forest were destroyed by a multi-megaton impact called the Tunguska Event.


Advances in observing technology will lead to the detection of over 500,000 NEOs over the next 15 years. Of those several dozen will pose an uncomfortably high risk of striking Earth and inflicting local or regional devastation.

In the case of an asteroid on a collision course for Earth, scientists refer to the point in time and space when the asteroid will impact with the Earth. To prevent the impact, the asteroid has to be speeded up or slowed down so that the Earth has either passed by or is yet to arrive when the asteroid reaches the hypothetical point of collision.

»One solution would be to launch a relatively solid space probe designed to hit the asteroid at high speed,« says Professor Alan Harris from the German Aerospace Center’s Institute of Planetary Research as he explains the basic concept. Professor Harris leads the EU-funded NEOShield project. Meanwhile, scientists from Fraunhofer EMI are helping to research the foundations of this technique. »Asteroids are typically made of porous materials, so the first step is to build up a basic understanding of what happens when materials like that are hit by a foreign object,« says Dr. Frank Schäfer, head of the spacecraft technology group at Fraunhofer EMI. 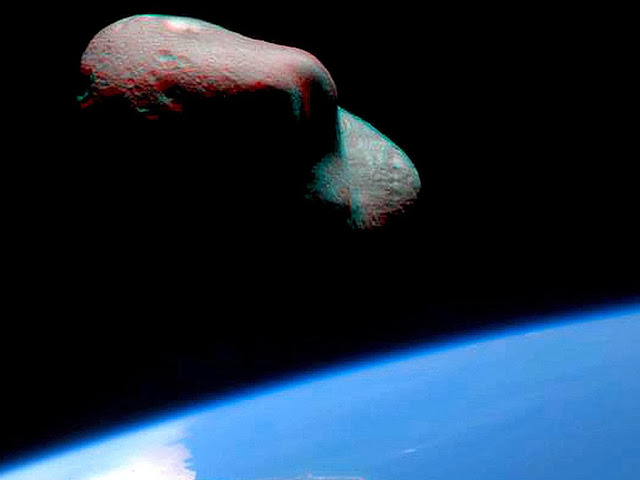 To do this, he and his team use a light gas gun – one of the fastest accelerator facilities in the world. Within the gun’s approximately one-and-a-half-meter barrel, millimeter-sized pellets are accelerated to speeds of almost 10km per second. That equates to a speed of around 36,000 kilometers per hour.

The Fraunhofer scientists use what is known as a target chamber to bombard stone blocks used to approximate asteroids with a high-velocity mini projectile. The aim is to analyze with as much precision as possible how the material reacts. High-speed cameras document the experiment by taking up to 30,000 pictures per second. As in the crash testing of vehicles, the Fraunhofer researchers are interested in quantifying the force of the collision. Data are adjusted to account for actual scale and are imported continuously into computer simulations.

In the long term, NEOShield project leader Professor Harris would like to see the defense techniques that are the subject of this research tested in international space missions: »This kind of test mission is bound to throw up a few surprises, and will teach us a great deal.«

Incidentally, Harris reckons that averting an oncoming asteroid from its collision course by means of a huge explosion – just like in a Hollywood film – could in fact be an option in an emergency. Time would have to be pressing though, or the object concerned at least a kilometer in diameter.

The Need for a Global Response
Faced with such a threat, we are far from helpless. Astronomers today can detect a high proportion of Near Earth Objects and predict potential collisions with the Earth. Evacuation and mitigation plans can be prepared to cope with an unavoidable impact. For the first time in our planet's 4.5-billion-year history, the technical capacities exist to prevent such cosmic collisions with Earth. The keys to a successful outcome in all cases are preparation, planning, and timely decision-making.

NEO 25143 Itokawa (500 m in diameter) imaged by Hayabusa spacecraft (2005).
Efforts to deflect a NEO will temporarily put different populations and regions at risk in the process of eliminating the risk to all. Questions arise regarding the authorization and responsibility to act, liability, and financial implications. These considerations make it inevitable that the international community, through the United Nations and its appropriate organs, will be called upon to make decisions on whether or not to deflect a NEO, and how to direct a proposed deflection campaign. Because of the substantial lead time required for a deflection, decisions will have to be taken before it is certain that an impact will occur. Such decisions may have to be made as much as ten times more often than the occurrence of actual impacts.

Existing space technology makes possible the successful deflection of the vast majority of hazardous NEOs. However, once a threatening object is discovered, maximizing the time to make use of that technology will be equally important. Failure to put in place an adequate and effective decision-making mechanism increases the risk that the international community will temporize in the face of such a threat. Such a delay will reduce the time available for mounting a  deflection campaign. Therefore, timely adoption of a decision-making program is essential to enabling effective action.

Humankind now possesses the technology to provide the first two essential elements necessary to protect the planet from asteroid impacts. Early impact warning is already underway for the largest objects of concern and new telescopes will soon increase the capability to provide impact warning for more numerous smaller objects of concern. Asteroid deflection capability, while not yet proven, is possible with current spaceflight
technology and is being actively investigated by several of the world’s space agencies.

The missing third element is the readiness and determination of the international community to take concerted action in response to a perceived threat to the planet.

An adequate global action program must include deflection criteria and campaign plans which, can be implemented rapidly and with little debate by the international community. In the absence of an agreed-upon decision-making process, we may lose the opportunity to act against a NEO in time, leaving evacuation and disaster management as our only response to a pending impact. A single such missed opportunity will add painful fault-finding to the devastating physical effects of an impact. The international community should begin work now on forging its warning, technology, and decision-making capacities into an effective shield against a future collision

Deflection to save Earth

A successful NEO deflection must modify the orbit of a threatening NEO such that it misses the Earth at the predicted time of impact and that the deflection itself does not result in a subsequent impact within a few years. These two operations are referred to respectively as a primary deflection and a shepherding operation.

In general, the two conditions above require a combination of both substantial total impulse to avoid the direct impact, and precise orbit control to assure that the NEO passes between return keyholes. Primary deflection causes the NEO to miss the Earth whereas shepherding guides the NEO such that it passes between all keyholes as it passes nearby the Earth.

If a threatening NEO passes close by the Earth in the decades prior to a potential impact, it will have to pass through a keyhole during that close encounter in order to subsequently impact Earth. If this scenario is seen to be developing sufficiently in advance of the potential impact, a shepherding mission can be launched to guide the NEO around the keyhole thereby avoiding potential impact. If, however, there is no close encounter with Earth between the discovery of a potential impact and the date of impact, then the NEO is on a direct impact path and a full deflection campaign (e.g., primary deflection plus shepherding) must be mounted to avoid the impact.

Primary deflection and shepherding requirements cannot be met with any single existing deflection technique. Available instantaneous force (IF) concepts (kinetic impact and nuclear explosion) can provide considerable total impulse, thereby meeting the primary deflection needs, but will result in a large uncertainty in the velocity change imparted to the NEO (up to 500% uncertainty).

Continuous force (CF) deflection methods, such as a gravity tractor, can provide only limited total impulse, but that impulse can be provided with high precision resulting in a well-determined (even a pre-determined) final NEO orbit, thereby being ideal for shepherding operations.

However, the requirement for two distinct missions in a deflection campaign is not limited to obtaining the magnitude and precision of the NEO deflection per se. There is also a requirement for a precise NEO orbit determination both before and after the deflection maneuvers. Furthermore, there is a high value in being able to observe and confirm the primary deflection by the shepherding spacecraft from a stand-off/observing location