Researchers at the Ruhr-Universität Bochum (RUB) have developed a bio-based solar cell. They embedded the two proteins photosystem 1 and 2, which in plants are responsible of photosynthesis, into complex molecules developed in-house, thus creating an efficient electron current. Headed by Prof Dr Wolfgang Schuhmann from the Department of Analytical Chemistry and Center for Electrochemical Sciences (CES) and Prof Dr Matthias Rögner from the Department of Plant Biochemistry, the team has published a report in the journal “Angewandte Chemie”.

In leaves, the photosystems 1 and 2 utilise light energy very efficiently; this is required for converting carbon dioxide into oxygen and biomass. The Bochum researchers’ bio-based solar cell, on the other hand, generates electricity rather than biomass. Prof Rögner’s team isolated the two photosystems from thermophilic cyanobacteria that live in a hot spring in Japan. Because of their habitat and behaviour, their photosystems are much more stable than comparable proteins of species that do not occur under extreme environmental conditions. Prof Schuhmann’s team developed complex electron-conducting materials, so-called redox hydrogels. The researchers embedded the photosystems into these hydrogels in order to connect them to the electrodes of the photovoltaic cells. 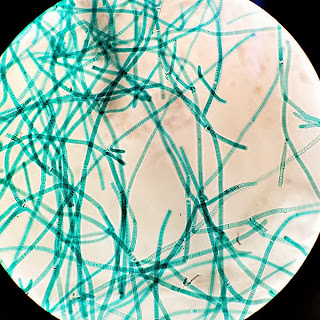 Structure of the bio-based solar cell

Efficiency may be increased

In order to convert solar into electric energy, there must be a potential difference between the two electrodes. The Bochum researchers have established this difference by deploying redox hydrogels with different potentials. The potential difference determines the bio photovoltaic cell’s voltage and, consequently, its efficiency. Currently, the bio-based solar cell boasts an efficiency of several nanowatts per square centimeter. “The system may be considered a blue print for the development of semi-artificial and natural cell systems in which photosynthesis is used for the light-driven production of secondary energy carriers such as hydrogen,” says Prof Rögner.

The project was funded by the German Research Foundation (Deutsche Forschungsgemeinschaft) as part of the Cluster of Excellence RESOLV (EXC 1069) and by the EU as part of the programmes “CyanoFactory” and “COST Action TD1102 Phototech”.