An Unconventional Car: No Engine, No Transmission, No Differential And Excellent Performance

This car has no engine, no transmission and no differential. It weighs half as much as a conventional car. Each of its four wheels has its own built-in electric battery-powered motor, meaning the car has the ability to make sharp turns and change direction very quickly. 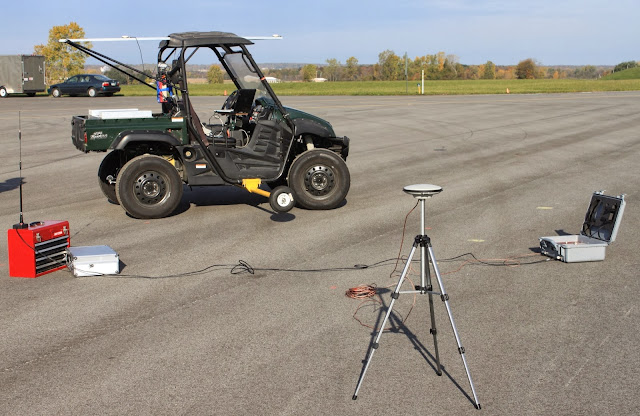 Without an exceptional traction and motion control system, however, this car would be quite difficult to drive, providing a driving experience vastly different from anything else on the road, and almost certainly more dangerous.

This is where Junmin Wang's expertise comes in.

Wang, assistant professor of mechanical engineering at Ohio State University, and his team are designing algorithms for the vehicle's onboard computer that will calculate and ensure motion control to keep the car stable and operating smoothly. The system, which receives and analyzes input data 100 times per second from the steering wheel, the gas pedal and brake, works out how each wheel should respond.

"Without it, the car is quite difficult to drive because the wheels are not coordinated," says the National Science Foundation (NSF)-funded researcher, who also directs the university's vehicle systems and control laboratory. "You feel like you are driving something uncontrollable. You could flip over, or travel along an undesired path, or cause a crash. But when the 'controller' is active, based on feedback loops, the vehicle motion can be controlled, just as the driver expects."

Junmin Wang is an assistant professor of mechanical engineering at Ohio State University and principal investigator of the NSF-CAREER award. 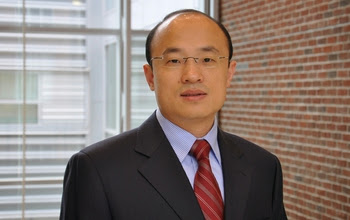 With a safe and reliable control system, this new electric vehicle ultimately should make the perfect in-city car. It's efficient and maneuverable--and has no emissions. Because it is all electric, "you can use wind power or solar power, and contribute toward reducing our dependency on fossil oils," Wang says.

The computer calculates exactly how much torque the car needs for each of its four wheels. Moreover, because each wheel is independent, "one wheel can be doing the braking, while another is doing the driving," Wang says. "The computer gets signals from the driver from the steering wheel and pedal positions, then calculates the desired speed, or vehicle motion, based on a mathematical model."

Wang's work on the car began in 2009 with a grant from the Office of Naval Research Young Investigator Program. In February 2012 he received an NSF Faculty Early Career Development (CAREER) award, which supports junior faculty who exemplify the role of teacher-scholars through outstanding research, excellent education, and the integration of education and research within the context of the mission of their organization. He is receiving $400,000 over five years.

As part of the grant's educational component, Wang's lab hosted a summer program for high school students where, among other things, the teenagers disassembled and reassembled radio-controlled toy electric cars to increase their understanding of their mechanics.

Additionally, students from the Columbus Metro School, a public STEM (science, technology, engineering, math) high school open to students from around the state, participated in research internships on the experimental car in Wang's lab.

The experimental car weighs only about 800 kg., or a little more than 1,750 pounds, which makes it energy efficient. The researchers retrofitted a commercially available utility terrain vehicle chassis and removed the engine, transmission and differential, then added a 7.5 kW electric motor to each wheel and a 15 kW lithium-ion battery pack. A single electrical cable connects the motors to a central computer. This type of car design, where each wheel has its own individual motor, is known as "four wheel independently actuated."

The researchers tested the car and its controller on normal road conditions at the Transportation Research Center in East Liberty, Ohio, an independent automotive site for vehicle crash, emissions and durability testing. On roads with good conditions, the car followed a driver's "desired" path within four inches.

To see how it performs on slippery roads, they brought the car to an empty west campus parking lot on a snowy day. The car maneuvered with an accuracy of up to eight inches, and the vehicle traction and motion control system prevented "fishtailing" through independent control of the left and right sides of the car.

The researchers, including doctoral student Rongrong Wang, described the car's ability to follow a specific trajectory in a paper published in January 2013 in the journal Control Engineering Practice.

Wang can't yet estimate the mileage for a single charge, since the car only has been driven during experimental testing. But he says the car provides "about 8 to 10 hours of driving on a single charge, although not continuously."

Wang thinks it will take another five- to- 10 years before the car is ready for commercial use. The researchers still must fine-tune the computer algorithms and add more safety features. Wang says it is difficult to compare their test results to a conventional car, since the latter's maneuverability is limited by the transmission and differential systems that link the wheels together mechanically.

Nevertheless, he predicts that, ultimately, the research will produce an electric car that will be clean, fuel-efficient and "handle better than typical conventional cars," he says.