A Fiery Drama Of Star Birth And Death

Located only about 160 000 light-years from us  in the constellation of Dorado (The Swordfish), the Large Magellanic Cloud is one of our closest galactic neighbors. It is actively forming new stars in regions that are so bright that some can even be seen from Earth with the naked eye, such as the Tarantula Nebula. This new image, taken by ESO's Very Large Telescope at the Paranal Observatory in Chile, explores an area called NGC 2035 (right), sometimes nicknamed the Dragon's Head Nebula.

The Large Magellanic Cloud is one of the closest galaxies to our own. Astronomers have now used the power of the ESO's Very Large Telescope to explore NGC 2035, one of its lesser known regions, in great detail. This new image shows clouds of gas and dust where hot new stars are being born and are sculpting their surroundings into odd shapes. But the image also shows the effects of stellar death -- filaments created by a supernova explosion (left).

NGC 2035 is an HII region, or emission nebula, consisting of clouds of gas that glow due to the energetic radiation given off by young stars. This radiation strips electrons from atoms within the gas, which eventually recombine with other atoms and release light. Mixed in with the gas are dark clumps of dust that absorb rather than emit light, creating weaving lanes and dark shapes across the nebula.

This zoom sequence starts with a broad view of the whole sky. We gradually close in on the Large Magellanic Cloud, a small neighbouring galaxy to our Milky Way. The final close-up shows a VLT image of NGC 2035, a star formation region that has an adjacent remnant created by a supernova explosion.

The filamentary shapes to the left in the image are the not the results of starbirth, but rather stellar death. It was created by one of the most violent events that can happen in the Universe — a supernova explosion [1]. These explosions are so bright that they often briefly outshine their entire host galaxy, before fading from view over several weeks or months (also see eso1315 - http://www.eso.org/public/news/eso1315/ and potw1323a -http://www.eso.org/public/images/potw1323a/).

This wide-field view captures several star formations regions in the constellation of Dorado (The Swordfish). These glowing clouds of gas are located in the Large Magellanic Cloud, one of the Milky Way’s satellite galaxies. The bright region a little to the left of centre is NGC 2035. This view was created from images forming part of the Digitized Sky Survey 2. 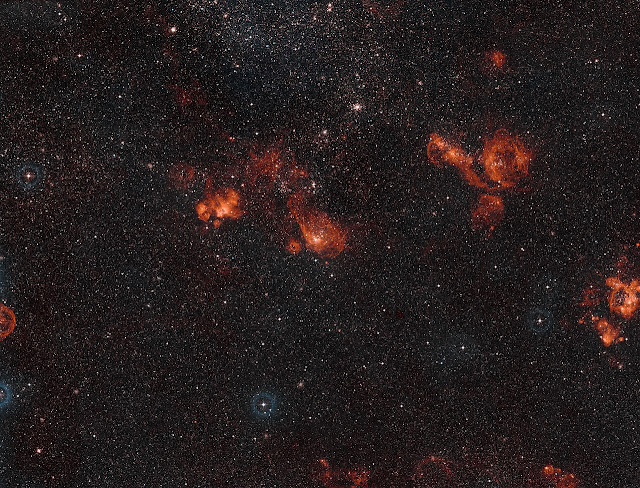 From looking at this image, it may be difficult to grasp the sheer size of these clouds — they are several hundred light-years across. And they are not in our galaxy, but far beyond. The Large Magellanic Cloud is enormous, but when compared to our own galaxy it is very modest in extent, spanning just 14 000 light-years — about ten times smaller than the Milky Way.

This image was acquired using the FOcal Reducer and low dispersion Spectrograph instrument attached to ESO's Very Large Telescope, which is located at the Paranal Observatory in Chile, as part of the ESO Cosmic Gems programme [2].

This chart shows the southern constellation of Dorado (The Swordfish, sometimes referred to as a Dolphinfish). Most of the stars that can be seen in a dark sky with the unaided eye are marked. The location of the star formation region NGC 2035 in the Large Magellanic Cloud is indicated with a red circle. The nebula itself appears as a faint fuzzy patch in amateur telescopes, although the bright stars associated with this region can be very easily seen. 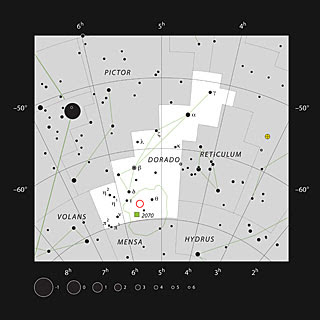 [1] The remnant left over by the supernova explosion that can be seen in this image is called SNR 0536-67.6.

[2] The ESO Cosmic Gems programme is an initiative to produce images of interesting, intriguing or visually attractive objects using ESO telescopes, for the purposes of education and public outreach. The programme makes use of telescope time that cannot be used for science observations. All data collected may also be suitable for scientific purposes, and are made available to astronomers through ESO's science archive.