The largest survey ever of the world’s foremost sea-level rise experts shows that a meter of warming is possible by 2100 with unchecked emissions. Quaternary Science Reviews published the study over the weekend.

Because projecting sea-level rise comes with many uncertainties (glacier and ice cap melting, use of water for irrigation and more), different modeling approaches yield significantly different answers. By surveying leaders in the field, study authors offered more assurance on the ranges of future sea-level rise.

Comparison of two sea level reconstructions during the last 500 Ma. The scale of change during the last glacial/interglacial transition is indicated with a black bar. Note that over most of geologic history, long-term average sea level has been significantly higher than today. 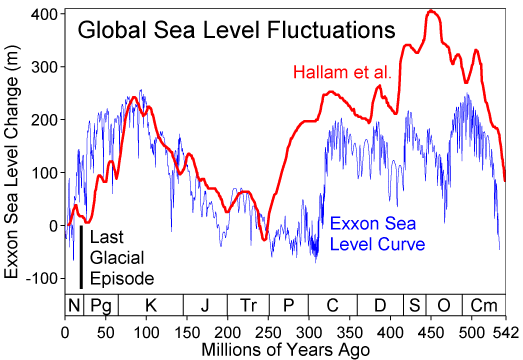 The potential damage from sea level rise is significant. An additional meter of rise poses significant risks to U.S. coastal regions, which are inhabited by 29% of the national population, including five of the ten largest cities and generate 45% of the nation’s Gross Domestic Product.

In each scenario, the experts surveyed predicted more sea level rise than the Intergovernmental Panel on Climate Change’s (IPCC) Working Group I report, which was released in September. This finding is in line with the IPCC’s reputation as being conservative in its estimates.

The survey also asked for a “high-end” estimate below which respondents expect sea level to stay with 95 percent certainty until the year 2100 (the IPCC does not include this data point, although the high-end value is relevant for coastal planning). For unmitigated emissions, half of the experts (51%) gave at least 1.5m, and a quarter (27%) reported 2 or more meters. A majority of experts (58%) reported the high-end value for 2300 as 4m or higher.

“The results show that unmitigated emissions could have catastrophic impact on many coastal cities and low-lying areas,” said lead author Dr. Benjamin Horton, professor at the Institute of Marine and Coastal Sciences at Rutgers University. “But they also illustrate the potential for allaying such large sea-level rise through successful reduction of emissions.”