Scientists have moved closer to developing a universal flu vaccine after using the 2009 pandemic as a natural experiment to study why some people seem to resist severe illness.

Researchers at Imperial College London asked volunteers to donate blood samples just as the swine flu pandemic was getting underway and report any symptoms they experienced over the next two flu seasons. 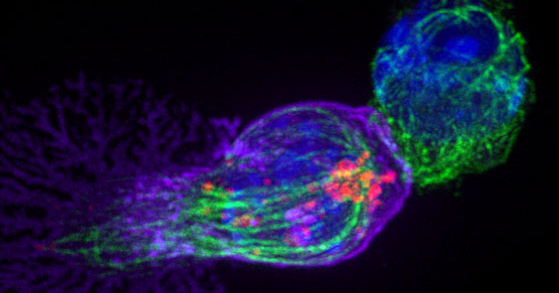 They found that those who avoided severe illness had more CD8 T cells, a type of virus-killing immune cell, in their blood at the start of the pandemic.

They believe a vaccine that stimulates the body to produce more of these cells could be effective at preventing flu viruses, including new strains that cross into humans from birds and pigs, from causing serious disease.

The findings are published in Nature Medicine.

Professor Ajit Lalvani from the National Heart and Lung Institute at Imperial College London, who led the study, said: "New strains of flu are continuously emerging, some of which are deadly, and so the Holy Grail is to create a universal vaccine that would be effective against all strains of flu."

Today's flu vaccines make the immune system produce antibodies that recognise structures on the surface of the virus to prevent infection with the most prevalent circulating strains. But they are usually one step behind as they have to be changed each year as new viruses with different surface structures evolve.

Previously, experimental models had suggested that T cells may protect against flu symptoms but until now this idea has not been tested in humans during a pandemic.

Professor Lalvani's team rapidly recruited 342 staff and students at Imperial to take part in their study in autumn 2009. The volunteers donated blood samples and were given nasal swabs. They were sent emails every three weeks asking them to fill in a survey about their health. If they experienced flu symptoms, they took a nasal swab and sent it back to the lab.

They found that those who fell more severely ill with flu had fewer CD8 T cells in their blood, and those who caught flu but had no symptoms or only mild symptoms had more of these cells.

Professor Lalvani said, "The immune system produces these CD8 T cells in response to usual seasonal flu. Unlike antibodies, they target the core of the virus, which doesn't change, even in new pandemic strains. The 2009 pandemic provided a unique natural experiment to test whether T cells could recognise, and protect us against, new strains that we haven't encountered before and to which we lack antibodies.

"Our findings suggest that by making the body produce more of this specific type of CD8 T cell, you can protect people against symptomatic illness. This provides the blueprint for developing a universal flu vaccine.

"We already know how to stimulate the immune system to make CD8 T cells by vaccination. Now that we know these T cells may protect, we can design a vaccine to prevent people getting symptoms and transmitting infection to others. This could curb seasonal flu annually and protect people against future pandemics."