Researchers Envision Switching A Heart Beat On And Off With Light

With a few flicks of a light switch--on-off-on-off--Stanford University's Oscar Abilez is one step closer to changing the lives of millions.


A team of Stanford University scientists are currently working to develop a novel biological pacemaker that uses stem cells and optogenetics to control the human heart with light. 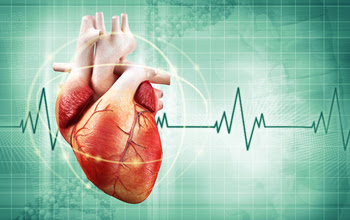 Why? Because as a focused speck of light turns on and off in Abilez's lab, a cluster of heart cells begins to expand and contract. He demonstrates that he can control the rhythm of a heart using just light.

Currently, 4 million Americans suffer from some degree of cardiac arrhythmia, wherein a person's heart beats too slowly, too quickly or at irregular intervals. Such heart rhythm problems can cause a shortness of breath, fainting and, in worst-case scenarios, death.

The good news is devices like pacemakers and defibrillators allow doctors to introduce electrical signals to set patients' hearts at regularly timed beats. But these small mechanical devices come with risks.

"It's like using a cannon to kill an ant," says Leon Esterowitz, director of the National Science Foundation's (NSF) Directorate for Engineering's Biophotonics program, which funds this research through the Living Matter Lab at Stanford, under the direction of Ellen Kuhl, a professor of engineering at Stanford.

Patients must undergo invasive surgical procedures to permanently implant the devices, which can cause cardiac tissue damage. There are other challenges too, such as lifestyle limitations and the occasional battery malfunction.

Doctors and patients agree there must be a better solution.

"I think progress has to happen," says Ryan Aleong, a leading University of Colorado Denver cardiologist who diagnoses and treats the heart's electrical irregularities. "I think we all realize there's going to be a move for more translational medicine to solve some of these problems."

Dr. Light to the rescue

That's where Abilez, a cardiovascular physician with a doctorate in bioengineering, comes in. He's working with a team of Stanford scientists to develop a novel biological pacemaker--one that controls the human heart with light.

The project, Optogenetic Control of the Human Heart--Turning Light into Force, received $600,000 from NSF last year. The Biomechanics and Mechanobiology program and the Mechanics of Materials program in NSF's Engineering Directorate co-fund the research along the Biophotonics program.

It was one of 40 new projects funded during the first round of NSF's INSPIRE initiative, which addresses complicated and pressing scientific problems that do not fit neatly into any one traditional scientific field or domain.

At first glance optogenetics seems more like a magic trick than science, using just flashes of light to control a targeted group of cells.

But, not so fast. Optogenetics uses techniques from both optics and genetics to control the activity of individual neurons in living tissue.

Only a few organisms, such as algae, have naturally light-sensitive cells. In 2002, however, scientists in Germany were able to isolate the genes for the proteins--called opsins--responsible for cells' light sensitivity and modify the genetic code of other cells so that they, too, would produce opsins.

Once produced, the opsins act like small hatches on the surface of a cell. When light shines on them, the hatches either open or close, depending on the type of opsin they are. If the hatches open, electrical signals are able to flow through the cell and be translated into some action, such as regulating a heart. In 2005, Karl Deisseroth and colleagues, also at Stanford, were able to genetically introduce opsins into neurons and control these cells with light; this work and subsequent work has led to the field of optogenetics.

Optogenetics has huge implications for medicine. Researchers, for example, already have shown that they can stop a seizure, cure anxiety and even implant fake memories into the minds of mice using the technology.

Shining a light on someone's chest

Abilez's grand vision is to take stem cells from a person suffering from cardiac arrhythmia and convert the cells into light-sensitive cardiomyocytes--cells that constitute cardiac muscle and are responsible for pacemaker functions in the heart. The cardiomyocytes would then be grafted onto a person's heart, thus allowing doctors to control the whole heart's rhythm using light.

Current high-energy defibrillation is painful, traumatic and has been associated with a higher rate of mortality, she says. Trayanova also works on cardiac optogenetics.

"Wouldn't it be nice to be able to shine a light on someone's chest and defibrillate them painlessly?"

Abilez has already successfully grown light-sensitive cardiomyocytes. His next step is to test whether the lab-grown cells are accepted when coupled with a larger body of non-stem-cell derived heart cells.

If they are, then Abilez will be on his way to creating a less-invasive, longer-lasting and glitch-free treatment for arrhythmias.

Moreover, Abilez also will have paved the way for optogenetic success in other fields. If he can successfully couple light-sensitive cells with normal cells, then his method of creating light-sensitive stem cells could be used by other researchers to grow any type of light-sensitive cell they wanted, from neurons to pancreatic cells, magnifying the applications of optogenetics in an unprecedented way.

At a time when many medical treatments, from prescription drugs to surgeries, can result in a laundry list of complications, it may be difficult to trust that cardiac optogenetics offers a relatively complication-free treatment for patients.

In a way, the mistrust is valid, say researchers. There still are risks involved in cardiac optogenetics. Such risks, however, exist not with the treatment itself but with the feasibility of its development. That is to say, there are still major hurdles to overcome before any applications can be realized.

Ronald Berger, professor of medicine at John Hopkins University, is concerned that biological pacemakers might not be able to coordinate electrical activity between the atria and the ventricles.

Abilez acknowledges such risk, saying that there is a chance the team will discover that their light-sensitive stem cells cannot control the heart as well as they hoped. A large part of the research's difficulty is that the team is in uncharted waters--they have no prior research on which to base their efforts.

"We have to invent things along the way. We don't have any precedent," Abilez says.

Ellen Kuhl, director of Stanford's Living Matter Lab is helping to take out some of the uncertainty by creating computer models that simulate the heart under different conditions.

With her models, Kuhl has been able to predict optimal configurations for the gene expression of opsins, how much light needs to be shined on the cardiomyocytes and where in the heart cells should be implanted. She can predict all of this for hearts of varied sizes and ages.

"Computational models can help interpret observations in the complex cardiac setting and can guide future developments," says Emilia Entcheva, a biomechanical engineering professor at Stony Brook University in New York and a colleague of Trayanova.

More immediately, however, Kuhl says, "We can make physical or experimental models of arrhythmia and use those as a platform to test drugs to see which drugs are effective in stopping arrhythmias." In fact, companies are looking into using the technology for such drug testing purposes now.

The computational models used for cardiac optogenetics are a product of a new way of practicing medicine--one that involves not only biology and chemistry, but also engineering, mathematics and computer science.

While the applications of cardiac optogenetics are far-reaching, the field has been slow to develop. This is in part because interest in the technology started just as the scientific community began to feel the effects of the recession, says Entcheva.

"NSF support will be a great incentive for more cardiac researchers to focus on fundamental questions that can elevate the use of optogenetics in electrophysiology and cell signaling," she says.

The researchers estimate the main applications of cardiac optogenetics will be realized in the next 10-15 years.