Paleoclimate simulations reveal potential 'green corridors' across North Africa.  The role of the Sahara as a geographical filter and launch zone for dispersals of Homo sapiens out Africa is a controversial topic.

Three ancient river systems, now buried, may have created viable routes for human migration across the Sahara to the Mediterranean region about 100,000 years ago, according to research published September 11 in the open access journal PLOS ONE by Tom Coulthard from the University of Hull, UK, and colleagues from other institutions.

Researchers used a novel palaeohydrological and hydraulic modelling approach to test the hypothesis that under wetter climates c.100,000 years ago major river systems ran north across the Sahara to the Mediterranean, creating viable migration routes.  They confirm that three of these now buried palaeo river systems could have been active at the key time of human migration across the Sahara.

Unexpectedly, it is the most western of these three rivers, the Irharhar river, that represents the most likely route for human migration. The Irharhar river flows directly south to north, uniquely linking the mountain areas experiencing monsoon climates at these times to temperate Mediterranean environments where food and resources would have been abundant. The findings have major implications for our understanding of how humans migrated north through Africa, for the first time providing a quantitative perspective on the probabilities that these routes were viable for human habitation at these times.
Simulated probability of surface water during the last interglacial. This figure details Archaeological sites, and an annual probability that a location has surface water. The archaeological data are derived from a number of sources (including. The findspots are characterized by Aterian and Middle Stone Age artefacts such as bifacial foliates and stemmed Aterian points and/or typical ‘Mousterian’ points, side scrapers and Levallois technology. Most are represented by surface scatters but where stratified examples exist these can be shown by dating (OSL and U-series techniques) and geomorphological setting to belong within MIS 5e 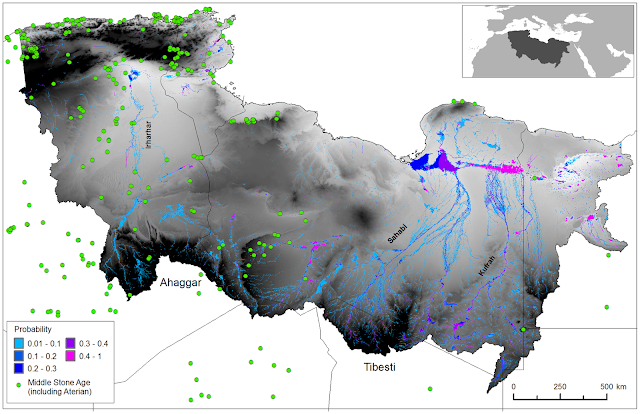 Simulating paleoclimates in the region, the researchers found quantitative evidence of three major river systems that likely existed in North Africa 130,000-100,000 years ago, but are now largely buried by dune systems in the desert. When flowing, these rivers likely provided fertile habitats for animals and vegetation, creating 'green corridors' across the region.

At least one river system is estimated to have been 100 km wide and largely perennial. The Irharhar river, westernmost of the three identified, may represent a likely route of human migration across the region. In addition to rivers, the researchers' simulations predict massive lagoons and wetlands in northeast Libya, some of which span over 70,000-square kilometers.
Yearly average rainfall from a 25 year snapshot of an ESM experiment and catchment area (hatched region) as well as the time series of zonally averaged precipitation for two stripes south of the catchment highlighting the (i) South-North gradient of rainfall during the wet seasons (June to September) and (ii) the modelled year to year variability of the monsoon system. The data is drawn from 12 hourly precipitation data produced during a time-slice experiment  of the last Interglacial (MIS 5e, ~124 ka BP) performed by the fully coupled atmosphere-ocean- sea ice-biosphere general circulation model of the Max-Planck-Institute for Meteorology. The ESM consists of the spectral atmosphere model ECHAM5   including the land surface model JSBACH and a dynamic vegetation module   coupled to the general circulation ocean model MPIOM. The model runs for the atmosphere at a truncation T31, which corresponds to a horizontal resolution of ~300 km in the area under investigation 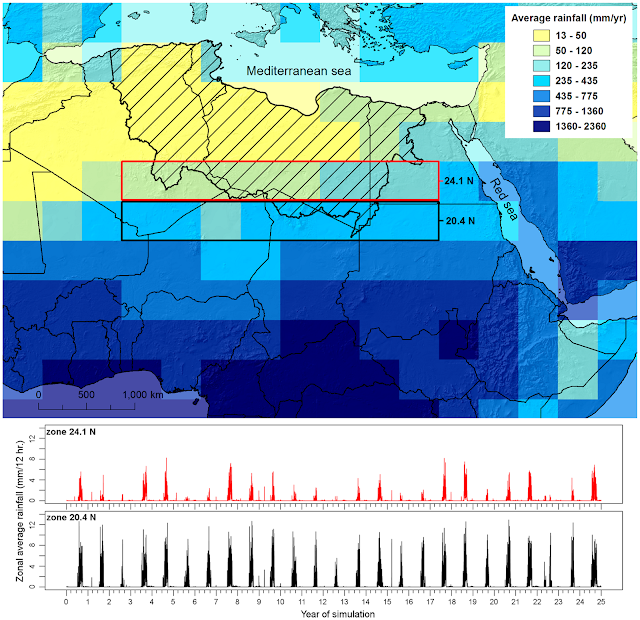 "It's exciting to think that 100 000 years ago there were three huge rivers forcing their way across a 1000km of the Sahara desert to the Mediterranean -- and that our ancestors could have walked alongside them" said Coulthard.

Previous studies have shown that people traveled across the Saharan mountains toward more fertile Mediterranean regions, but when, where and how they did so is a subject of debate. Existing evidence supports the possibilities of a single trans-Saharan migration, many migrations along one route, or multiple migrations along several different routes. The existence of 'green corridors' that provided water and food resources were likely critical to these events, but their location and the amount of water they carried is not known. The simulations provided in this study aim to quantify the probability that these routes may have been viable for human migration across the region.

For the first time, the simulations demonstrate that Saharan “Humid Corridors” were highly likely during the last interglacial strongly re-affirming the viability of these routes as migratory corridors for early hominids. This research provides an unprecedented means of developing new hypotheses for past human, faunal and floral activity in this region and for validating the performance of palaeo climate simulations, according to the researchers.
Contacts and sources:
Kallie Huss
Public Library of Science