New research led by a University of Calgary geophysicist provides strong evidence against continent formation above a hot mantle plume, similar to an environment that presently exists beneath the Hawaiian Islands.

The analysis, published this month in Nature Geoscience, indicates that the nuclei of Earth's continents formed as a byproduct of mountain-building processes, by stacking up slabs of relatively cold oceanic crust. This process created thick, strong 'keels' in the Earth's mantle that supported the overlying crust and enabled continents to form. 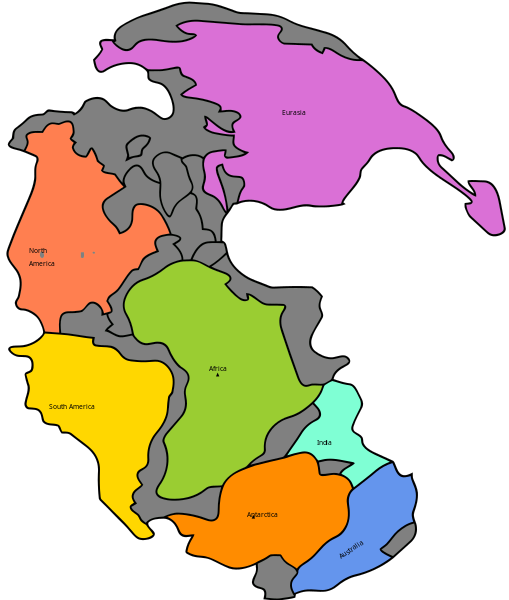 This computer simulation spanning 2.5 billion years of Earth history is showing density difference of the mantle, compared to an oceanic reference, starting from a cooler initial state. Density is controlled by mantle composition as well as slowly cooling temperature; a keel of low-density material extending to about 260 km depth on the left side (x < 600 km) provides buoyancy that prevents continents from being subducted ('recycled' into the deep Earth). Graph on the top shows a computed elevation model.

The scientific clues leading to this conclusion derived from computer simulations of the slow cooling process of continents, combined with analysis of the distribution of diamonds in the deep Earth.

The Department of Geoscience's Professor David Eaton developed computer software to enable numerical simulation of the slow diffusive cooling of Earth's mantle over a time span of billions of years.

Working in collaboration with former graduate student, Assistant Professor Claire Perry from the Universite du Quebec a Montreal, Eaton relied on the geological record of diamonds found in Africa to validate his innovative computer simulations.

"For the first time, we are able to quantify the thermal evolution of a realistic 3D Earth model spanning billions of years from the time continents were formed," states Perry.

Mantle plumes consist of an upwelling of hot material within Earth's mantle. Plumes are thought to be the cause of some volcanic centres, especially those that form a linear volcanic chain like Hawaii. Diamonds, which are generally limited to the deepest and oldest parts of the continental mantle, provide a wealth of information on how the host mantle region may have formed.

"Ancient mantle keels are relatively strong, cold and sometimes diamond-bearing material. They are known to extend to depths of 200 kilometres or more beneath the ancient core regions of continents," explains Professor David Eaton. "These mantle keels resisted tectonic recycling into the deep mantle, allowing the preservation of continents over geological time and providing suitable environments for the development of the terrestrial biosphere."

His method takes into account important factors such as dwindling contribution of natural radioactivity to the heat budget, and allows for the calculation of other properties that strongly influence mantle evolution, such as bulk density and rheology (mechanical strength).

"Our computer model emerged from a multi-disciplinary approach combining classical physics, mathematics and computer science," explains Eaton. "By combining those disciplines, we were able to tackle a fundamental geoscientific problem, which may open new doors for future research."

This work provides significant new scientific insights into the formation and evolution of continents on Earth.


The research paper is available online at: http://www.nature.com/ngeo/journal/vaop/ncurrent/abs/ngeo1950.html

Contacts and sources:
Marie-Helene Thibeault
University of Calgary
on September 23, 2013