The densest galaxy in the nearby part of the Universe may have been found. Packed with an extraordinary number of stars, this unusual galaxy is providing astronomers with clues to its intriguing past and how it fits into the galactic evolutionary chain.


Imagine the distance between the sun and the star nearest to it – a star called Alpha Centauri. That’s a distance of about 4 light years. Now, imagine as many as 10,000 of our suns crammed into that relatively small space.

That is about the density of a galaxy that was recently discovered by an international team of astronomers led by a Michigan State University faculty member.


The galaxy, known as M60-UCD1, is a type of “ultra-compact dwarf galaxy”. It was discovered with NASA’s Hubble Space Telescope and follow-up observations were done with NASA’s Chandra X-ray Observatory and ground-based optical telescopes. 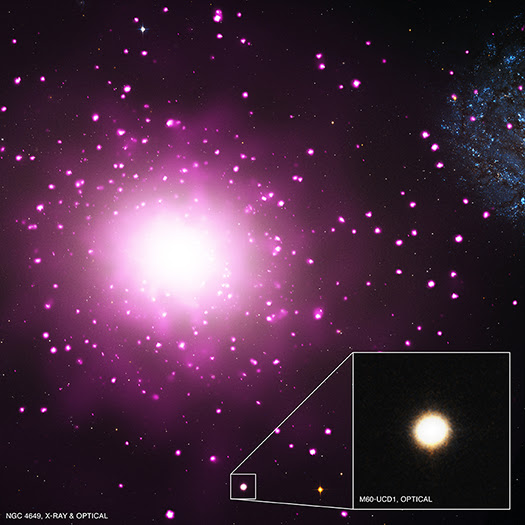 Observations from the W. M. Keck Observatory on the summit of Mauna Kea, Hawaii, characterized it as the most luminous known galaxy of its type and one of the most massive, weighing 200 million times more than our Sun.

What makes M60-UCD1 so remarkable is that about half of this mass is found within a radius of only about 80 light years. This would make the density of stars about 15,000 times greater than found in Earth’s neighborhood in the Milky Way, meaning that the stars are about 25 times closer.

"Traveling from one star to another would be a lot easier in M60-UCD1 than it is in our galaxy," said Jay Strader of Michigan State University in Lansing, first author of a new paper describing these results. "But it would still take hundreds of years using present technology."

The 6.5-meter Multiple Mirror Telescope in Arizona was used to study the amount of elements heavier than hydrogen and helium in stars in M60-UCD1. The values were found to be similar to our Sun.

"The abundance of heavy elements in this galaxy makes it a fertile environment for planets and, potentially, life to form," said co-author Anil Seth of the University of Utah.

Another intriguing aspect of M60-UCD1 is that the Chandra data reveal the presence of a bright X-ray source in its center. One explanation for this source is a giant black hole weighing in at some 10 million times the mass of the Sun.

Astronomers are trying to determine if M60-UCD1 and other ultra-compact dwarf galaxies are either born as jam-packed star clusters or if they are galaxies that get smaller because they have stars ripped away from them. Large black holes are not found in star clusters, so if the X-ray source is in fact due to a massive black hole, it was likely produced by collisions between the galaxy and one or more nearby galaxies. The mass of the galaxy and the Sun-like abundances of elements also favor the idea that the galaxy is the remnant of a much larger galaxy.

"We think nearly all of the stars have been pulled away from the exterior of what once was a much bigger galaxy," said co-author Duncan Forbes of Swinburne University in Australia. "This leaves behind just the very dense nucleus of the former galaxy, and an overly massive black hole."

If this stripping did occur, then the galaxy was originally 50 to 200 times more massive than it is now, which would make the mass of its black hole relative to the original mass of the galaxy more like the Milky Way and many other galaxies. It is possible that this stripping took place long ago and that M60-UCD1 has been stalled at its current size for several billion years. The researchers estimate that M60-UCD1 is more than about 10 billion years old.

The density of stars in the galaxy is so high astronomers do not expect to find a signature of dark matter in the motion of stars. However, these galaxies are considered likely to contain some dark matter. If they do, they are important for making comparisons with computer simulations of the formation of galaxies, which typically predict a larger number of clumps of dark matter than observed.

“This galaxy is more massive than any ultra-compact drawfs of comparable size,” said Jay Strader, MSU assistant professor of physics and astronomy, “and is arguably the densest galaxy known in the local universe.”

As detailed in the recent edition of the publication Astrophysical Journal Letters, the ultra-compact dwarf galaxy was found in what’s known as the Virgo cluster of galaxies, a collection of galaxies located about 54 million light years from our own Milky Way.

What makes this galaxy, dubbed M60-UCD1, so remarkable is that about half of its mass is found within a radius of only about 80 light years. This would make the density of stars about 15,000 times greater than found in Earth’s neighborhood in the Milky Way.

“Traveling from one star to another would be a lot easier in M60-UCD1 than it is in our galaxy,” Strader said. “Since the stars are so much closer in this galaxy, it would take just a fraction of the time.”

The discovery of ultra-compact galaxies is relatively new – only within the past 10 years or so. Until then, astronomers could see these “things” way off in the distance but assumed they were either single stars or very-distant galaxies.

Another intriguing aspect of this galaxy is the presence of a bright X-ray source in its center. One explanation for this is a giant black hole weighing in at some 10 million times the mass of our sun.

Astronomers are trying to determine if M60-UCD1 and other ultra-compact dwarf galaxies are either born as really jam-packed star clusters or if they are galaxies that get smaller because they have stars ripped away from them. The possible massive black hole, combined with the high galaxy mass and sun-like levels of elements found in the stars, favor the latter idea.

A giant black hole at the center of M60-UCD1 helps tip the scales against the scenario where this galaxy was once a star cluster, since such large black holes are not found in these types of objects.

“Twenty years ago we couldn’t have done this,” Strader said. “We didn’t have Hubble or Chandra. This is one of those projects where you bring together the full force of NASA’s great observatories, plus ground-based resources.”


M60-UCD1 is located near a massive elliptical galaxy NGC 4649, also called M60, about 60 million light years from Earth. These results appear online and have been published in the September 20th issue of The Astrophysical Journal Letters. 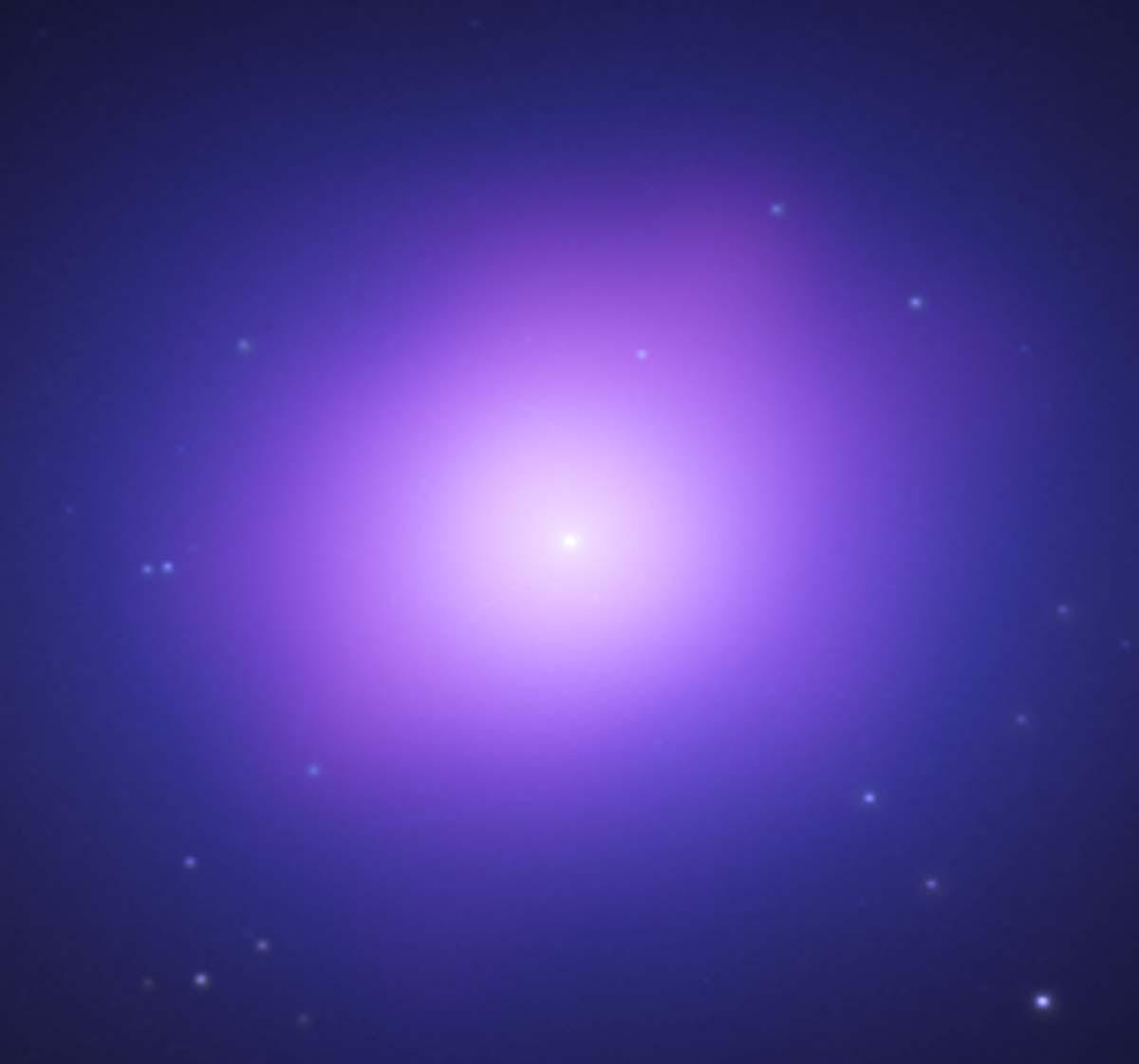