Comet ISON (C/2012 S1) may become a dazzling sight as it traverses the inner solar system in late 2013. During the weeks before its Nov. 28 close approach to the sun, the comet will be observable with small telescopes, and binoculars. Observatories around the world and in space will track the comet during its scorching trek around the sun. If ISON survives its searing solar passage, which seems likely but is not certain, the comet may be visible to the unaided eye in the pre-dawn sky during December.
This animation shows two views of comet ISON's path through the inner solar system. The first is a view following the comet along its orbit. The second is a view perpendicular to ISON's orbit.
Like all comets, ISON is a clump of frozen gases mixed with dust. Often described as "dirty snowballs," comets emit gas and dust whenever they venture near enough to the sun that the icy material transforms from a solid to gas, a process called sublimation. Jets powered by sublimating ice also release dust, which reflects sunlight and brightens the comet.


On Oct. 1, ISON passes within about 6.5 million miles (10.5 million km) of Mars. As it goes by, it may be visible to some of NASA's Mars rovers and satellites, including the Mars Reconnaissance Orbiter and Curiosity. 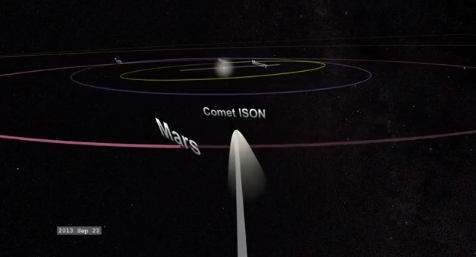 Then, on Nov. 28, ISON will make a sweltering passage around the sun. The comet will approach within about 730,000 miles (1.2 million km) of its visible surface, which classifies ISON as a sungrazing comet. In late November, its icy material will furiously sublimate and release torrents of dust as the surface erodes under the sun's fierce heat, all as sun-monitoring satellites look on. Around this time, the comet may become bright enough to glimpse just by holding up a hand to block the sun's glare.

Sungrazing comets often shed large fragments or even completely disrupt following close encounters with the sun, but for ISON neither fate is a forgone conclusion. Whatever happens, scientists will be able to learn more about comets by how it interacts with the sun's tenuous atmosphere, the corona.

Following ISON's solar swingby, the comet will depart the sun and move toward Earth, appearing in morning twilight through December. The comet will swing past Earth on Dec. 26, approaching within 39.9 million miles (64.2 million km) or about 167 times farther than the moon.
on September 24, 2013