Unlike humans, galaxies don't have an obesity problem. In fact there are far fewer galaxies at the most massive end of the galactic scale than expected and scientists have long sought to explain why. A new, UMD-led study published in the journal Nature suggests that one answer liesWWh in a kind of feast and fast sequence through which large galaxies can keep their mass down.

Galaxies become more massive by 'consuming' vast clouds of gas and turning them into new stars. The new study shows in unprecedented detail how a burst of star formation in a galaxy can blow most of the remaining star-building gas out to the edge of the galaxy, resulting in a long period of starvation during which few new stars are produced. 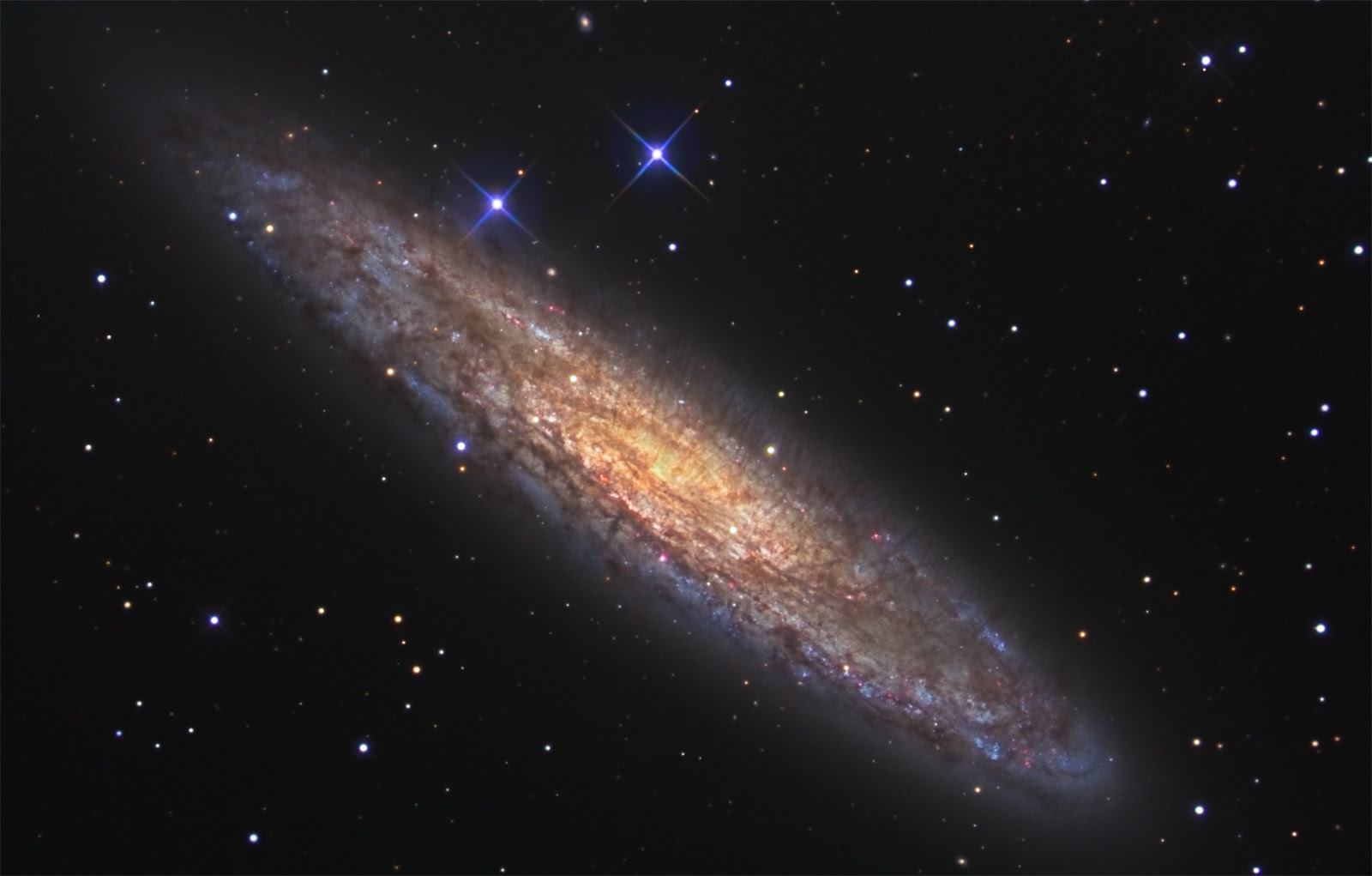 "For the first time, we can clearly see massive concentrations of cold molecular gas being jettisoned by expanding shells of intense pressure created by young stars," says lead author Alberto Bolatto of the University of Maryland. "The amount of gas we measure gives us very convincing evidence that some growing galaxies blow out more gas than they take in, slowing star formation down to a crawl."

The team of astronomers used the new Atacama Large Millimeter/submillimeter Array (ALMA), a giant radio telescope in the high desert of northern Chile, to discover billowing columns of cold, dense gas being pushed out of starburst galaxy NGC 253, also known as the Silver Dollar or Sculptor Galaxy. In starburst galaxies, stars form about 100 times faster than in more normal galaxies like our Milky Way.

NGC 253 – with its slightly askew orientation – offers astronomers an excellent view of the star formation clusters near the galaxy's center, clusters that turn out to be the point of departure for material being pushed from the galaxy.

"ALMA is opening a new window for observations of galactic winds," says Sylvain Veilleux, also at the University of Maryland and a coauthor on the paper. "Winds have the potential to be incredibly disruptive and carry away a significant fraction of the star-forming material of a galaxy."

The team says their results may help explain the universe's surprising paucity of high-mass galaxies. Computer models indicate that old red galaxies, which are far more massive than the Milky Way, should be considerably more common than they are. In their youth, these galaxies likely ejected a large fraction of their gas that would have otherwise formed stars.

Gas can be removed from a galaxy in two ways. One is through the action of a central, supermassive black hole, called an active galactic nucleus. Material is pulled into the black hole, becomes superheated and produces powerful jets or wide-angle winds that can propel material far from the galactic disk. However, evidence suggests that the black hole at the center of NGC 253 is not currently active.

The other way to potentially blow gas out of a galaxy is through galactic winds generated by star formation, but previously this had not been observed with enough resolution or sensitivity to measure the outflow of gas or its reductive impact on subsequent star formation.

As new stars form they exert powerful destructive influences on their environment. Initially, their light and winds of particles push on the surrounding gas. Later, if they are massive enough, stars explode as supernovas, a process that further drives the surrounding material away from the stellar birthplace. The current study indicates that in NGC 253, the concentration of hundreds or thousands of such destructive stars in one region is responsible for launching powerful flows of gas out of the galaxy.

Previous X-ray spectrum observations of NGC 253 have shown gas made of hot ionized hydrogen atoms streaming away from its star-forming regions. However, alone this insubstantial gas would have little if any impact on the fate of the galaxy and its ability to form future generations of stars. The new ALMA data show the far-more-dense molecular gas getting its initial "kick" from the formation of new stars and then being swept along with the thin, hot gas on its way to the galactic halo.

Using only a portion of its eventual full complement of 66 antennas, ALMA measured the mass and motion of carbon monoxide (CO) in the gas ejected from the central regions of this galaxy. The researchers determined that vast quantities of molecular gas – likely 9 times the mass of our Sun and possibly much more – were being ejected from the galaxy each year. At this rate, the galaxy could run out of gas and star formation slow to a crawl as in as few as 60 million years.

The researchers also determined that the gas is traveling somewhere between 25 to 155 miles (40 to 250 kilometers) per second, streaming approximately 1,500 light-years above and below the disk. This may not be fast enough for the gas to reach escape velocity from the galaxy. If not, the gas will likely get suspended in the galactic halo for many millions of years.

"More studies with the full ALMA array will help us figure out the ultimate fate of the gas carried away by the wind," said Adam Leroy with the National Radio Astronomy Observatory, a facility of the National Science Foundation (NSF). "This will help us understand whether these starburst-driven winds recycle or truly remove star forming material."

Bolatto agrees, but says: "Probably in a galaxy like this, the gas is pulled back into the heart of the galaxy, perhaps after several hundred million years. Star formation then takes off again and the whole process repeats itself."

The National Science Foundation (NSF) provided core funding for this research through multiple grants to the university-based U.S. scientists as well as through NSF support of NRAO and ALMA construction and operations.

"Understanding how galaxies can evolve so radically and so dramatically is one of the hottest topics in astronomy today," said Dan Evans, NSF program officer. "This work will have far-reaching implications for our understanding of the evolution of the cosmos. The result also is a true testament to the partnerships forged over many years between the University of Maryland research team, NSF and its international partners in the ALMA Project.


Contacts and sources:
Lee Tune
University of Maryland
on July 24, 2013