Video: Mysterious Process At The Heart Of All Explosions On The Sun

Two NASA spacecraft have provided the most comprehensive movie ever of a mysterious process at the heart of all explosions on the sun: magnetic reconnection. 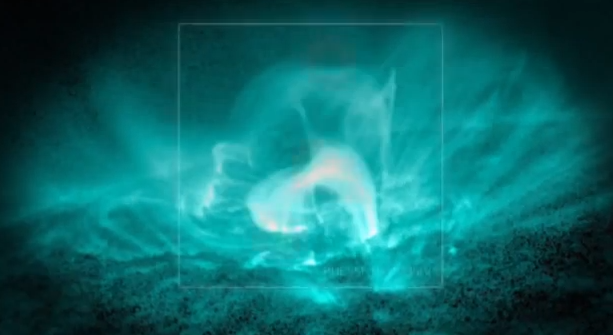 Magnetic reconnection happens when magnetic field lines come together, break apart, and then exchange partners, snapping into new positions and releasing a jolt of magnetic energy. This process lies at the heart of giant explosions on the sun such as solar flares and coronal mass ejections, which can fling radiation and particles across the solar system.


Magnetic field lines, themselves, are invisible, but the sun's charged plasma particles course along their length. Space telescopes can see that material appearing as bright lines looping and arcing through the sun's atmosphere, and so map out the presence of magnetic field lines.

Looking at a series of images from the Solar Dynamics Observatory (SDO), scientists saw two bundles of field lines move toward each other, meet briefly to form what appeared to be an "X" and then shoot apart with one set of lines and its attendant particles leaping into space and one set falling back down onto the sun.

To confirm what they were seeing, the scientists turned to a second NASA spacecraft, the Reuven Ramaty High Energy Solar Spectroscopic Imager (RHESSI). RHESSI collects spectrograms, a kind of data that can show where exceptionally hot material is present in any given event on the sun.

RHESSI showed hot pockets of solar material forming above and below the reconnection point, an established signature of such an event. By combining the SDO and RHESSI data, the scientists were able to describe the process of what they were seeing, largely confirming previous models and theories, while revealing new, three-dimensional aspects of the process.