Sex And The Robot Frog

With the help of a robotic frog, biologists at The University of Texas at Austin and Salisbury University have discovered that two wrong mating calls can make a right for female túngara frogs. 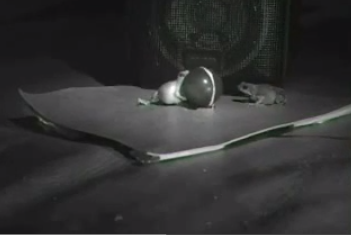 The “rather bizarre” result may be evidence not of a defect in the frog brain, but of how well frogs have evolved to extract meaning from noise, much the way humans have. The research, which was published last month in Science, may also provide insight into how complex traits evolve by hooking together much simpler traits.

In an innovative experiment, biologists Michael Ryan and Ryan Taylor played around with those visual and auditory signals. They took a recording of a basic whine, then added a robotic frog that inflated its vocal sac late. They ran a parallel experiment with a chuck that arrived late relative to the whine.

On their own neither the late vocal sac expansion or the sluggish chuck added to the sex appeal of the whine. In both cases it was as if the frog had just whined.

When the late cues were strung together, however, something extraordinary happened. The vocal sac “perceptually rescued” the chuck and bound it together with the first part of the whine-chuck call. The resulting signal was as attractive to the female túngara frogs as a well-timed “whine-chuck.”

“It never would happen in nature, but it’s evidence of how much jury-rigging there is in evolution, that the female can be tricked in this way,” said Ryan, the Clark Hubbs Regents Professor of Zoology in the College of Natural Sciences at The University of Texas at Austin.

Ryan compared the phenomenon to what’s called a “continuity illusion” in humans. If loud enough white noise is played in between a pair of beeps, humans will begin to perceive the beeps as a continuous tone. It’s not fully understood why this happens, but it’s probably a byproduct of our brains’ useful ability to filter out background noise.

Túngara frogs are challenged by an auditory world similar to what confronts humans in noisy environments (what’s called the “cocktail party problem” by cognitive scientists). At breeding choruses there is a lot of noise and cross talk, with sounds and images of several males reaching the female at different times. The females need to extract meaningful information from all of that. Ryan said it’s plausible the neural mechanisms that enable them to correctly parse these stimuli in nature are being hijacked by this artificial scenario.

“We need to be able to hook things together perceptually in unexpected ways to extract meaningful stimuli from a lot of noise,” said Ryan. “So what we think is happening here is that the vocal sac, the visual cue, is working kind of like the white noise, giving perceptual continuity between these two sounds, binding the temporally displaced whine and chuck together.”

Ryan said that although the frogs’ aggressive search for meaning leaves them open to being tricked by clever researchers, it could also enable more flexibility in complex situations. He believes it may have a much longer-term evolutionary advantage as well.

“It’s an example of how complex traits could emerge from simpler ones,” he said. “In this case there’s no obvious advantage to these two behaviors being hooked together in this way, but think of how you can take a muscle and move its insertion on the bone and have a great influence on speed. You didn’t get the evolution for these bones and muscles all at the same time, but just by making a change or adding a muscle, now you change the functional coupling. You end up with something really complex, but it evolved in a really simple way. I think in this case we may be seeing an example of how that could happen.”

R.C. Taylor is an associate professor of biology at Salisbury University in Maryland.