The Pitch Drop experiment set up in 1944 at Trinity College Dublin's School of Physics is one of the world's oldest continuously running experiments.

The experiment was established to demonstrate that pitch is a material that flows, albeit with an incredibly high viscosity hence extremely slowly. Also known as asphalt or bitumen, pitch appears to be solid at room temperature. 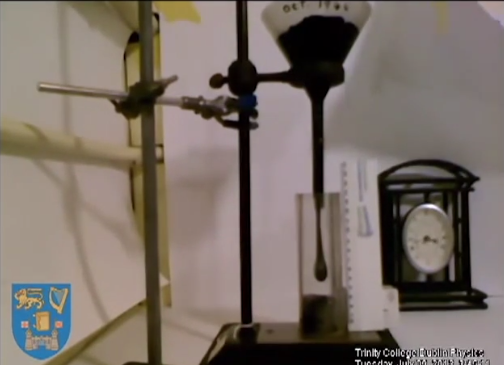 Whilst pitch has been dropping from the funnel in Trinity since 1944, nobody had ever witnessed a drop fall. It happens roughly only once in a decade.

In May of this year, with the latest drop about to fall, Professor Shane Bergin broadcast the experiment via the web. On July 11th, the drop dripped. You can see a time lapse video of this here.

Commenting on the significance of the demonstration, Professor Shane Bergin stated: “People love this experiment because it gets to the heart of what good science is all about – curiosity. Over these past few months, there has been constant chat about when the drip would drop. I watched the time lapse video of the pitch drop falling over and over again. I was amazed. This was the first time this phenomenon was ever witnessed!”

The School of Physics at Trinity College Dublin has many old demonstrations and ancient experimental kit. The Pitch Drop experiment was begun when Nobel Prize winner Earnest Walton was head of the department.

The University of Queensland have a similar experiment that was begun in 1927. The Guinness Book of World Records ranks this as the world’s longest running experiment. Whilst 8 drops have fallen in this experiment, nobody has ever witnessed one fall.

Whilst it will be roughly another 10 years before the next drop falls, you can look at the live experiment here.

The full NATURE article can be found here.