NOAA-supported scientists found a large Gulf of Mexico oxygen-free or hypoxic "dead" zone, but not as large as had been predicted. Measuring 5,840 square miles, an area the size of Connecticut, the 2013 Gulf dead zone indicates nutrients from the Mississippi River watershed are continuing to affect the nation's commercial and recreational marine resources in the Gulf.

This map shows the hypoxia area on the Louisiana Gulf of Mexico shelf in 2013. 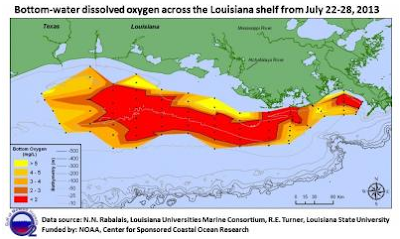 "A near-record area was expected because of wet spring conditions in the Mississippi watershed and the resultant high river flows which deliver large amounts of nutrients," said Nancy Rabalais, Ph.D. executive director of the Louisiana Universities Marine Consortium (LUMCON), who led the July 21-28 survey cruise. "But nature's wind-mixing events and winds forcing the mass of low oxygen water towards the east resulted in a slightly above average bottom footprint."

Hypoxia is fueled by nutrient runoff from agricultural and other human activities in the watershed. These nutrients stimulate an overgrowth of algae that sinks, decomposes and consumes most of the oxygen needed to support life. Normally the low or no oxygen area is found closer to the Gulf floor as the decaying algae settle towards the bottom. This year researchers found many areas across the Gulf where oxygen conditions were severely low at the bottom and animals normally found at the seabed were swimming at the surface.

This is in contrast to 2012, when drought conditions resulted in the fourth smallest dead zones on record, measuring 2,889 square miles, an area slightly larger than Delaware. The largest previous dead zone was in 2002, encompassing 8,481 square miles. The smallest recorded dead zone measured 15 square miles in 1988. The average size of the dead zone over the past five years has been 5,176 square miles, more than twice the 1,900 square mile goal set by the Gulf of Mexico / Mississippi River Watershed Nutrient Task Force in 2001 and reaffirmed in 2008.

This is a bar graph showing hypoxic trends, task force goals and the last five years' average for period 1985-2013 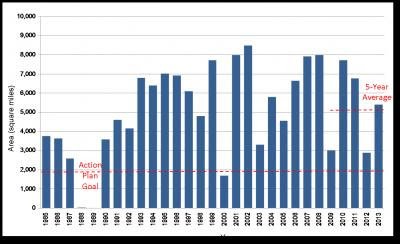 "NOAA's investment in the Gulf of Mexico continues to yield results that confirm the complex dynamics of hypoxia and provide managers and the public with accurate scientific information for managing and restoring the nation's valuable coastal resources," said Robert Magnien, Ph.D., director of NOAA's Center for Sponsored Coastal Ocean Research. "For those who depend upon and enjoy the abundant natural resources of the Gulf of Mexico, it is imperative that we intensify our efforts to reduce nutrient pollution before the ecosystem degrades any further."

This annual measurement provides federal and state agencies working on the 2008 Gulf task force implementation actions with the real consequences of inadequate nutrient pollution management. The task force's actions are set for review this summer.

The hypoxic zone off the coast of Louisiana and Texas forms each summer threatening the ecosystem supporting valuable commercial and recreational Gulf fisheries that in 2011 had a commercial dockside value of $818 million and an estimated 23 million recreational fishing trips. The Gulf task force, in its 2008 report, states that "hypoxia has negative impacts on marine resources." It further states that research on living resources in the Gulf show long term ecological changes in species diversity and a large scale, often rapid change, in the ecosystem's food-web that is both "difficult and impossible to reverse." Additionally, there are numerous annual areas of the Gulf where large scale fish kills occur as a result of hypoxia.

Two surveys conducted in June and early July, one of which was led by a NOAA-supported Texas A&M University team, suggested a large hypoxic zone was forming in the Gulf, though the LUMCON July measurement will be the official one as required of NOAA by the Task Force. NOAA's National Marine Fisheries Service, in conducting its Southeast Monitoring and Assessment Program groundfish surveys, also found large expanses of hypoxia in June-early July. Texas A&M will be conducting a follow-up cruise in mid-August to provide its final seasonal update.

NOAA's National Ocean Service has been funding monitoring and research for the dead zone in the Gulf of Mexico since 1985 and currently oversees the NGOMEX program, the hypoxia research effort for the northern Gulf which is authorized by the Harmful Algal Bloom and Hypoxia Research and Control Act.

NOAA's mission is to understand and predict changes in the Earth's environment, from the depths of the ocean to the surface of the sun, and to conserve and manage our coastal and marine resources. Join us on Facebook, Twitter and our other social media channels.