First Snow Ever Seen Around A Star Thrills Astronomers

The sight of a snowfall can thrill children, but the first-ever snow line seen around a distant star gives astronomers an even greater thrill because of what it reveals about the formation of planets and our solar system's history.

Astronomers using the new Atacama Large Millimeter/submillimeter Array (ALMA) telescope have taken the first-ever image of a snow line in an infant solar system. This frosty landmark is thought to play in an essential role in the formation and chemical make-up of planets around a young star.

On Earth, snow lines typically form at high elevations where falling temperatures turn atmospheric moisture to snow. In much the same way, snow lines are thought to form around young stars in the distant, colder reaches of the disks from which solar systems form. Depending on the distance from the star, however, other more exotic molecules can freeze and turn to snow.

Familiar water ice freezes out first, then moving outward in concentric circles other abundant gases like carbon dioxide (CO2), methane (CH4), and carbon monoxide (CO) freeze, forming a frost on dust grains, which are the building blocks of planets and comets.

ALMA spotted a never-before-seen CO snow line around TW Hydrae, a young star 175 light-years away from Earth. Astronomers believe this nascent solar system has many of the same characteristics that our own Solar System had when it was just a few million years old. The results were published in Science Express.

"ALMA has given us the first real picture of a snow line around a young star, which is extremely exciting because of what it tells us about the very early period in the history of our own Solar System," said Chunhua "Charlie" Qi, a researcher with the Harvard-Smithsonian Center for Astrophysics in Cambridge, Mass., who led the international research team with Karin Oberg, a researcher with Harvard University and the University of Virginia in Charlottesville.

ALMA image (green) shows the region where CO snow has formed around the star TW Hydrae (indicated at center). The blue circle represents where the orbit of Neptune would be when comparing it to the size of our solar system. 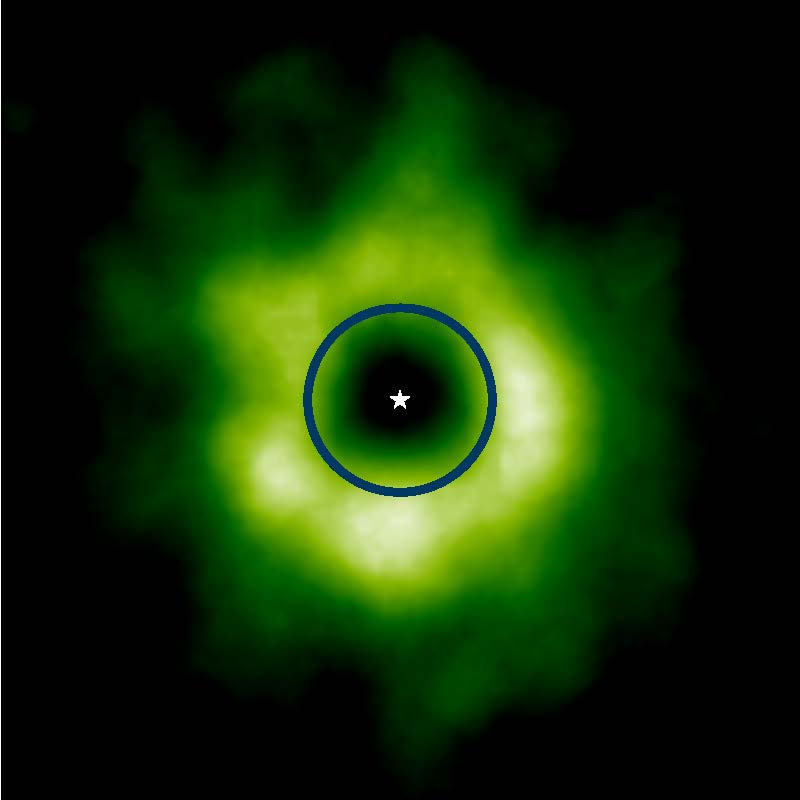 "We can now see previously hidden details about the frozen outer reaches of another solar system, one that has much in common with our own when it was less than 10 million years old," said Qi.

Snow lines have, until now, only been detected by their spectral signatures; they have never been imaged directly, so their precise location and extent could not be determined.

This is because snow lines form exclusively in the relatively narrow central plane of a protoplanetary disk. Above and below this region, stellar radiation keeps the gases warm, preventing them from forming ice. Only with the insulating effect of the concentrated dust and gas in the central plane of the disk can temperatures drop sufficiently for CO and other gases to cool and freeze.

Normally, this outer cocoon of hot gas would prevent astronomers from peering inside the disk where the gas had frozen out. "It would be like trying to find a small, sunny patch hidden within a dense fogbank," said Oberg.

The astronomers were able to pierce the intervening CO fog by instead hunting for a different molecule known as diazenylium (N2H+). This fragile molecule is easily destroyed in the presence of CO gas, so would only appear in detectable amounts in regions where CO had frozen out, and is hence a proxy for CO ice.

Diazenylium shines brightly in the millimeter portion of the spectrum, which can be detected by radio telescope like ALMA here on Earth.

ALMA's unique sensitivity and resolution allowed the astronomers to trace the presence and distribution of diazenylium, finding a clearly defined boundary approximately 30 astronomical units (AU) from TW Hydrae (one AU is the Sun-Earth distance).

"Using this technique, we were able to create, in effect, a photonegative of the CO snow in the disk surrounding TW Hydrae," said Oberg. "With this we could see the CO snow line precisely where theory predicts it should be -- the inner rim of the diazenylium ring."

Snow lines, astronomers believe, serve a vital role in the formation of a solar system. They help dust grains overcome their normal tendency to collide and self-destruct by giving the grains a stickier outer coating. They also increase the amount of solids available and may dramatically speed up the planet formation process. Since there are multiple snow lines, each may be linked to the formation of specific kinds of planets.

Oberg also points out that the CO snow line is particularly interesting since CO ice is needed to form methanol, which is a building block of more complex organic molecules that are essential for life. Comets and asteroids could then ferry these molecules to newly forming Earth-like planets, seeding them with the ingredients for life.

These observations were made with only a portion of ALMA's eventual full complement of 66 antennas. The researchers hope future observations with the full array will reveal other snow lines and provide additional insights into the formation and evolution of planets.

The National Radio Astronomy Observatory is a facility of the National Science Foundation, operated under cooperative agreement by Associated Universities, Inc..

Contacts and sources:
David A. Aguilar
Harvard-Smithsonian Center for Astrophysics
on July 19, 2013