Exploring The Extreme Universe With A Rich New Resource

Scientists led by the University of Leicester have set a new record for cosmic X-ray sources ever sighted – creating an unprecedented cosmic X-ray catalogue that will provide a valuable resource allowing astronomers to explore the extreme Universe.

The XMM-Newton Survey Science Centre, led by a team from the University of Leicester's Department of Physics and Astronomy, used the University's 'ALICE' supercomputer to help them produce a new X-ray catalogue, dubbed "3XMM".
This is a sky distribution of the density of objects in the 3XMM catalog, shown in Galactic coordinates. The inset shows a zoom of the small region indicated where the individual sources can be seen. 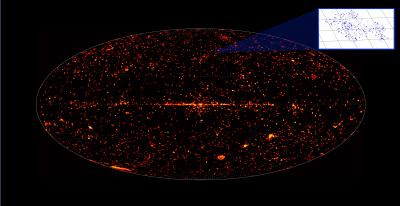 This new catalogue contains over half a million X-ray source detections, representing a 50% increase over previous catalogues and is the largest catalogue of X-ray sources ever produced. This vast inventory is also home to some of the rarest and most extreme phenomena in the Universe, such as tidal disruption events - when a black hole swallows another star, producing prodigious outbursts of X-ray emission.

Professor Mike Watson of the University of Leicester, who leads the XMM-Newton Survey Science Centre, said: "The catalogue contains more than half a million sources, all of which are provided to a better quality than ever before.

"Using the University's £2.2m High Performance Computer meant we could process the data up to a hundred times faster than before. This was key for testing and implementing advanced new processing strategies."

"The catalogue provides enormous scope for new discoveries as well as in-depth studies of large samples. XMM-Newton is pre-eminent amongst current X-ray missions in its ability to perform `survey' science, with a chance to find previously undetected objects and then explore their properties."

The XMM-Newton Survey Science Centre is one of the teams behind the European Space Agency's (ESA) X-ray Multi-Mirror Mission (XMM-Newton). Since Earth's atmosphere blocks out all X-rays, only a telescope in space can detect and study celestial X-ray sources. The XMM-Newton mission is helping scientists to solve a number of cosmic mysteries, ranging from the enigmatic black holes to the origins of the Universe itself.

The sources in the 3XMM catalogue are identified and isolated from serendipitous data recorded by XMM-Newton's EPIC X-ray cameras, built by a team also led by the University. In each of the 600-700 observations made each year, around 70 extra sources are captured in addition to the target object which usually only takes up a small fraction of the field of view. Covering observations between February 2000 and December 2012, the catalogue contains some 531 261 X-ray source detections relating to 372 728 unique X-ray sources.

Professor Watson, who is Head of X-ray and Observational Astronomy in the Department of Physics and Astronomy, adds: "The third XMM-Newton Serendipitous Source Catalogue shows how much added value can be gained from the observations. I'd like to pay tribute to the efforts of the whole team which were crucial to completing this major undertaking.

"3XMM is the largest catalogue of X-ray sources ever produced. As such it offers an unparalleled resource for exploring cosmic X-ray populations, in particular in studying Active Galactic Nuclei (AGN) - those galaxies such as quasars which harbour a super-massive black hole at their centres. Such active galaxies dominate the detections in the 3XMM catalogue, meaning that 3XMM is the key to unlocking a storehouse of several hundred thousand AGN."


Contacts and sources:
Mike Watson
University of Leicester
on July 24, 2013