The caves of the Sierra de Atapuerca contain a rich fossil record of the earliest human beings in Europe, from nearly one million years ago and extending up to the Common Era. They represent an exceptional reserve of data, the scientific study of which provides priceless information about the appearance and the way of life of these remote human ancestors.

Archaeologists excavating the prehistoric site of Atapuerca in northern Spain, announced on Wednesday (July 24) the discovery of a 1.4 million year old  flint knife. This is the oldest trace of human presence ever found in Europe. 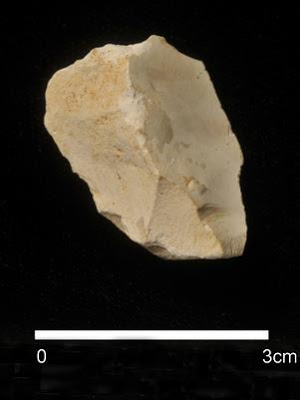 Credit: EIA / Jordi Mestre
The three-centimeter (1.2-inch) flint blade, which measures approximately 3 centimeters, was discovered in the Sima del Elefante also known as the Elephant Chasm cave, about two feet below where a 1.2 million year old hominid jaw found in 2007. The jaw is the oldest found in Europe.

The jawbone also shows evidence of extensive wear and minor periodontal disease. The jaw, found by a team led by Eudald Carbonell of the Universitat Rovira i Virgili in Tarragona, is by far the oldest human bone ever found in the region. The previous oldest fossils have been perhaps 800,000 years old, leading some anthropologists to believe that primitive humans did not reach Western Europe until around half a million years ago. The petite jaw suggests the oldest-found European was probably female. 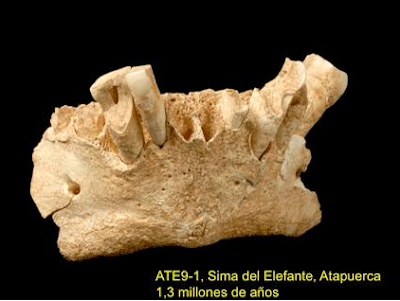 The fragment is of  great value as the knife shows humans occupied the area 1.4 million years ago, said one of the directors of the excavation, Eduald Carbonell.

"We think  with this finding, we approach the limit accepted for the first occupation of Western Europe, which is approximately 1.5 million years," the researchers announced in a statement.

A wealth of exceptional archaeological deposits of the Sierra de Atapuerca, near Burgos, cover a period up to 1.5 million years.

Stone tools discovered in this campaign " confirm the continuity of human settlement in Europe, from its origin, there  approximately 1.5 million years ago, until the appearance of Homo antecessor, there are 850,000 years," the statement added.

These findings  "contradict the assumptions made ​​by some researchers," who think the first peopling of Europe came from the succession of small waves of hominids,  with no continuity in time and were doomed to extinction, given their inability to adapt to new places .

“Even though they are very archaic tools, they reflect complex activities such as recovering animals that fell into the caves,” which functioned as traps, the statement said.

Researchers also found the remains of a large bear which is an ancestor to the brown bear that exists today. Various remains of the bear were found at the site, as well as those of other animals such as rhinos, giant deer, bison and wild donkeys.

Archaeologists  also showed another rare item they discovered — a fossilized shoulder blade of a child between the ages of four and six dating back 800,000 years.
The Sierra de Atapuerca is a small mountain range and ancient karst topography region of northern Spain, about 14 km east of Burgos. where several caves are located with evidence of very old occupations, dated to the Paleolithic period.

Sima del Elefante ("elephant's pit", also called Trinchera Elefante or "elephant's trench"  is a karst rock shelter located in the Sierra de Atapuerca mountain range of northern Spain. The cave measures 18 meters deep and up to 15 meters wide, and it contains sixteen stratigraphic levels, the oldest of which represents hominin fossils of an undetermined Homospecies, dated using paleomagnetic methods to between 1.1 and 1.3 million years ago.
Evidence that Sima del Elefante is one of the very earliest humans outside of Africa is partially supported by morphological comparisons to other early hominins, reported in 2011. A recent study found similarities between the Sima del Elefante teeth and those from Dmanisi and early African Homo. However, other aspects of the mandible are not like African Homo, leading researchers to suggest that speciation might have taken place over the long period of time during which Eurasia was populated. This study also led the researchers to conclude that the hominin at Sima del Elefante would be better named as Homo sp., rather than H. antecessor, as they had originally suggested. See Bermúdez de Castro et al. 2011 for additional information.


The Sierra de Atapuerca sites provide unique testimony of the origin and evolution both of the existing human civilization and of other cultures that have disappeared. The evolutionary line or lines from the African ancestors of modern humankind are documented in these sites. The earliest and most abundant evidence of humankind in Europe is to be found in the Sierra de Atapuerca. The sites constitute an exceptional example of continuous human occupation, due to their special ecosystems and their geographical location. The fossil remains in the Sierra de Atapuerca are an invaluable reserve of information about the physical nature and the way of life of the earliest human communities in Europe.


The site is located at the north-eastern corner of the Castilian plateau. Although more than 1,000 m above sea level, it is now no more than a gently sloping limestone ridge, largely covered with scrub and with some farming. Water erosion over the past 5 million years has led to the formation of a karst landscape with an elaborate cave system. The water table became lower as a result of geomorphological processes, making the caves suitable for animals and humans to live in them. The system of terraces formed along the southern margin of the Sierra shows that, during the Middle and Lower Pleistocene, streams flowed close to the entrances of these caves, making them especially suitable for human occupation.


The earliest fossil hominid remains in Europe, the Pleistocene deposits, from around 800,000 BP as established by palaeomagnetic analysis, were found in the Gran Dolina site in the Sierra de Atapuerca, one of the Trinchera del Ferrocarril group. They are associated with simple stone tools of the pre-Acheulean type, which is consistent with the dating of the earliest levels of this site. Also in the Trinchera del Ferrocarril group of sites are those known as Tres Simas. The oldest human remains from the Galería site have been dated to between 200,000 and 400,000 BP, associated with Acheulean stone tools. Similar dates have been established for human skeletal remains from the Sima de los Huesos in the Cueva Mayor. The absence of herbivores consumed by humans in this site, where the remains of no fewer than 32 humans have been discovered, suggests that this may have been a mortuary site. The relatively large sample, largely of adolescents and young adults, has permitted a number of important studies to be carried out on the palaeopathology of this population, the growth and development of individuals, and their average size.

The Holocene deposits are dated to the Quaternary period. The archaeological significance of the Portalón of the Cueva Mayor was first recognized in 1910, when the representation of a horse's head found at the entrance to the cave was identified as Palaeolithic. Subsequent excavations have established that it was occupied by various human groups over many centuries, mainly at the beginning of the Bronze Age and again during the Roman period and the early Visigothic period. The Galería del Silex contains abundant evidence of human occupation during the Neolithic and Bronze age. More fifty painted and engraved panels have been recorded, with geometrical motifs, hunting scenes, and anthropomorphic and zoomorphic figures.

Excavation has revealed a sanctuary in which funerary rites took place, with human remains (largely young adults and children) and ceramic fragments, identified as being related to sacrificial activities. At the far end of the gallery the flint from which the cave takes its name was exploited. There is evidence of there having been a similar sanctuary in the Cueva del Silo. Human activities have also been recorded at several other sites, such as the Cueva Peluda, the Cueva Ciega, and El Mirador. Human activity declined in the Sierra de Atapuerca with the creation of permanent settlements in the plains below, especially in the Middle Ages.

Scientific interest in the caves began in the mid-19th century, concentrating on the Cueva Mayor. This is entered from the south, giving access immediately to El Portalón. To the east lies the sinuous Galería del Silex, extending more than 300 m, and to the west the sequence of caves (including the Sima de los Huesos - 'Pit of the Bones') leading over 1 km to the Galería del Silo, which has its own access. To the north-west is the group of sites revealed by excavation of a mining railway cutting (from which it takes its name, La Trinchera del Ferrocarril), never to be completed. These are in fact caves brought to light by the cutting and so with the appearance of rock shelters. To the north is the Gran Dolina, and further southwards are the Tres Simas, with the important finds at La Galería.