The real-life CIA copied outlandish gadgets from Goldfinger and From Russia With Love, according to a University of Warwick analysis of declassified letters and interviews revealing the bond between Ian Fleming and Allen Dulles. 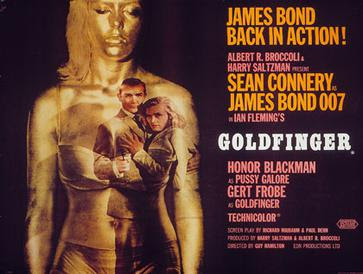 However the relationship between the former CIA director and the spy thriller writer went far deeper than raiding the novels for technological inspiration.

Through Dulles, the agency actively leaned on the British author to paint it in more positive light at a time when US film-makers, authors and journalists were silent about the activities of the CIA, fearful to even mention it by name.

Dr Christopher Moran from the University of Warwick has trawled through declassified letters and media reports from the 1950 and 60s for the study, Ian Fleming and the Public Profile of the CIA, published in the Journal of Cold War Studies.

He said: “There was a surprising two-way influence between the CIA and the James Bond novels during the Cold War, stemming from the mutual admiration between Allen Dulles and Ian Fleming.

“This ranged from the copying of devices, such as the poison-tipped dagger shoe in From Russia With Love, to the agency using the 007 novels to improve its public profile.

“It’s even more striking that this was going on at time when mentioning the CIA was strictly off-limits for the US media and cultural establishment, whereas Fleming, as a British author, could say what he liked.

“For a long time, the James Bond books had a monopoly on the CIA’s public image and the agency used this to its advantage.”

Declassified letters between Allen Dulles and Ian Fleming reveal the former CIA boss’s strong affection for the Bond novels – he even persuaded the author not to pension off 007 in 1963.

And in a rediscovered 1964 edition of Life Magazine, Dulles describes his meeting with the ‘brilliant and witty’ Fleming in London in 1959 where the author told him that the CIA was not doing enough in the area of ‘special devices’.

On his return to the US, Dulles urged CIA technical staff to replicate as many of Bond’s devices as they could.

But it had less luck with the homing beacon device used in Goldfinger to track the villain's car – the CIA version had ‘too many bugs in it’, Dulles said, and stopped working when the enemy entered a crowded city.

The letters between Dulles and Fleming also show how the CIA tapped into James Bond for public relations support, with the author agreeing to include a number of glowing references to the CIA in his later novels. He did this out of respect for Dulles, a close friend, but the effect was to promote the image of the CIA. In return, Dulles rhapsodised about Fleming in the American press, even saying on one occasion that his organisation “could do with a few James Bonds”.

Dr Moran said: “The early 007 novels, written in the 1950s, introduce millions of readers to the CIA for the first time through the character of its agent Felix Leiter.

“Although Fleming’s portrayal of the CIA is largely favourable, readers are left in no doubt that the British intelligence services are the superior outfit.

“In Live and Let Die, for example, Leiter comes across as a bit of a bungler, unable to blend in with the locals and forced to rely on paid informants.

“But in the later books, as the friendship between Dulles and Fleming deepens, a far rosier picture of the CIA emerges.

“For example, in Thunderball, Bond’s boss ‘M’ dispenses with his characteristic economy of words to speak enthusiastically about the way the CIA is selflessly putting itself in the service of freedom.

“And Allen Dulles is even the subject of several honourable mentions in the later books.

“It really does come across as a bit of a mutual appreciation society.”