The Planck space mission has released the most accurate and detailed map ever made of the oldest light in the universe. The universe according to Planck is expanding a bit more slowly than thought, and at 13.8 billion is 100 million years older than previously estimated. There is a bit less dark energy and a bit more of both normal and dark matter in the universe — although the nature of dark energy and dark matter remain mysterious.

“Planck’s high-precision map of the oldest light in our universe allows us to extract the most refined values yet of the universe’s ingredients,” said Lloyd Knox, a physics professor at UC Davis and the leader of the U.S. team determining these ingredients from the Planck data. UC Davis graduate student Marius Millea and postdoctoral scholar Zhen Hou also worked with Knox on the analysis.

This May, UC Davis will host back-to-back conferences on “Mining the Cosmic Frontier in the Planck Era” (May 20-22) and “Fundamental Questions in Cosmology” (May 22-24). These will be the first major meetings in the U.S. for researchers to discuss the new data.

Planck is a European Space Agency mission with collaboration from NASA. It was launched in 2009 to a point almost a million miles from Earth where it can look into deep space and map tiny differences in the cosmic microwave background, the faint glow of radiation left over from just after the big bang. 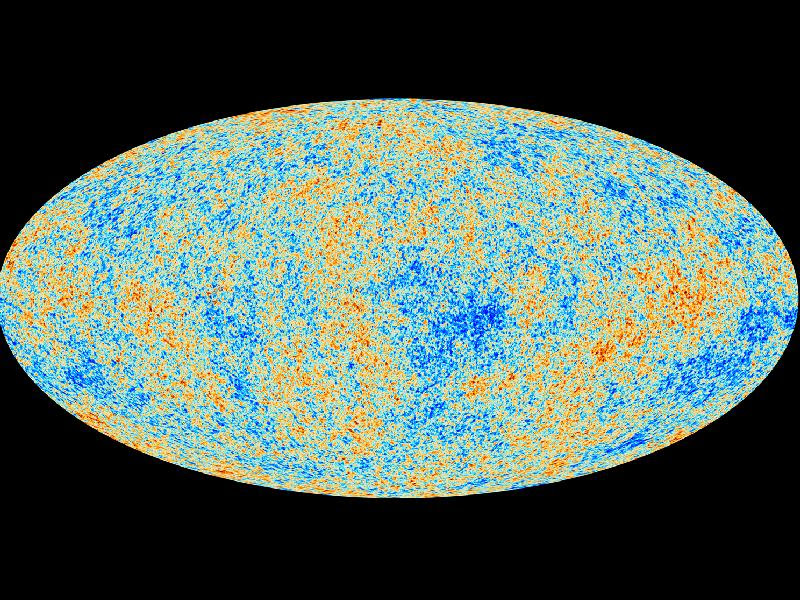 
For the first 370,000 years of the universe’s existence, light was trapped inside a hot plasma, unable to travel far without bouncing off electrons. Eventually the plasma cooled enough for light particles (photons) to escape, creating the patterns of the cosmic microwave background. The patterns of light represent the seeds of galaxies and clusters of galaxies we see around us today.

Then these photons traveled through space for billions of years, making their way past stars and galaxies, before falling into Planck’s detectors. The gravitational pull of both galaxies and clumps of dark matter pulls photons onto new courses, an effect called “gravitational lensing.”

“Our microwave background maps are now sufficiently sensitive that we can use them to infer a map of the dark matter that has gravitationally-lensed the microwave photons,” Knox said. “This is the first all-sky map of the large-scale mass distribution in the Universe.”

The Planck observatory has produced the most detailed map to date of mass distribution in the universe.

These new data from Planck have allowed scientists to test and improve the accuracy of the standard model of cosmology, which describes the age and contents of our universe.

Based on the new map, the Planck team estimates that the expansion rate of the universe, known as Hubble’s constant, is 67.15 plus or minus 1.2 kilometers/second/megaparsec. (A megaparsec is roughly 3 million light-years.) That’s less than prior estimates derived from space telescopes, such as NASA’s Spitzer and Hubble.

The new estimate of dark matter content in the universe is 26.8 percent, up from 24 percent, while dark energy falls to 68.3 percent, down from 71.4 percent. Normal matter now is 4.9 percent, up from 4.6 percent.

At the same time, some curious features are observed that don’t quite fit with the current model. For example, the model assumes the sky is the same everywhere, but the light patterns are asymmetrical on two halves of the sky, and there is larger-than-expected cold spot extending over a patch of sky.

“On one hand, we have a simple model that fits our observations extremely well, but on the other hand, we see some strange features which force us to rethink some of our basic assumptions,” said Jan Tauber, the European Space Agency’s Planck project scientist based in the Netherlands.

Scientists can also use the new map to test theories about cosmic inflation, a dramatic expansion of the universe that occurred immediately after its birth. In far less time than it takes to blink an eye, the universe blew up by 100 trillion trillion times in size. The new map, by showing that matter seems to be distributed randomly, suggests that random processes were at play in the very early universe on minute “quantum” scales. This allows scientists to rule out many complex inflation theories in favor of simple ones.

“Patterns over huge patches of sky tell us about what was happening on the tiniest of scales in the moments just after our universe was born,” said Charles Lawrence, the U.S. project scientist for Planck at NASA’s Jet Propulsion Laboratory (JPL) in Pasadena, Calif.

Planck is the successor to balloon-based and space missions that helped astronomers learn a great deal from the microwave background, including NASA’s Wilkinson Microwave Anisotropy Probe (WMAP) and the Cosmic Background Explorer (COBE), which earned the 2006 Nobel Prize in Physics. Complete results from Planck, which still is scanning the skies, will be released in 2014.