The Department of Energy's Oak Ridge National Laboratory has begun delivery of germanium-76 detectors to an underground laboratory in South Dakota in a team research effort that might explain the puzzling imbalance between matter and antimatter generated by the Big Bang.

“It might explain why we’re here at all,” said David Radford, who oversees specific ORNL activities in the Majorana Demonstrator research effort. “It could help explain why the matter that we are made of exists.”

The Majorana Demonstrator is being assembled and stored 4,850 feet beneath the earth's surface in enriched copper to limit the amount of background interference from cosmic rays and radioactive isotopes. 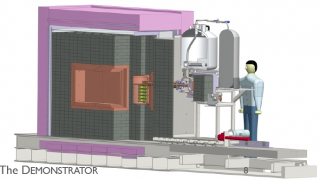 Radford, a researcher in ORNL's Physics Division and an expert in germanium detectors, has been delivering germanium-76 to Sanford Underground Research Laboratory (SURF) in Lead, S.D., for the project. After navigating a Valentine’s Day blizzard on the first two-day drive from Oak Ridge, Radford made a second delivery in March.

ORNL serves as the lead laboratory for the Majorana Demonstrator research effort, a collaboration of research institutions representing the United States, Russia, Japan and Canada. The project is managed by the University of North Carolina’s Prof. John Wilkerson, who also has a joint faculty appointment with ORNL.

Research at SURF is being conducted 4,850 feet beneath the earth’s surface with the intention of building a 40-kilogram germanium detector, capable of detecting the theorized neutrinoless double beta decay. Detection might help to explain the matter-antimatter imbalance.

Before the detection of the unobserved decay can begin, however, the germanium must first be processed, refined and enriched. Radford coordinated the multistep process, which includes an essential pit stop in Oak Ridge.

The 42.5 kilograms of 86-percent enriched white germanium oxide powder required for the project is valued at $4 million and was transported from a Russian enrichment facility to a secure underground ORNL facility in a specially designed container. The container’s special shielding and underground storage limited exposure of the germanium to cosmic rays.

Without such preventative measures, Radford says, “Cosmic rays transmute germanium atoms into long-lived radioactive atoms, at the rate of about two atoms per day per kilogram of germanium. Even those two atoms a day will add to the background in our experiment. So we use underground storage to reduce the exposure to cosmic rays by a factor of 100.”

The germanium must further undergo a reduction and purification process at two Oak Ridge companies, Electrochemical Systems, Inc. (ESI) and Advanced Measurement Technology (AMETEK), before being moved to its final destination in South Dakota. ESI works to reduce the powdered germanium oxide to metal germanium bars. ORTEC, a division of AMETEK, further purifies the bars, using the material to grow large single crystals of germanium, and turning those into one-kilogram cylindrical germanium detectors that will be used in the Demonstrator. Once they leave AMETEK, Radford and his team transport the detectors to SURF.

The enrichment process is lengthy. The Majorana Demonstrator project began the partnership with ESI four years ago. To date, ORNL has delivered -- via Radford's two trips -- nine of the enriched detectors, which are valued at about $2 million including the original cost of the enriched germanium oxide powder.

Requiring a total of 30 enriched detectors, the Majorana Demonstrator is not expected to be fully complete and operational until 2015.

Those involved in the Majorana research effort believe its completion and anticipated results will help pave the way for a next-generation detector using germanium-76 with unprecedented sensitivity. The future one-ton detector will help to determine the ratio and masses of conserved and annihilated lepton particles that are theorized to cause the initial imbalance of matter and antimatter from the Big Bang.

“The research effort is the first major step towards building a one-ton detector — a potentially Nobel-Prize-worthy project,” Radford says.

The Majorana Demonstrator research project is funded by the National Science Foundation and the Department of Energy’s Office of Nuclear Physics.

Contacts and sources:
Oak Ridge National Laboratory
on May 27, 2013