Rodents move their eyes in opposite directions, thereby always keeping an eye on the airspace above them

Scientists from the Max Planck Institute for Biological Cybernetics in Tübingen, using miniaturised high-speed cameras and high-speed behavioural tracking, discovered that rats move their eyes in opposite directions in both the horizontal and the vertical plane when running around. Each eye moves in a different direction, depending on the change in the animal’s head position.

An analysis of both eyes’ field of view found that the eye movements exclude the possibility that rats fuse the visual information into a single image like humans do. Instead, the eyes move in such a way that enables the space above them to be permanently in view – presumably an adaptation to help them deal with the major threat from predatory birds that rodents face in their natural environment.

Rats process visual information from their eyes similar to other mammals. Nevertheless, their eyes move in a very different way. Unlike humans, their eyes can move in opposite directions. 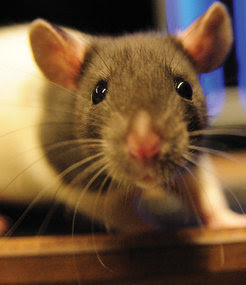 Like many mammals, rats have their eyes on the sides of their heads. This gives them a very wide visual field, useful for detection of predators. However, three-dimensional vision requires overlap of the visual fields of the two eyes. Thus, the visual system of these animals needs to meet two conflicting demands at the same time; on the one hand maximum surveillance and on the other hand detailed binocular vision.

The research team from the Max Planck Institute for Biological Cybernetics have now, for the first time, observed and characterised the eye movements of freely moving rats. They fitted minuscule cameras weighing only about one gram to the animals’ heads, which could record the lightning-fast eye movements with great precision. The scientists also used another new method to measure the position and direction of the head, enabling them to reconstruct the rats’ exact line of view at any given time.

The Max Planck scientists’ findings came as a complete surprise. Although rats process visual information from their eyes through very similar brain pathways to other mammals, their eyes evidently move in a totally different way. “Humans move their eyes in a very stereotypical way for both counteracting head movements and searching around. Both our eyes move together and always follow the same object. In rats, on the other hand, the eyes generally move in opposite directions,” explains Jason Kerr from the Max Planck Institute for Biological Cybernetics.

In a series of behavioural experiments, the neurobiologists also discovered that the eye movements largely depend on the position of the animal’s head. “When the head points downward, the eyes move back, away from the tip of the nose. When the rat lifts its head, the eyes look forward: cross-eyed, so to speak. If the animal puts its head on one side, the eye on the lower side moves up and the other eye moves down.” says Jason Kerr.

In humans, the direction in which the eyes look must be precisely aligned, otherwise an object cannot be fixated. A deviation measuring less than a single degree of the field of view is enough to cause double vision. In rats, the opposing eye movements between left and right eye mean that the line of vision varies by as much as 40 degrees in the horizontal plane and up to 60 degrees in the vertical plane. The consequence of these unusual eye movements is that irrespective of vigorous head movements in all planes, the eyes movements always move in such a way to ensure that the area above the animal is always in view simultaneously by both eyes –something that does not occur in any other region of the rat’s visual field.

These unusual eye movements that rats possess appear to be the visual system’s way of adapting to the animals’ living conditions, given that they are preyed upon by numerous species of birds. Although the observed eye movements prevent the fusion of the two visual fields, the scientists postulate that permanent visibility in the direction of potential airborne attackers dramatically increases the animals’ chances of survival.


Contacts and sources:
Dr. Jason Kerr
Max-Planck-Gesellschaft
on May 28, 2013