NASA Radar Reveals Asteroid Has Its Own Moon

A sequence of radar images of asteroid 1998 QE2 was obtained on the evening of May 29, 2013, by NASA scientists using the 230-foot (70-meter) Deep Space Network antenna at Goldstone, Calif., when the asteroid was about 3.75 million miles (6 million kilometers) from Earth, which is 15.6 lunar distances.

The radar imagery revealed that 1998 QE2 is a binary asteroid. In the near-Earth population, about 16 percent of asteroids that are about 655 feet (200 meters) or larger are binary or triple systems. Radar images suggest that the main body, or primary, is approximately 1.7 miles (2.7 kilometers) in diameter and has a rotation period of less than four hours. Also revealed in the radar imagery of 1998 QE2 are several dark surface features that suggest large concavities. The preliminary estimate for the size of the asteroid's satellite, or moon, is approximately 2,000 feet (600 meters) wide. The radar collage covers a little bit more than two hours.

First radar images of asteroid 1998 QE2 were obtained when the asteroid was about 3.75 million miles (6 million kilometers) from Earth. The small white dot at lower right is the moon, or satellite, orbiting asteroid 1998 QE2. 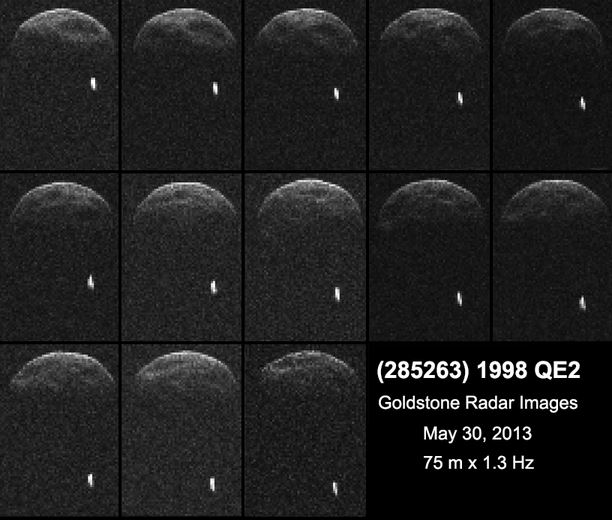 The closest approach of the asteroid occurs on May 31 at 1:59 p.m. Pacific (4:59 p.m. Eastern / 20:59 UTC), when the asteroid will get no closer than about 3.6 million miles (5.8 million kilometers), or about 15 times the distance between Earth and the moon. This is the closest approach the asteroid will make to Earth for at least the next two centuries. Asteroid 1998 QE2 was discovered on Aug. 19, 1998, by the Massachusetts Institute of Technology Lincoln Near Earth Asteroid Research (LINEAR) program near Socorro, N.M.

The resolution of these initial images of 1998 QE2 is approximately 250 feet (75 meters) per pixel. Resolution is expected to increase in the coming days as more data become available. Between May 30 and June 9, radar astronomers using NASA's 230-foot-wide (70 meter) Deep Space Network antenna at Goldstone, Calif., and the Arecibo Observatory in Puerto Rico, will perform an extensive campaign of observations on asteroid 1998 QE2. The two telescopes have complementary imaging capabilities that will enable astronomers to learn as much as possible about the asteroid during its brief visit near Earth.

Radar is a powerful technique for studying an asteroid's size, shape, rotation state, surface features and surface roughness, and for improving the calculation of asteroid orbits. Radar measurements of asteroid distances and velocities often enable computation of asteroid orbits much further into the future than if radar observations weren't available.

NASA places a high priority on tracking asteroids and protecting our home planet from them. In fact, the United States has the most robust and productive survey and detection program for discovering near-Earth objects. To date, U.S. assets have discovered more than 98 percent of the known Near-Earth Objects.

When Asteroid 1998 QE2 makes its closest approach to Earth on May 31, 2013, it promises to be a bonanza for radar science.
Credit; NASA

In 2012, the Near-Earth Object budget was increased from $6 million to $20 million. Literally dozens of people are involved with some aspect of near-Earth object research across NASA and its centers. Moreover, there are many more people involved in researching and understanding the nature of asteroids and comets, including those objects that come close to Earth, plus those who are trying to find and track them in the first place.

In addition to the resources NASA puts into understanding asteroids, it also partners with other U.S. government agencies, university-based astronomers, and space science institutes across the country that are working to track and better understand these objects, often with grants, interagency transfers and other contracts from NASA.

NASA's Near-Earth Object Program at NASA Headquarters, Washington, manages and funds the search, study, and monitoring of asteroids and comets whose orbits periodically bring them close to Earth. JPL manages the Near-Earth Object Program Office for NASA's Science Mission Directorate in Washington. JPL is a division of the California Institute of Technology in Pasadena.

In 2016, NASA will launch a robotic probe to one of the most potentially hazardous of the known Near-Earth Objects. The OSIRIS-REx mission to asteroid (101955) Bennu will be a pathfinder for future spacecraft designed to perform reconnaissance on any newly-discovered threatening objects. Aside from monitoring potential threats, the study of asteroids and comets enables a valuable opportunity to learn more about the origins of our solar system, the source of water on Earth, and even the origin of organic molecules that lead to the development of life.

NASA recently announced development of a first-ever mission to identify, capture and relocate an asteroid for human exploration. Using game-changing technologies this mission would mark an unprecedented technological achievement that raises the bar of what humans can do in space. Capturing and redirecting an asteroid will integrate the best of NASA's science, technology and human exploration capabilities and draw on the innovation of America's brightest scientists and engineers.

More information about asteroid radar research is at: http://echo.jpl.nasa.gov/

More information about the Deep Space Network is at: http://deepspace.jpl.nasa.gov/dsn .