IBM scientists from today unveiled the world’s smallest movie, made with one of the tiniest elements in the universe: atoms. Named “A Boy and His Atom,” the Guinness World Records-verified movie used thousands of precisely placed atoms to create nearly 250 frames of stop-motion action.

A Boy and His Atom” depicts a character named Atom who befriends a single atom and goes on a playful journey that includes dancing, playing catch and bouncing on a trampoline. Set to a playful musical track, the movie represents a unique way to convey science outside the research community. 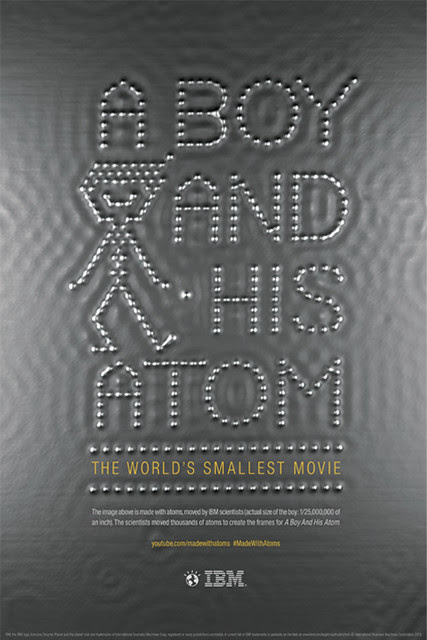 “Capturing, positioning and shaping atoms to create an original motion picture on the atomic-level is a precise science and entirely novel,” said Andreas Heinrich, Principle Investigator, IBM Research. “At IBM, researchers don’t just read about science, we do it. This movie is a fun way to share the atomic-scale world while opening up a dialogue with students and others on the new frontiers of math and science.

In order to make the movie, the atoms were moved with an IBM-invented scanning tunneling microscope. “This Nobel Prize winning tool was the first device that enabled scientists to visualize the world all the way down to single atoms,” said Christopher Lutz, Research Scientist, IBM Research. “It weighs two tons, operates at a temperature of negative 268 degrees Celsius and magnifies the atomic surface over 100 million times. The ability to control the temperature, pressure and vibrations at exact levels makes our IBM Research lab one of the few places in the world where atoms can be moved with such precision.”

Remotely operated on a standard computer, IBM researchers used the microscope to control a super-sharp needle along a copper surface to “feel” atoms. Only 1 nanometer away from the surface, which is a billionth of a meter in distance, the needle can physically attract atoms and molecules on the surface and thus pull them to a precisely specified location on the surface. The moving atom makes a unique sound that is critical feedback in determining how many positions it’s actually moved.

As the movie was being created, the scientists rendered still images of the individually arranged atoms, resulting in 242 single frames.

The Need to Shrink Big Data

Developing the world’s smallest movie is not entirely new ground for IBM. For decades, scientists at IBM Research have studied materials at the nanoscale to explore the limits of data storage, among other things.

As computer circuits shrink toward atomic dimensions -- which they have for decades in accordance with Moore's Law -- chip designers are running into physical limitations using traditional techniques. The exploration of unconventional methods of magnetism and the properties of atoms on well-controlled surfaces allows IBM scientists to identify entirely new computing paths.

Using the smallest object available for engineering data storage devices - single atoms - the same team of IBM researchers who made this movie also recently created the world's smallest magnetic bit. They were the first to answer the question of how many atoms it takes to reliably store one bit of magnetic information: 12. By comparison, it takes roughly 1 million atoms to store a bit of data on a modern computer or electronic device. If commercialized, this atomic memory could one day store all of the movies ever made in a device the size of a fingernail. 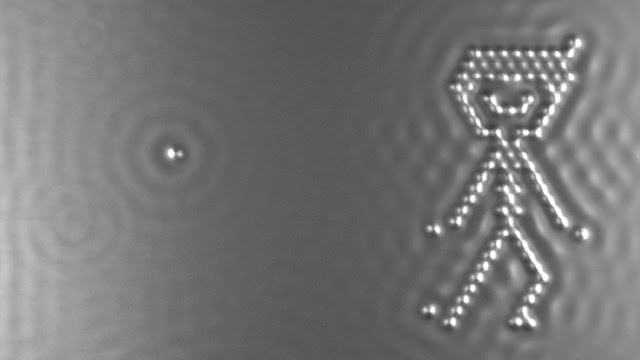 “Research means asking questions beyond those required to find good short-term engineering solutions to problems. As data creation and consumption continue to get bigger, data storage needs to get smaller, all the way down to the atomic level,” continued Heinrich. “We’re applying the same techniques used to come up with new computing architectures and alternative ways to store data to making this movie.”

In the company's 101 year history, IBM has invested in scientific research to shape the future of computing. Today's announcement is a demonstration of the results garnered by IBM's world-leading scientists and the company's continual investment in and focus on exploratory research.