The accelerating disappearance of Earth's species of both wild and domesticated plants and animals constitutes a fundamental threat to the well-being and even the survival of humankind, warns the founding Chair of a new global organization created to narrow the gulf between leading international biodiversity scientists and national policy-makers. 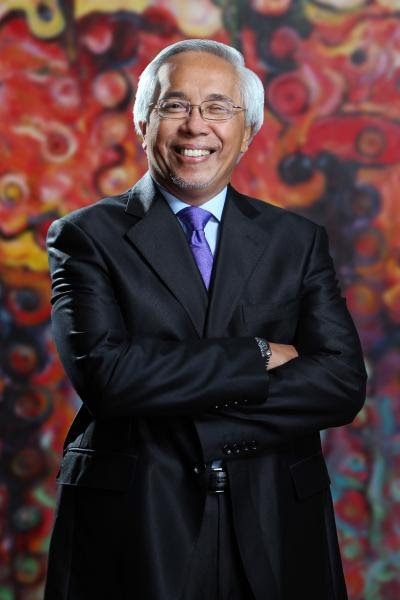 In Norway to address an elite gathering of 450 international officials with government responsibilities in the fields of biodiversity and economic planning, Zakri Abdul Hamid offered his first public remarks since being elected in January to head the new Intergovernmental Science-Policy Platform on Biodiversity and Ecosystem Services (IPBES) -- an independent body modeled on the Intergovernmental Panel on Climate Change.

Dr. Zakri, a national of Malaysia who co-chaired 2005's landmark Millennium Ecosystem Assessment and serves also as science advisor to his country's prime minister, cited fast-growing evidence that "we are hurtling towards irreversible environmental tipping points that, once passed, would reduce the ability of ecosystems to provide essential goods and services to humankind."

The incremental loss of Amazon rainforest, for example, "may seem small with shortsighted perspective" but will eventually "accumulate to cause a larger, more important change," he said. Experts warn that ongoing climate change, combined with land use change and fires, "could cause much of the Amazon forest to transform abruptly to more open, dry-adapted ecosystems, threatening the region's enormous biodiversity and priceless services," he added.

"It has been clear for some time that a credible, permanent IPCC-like science policy platform for biodiversity and ecosystem services is an important but missing element in the international response to the biodiversity crisis," Dr. Zakri told the 7th Trondheim Conference on Biodiversity.

The Millennium Ecosystem Assessment "demonstrated that such an intergovernmental platform can create a clear, valuable policy-relevant consensus from a wide range of information sources about the state, trends and outlooks of human-environment interactions, with focus on the impacts of ecosystem change on human well-being. It showed that such a platform can support decision-makers in the translation of knowledge into policy.

"The Millennium Ecosystem Assessment provides our baseline," he said. "The IPBES will tell us how much we have achieved, where we are on track, where we are not, why, and options for moving forward. It will help to build public support and identify priorities."

The structure of IPBES mimics that of the IPCC but its aims go further to include capacity building to help bridge different knowledge systems.

"IPBES will reduce the gulf between the wealth of scientific knowledge on declining natural world conditions, and knowledge about effective action to reverse these damaging trends," he said.

Even barnyard diversity is in decline

Some scientists have termed this the "sixth great extinction episode" in Earth's history, according to Dr. Zakri, noting that the loss of biodiversity is happening faster and everywhere, even among farm animals.

He underlined findings by the UN Food and Agriculture Organization that genetic diversity among livestock is declining.

"The good news is the rate of decline is dropping but the latest data classify 22% of domesticated breeds at risk of extinction," Dr. Zakri said.

Breeds become rare because their characteristics either don't suit contemporary demand or because differences in their qualities have not been recognised. When a breed population falls to about 1,000 animals, it is considered rare and endangered.

Causes of genetic erosion in domestic animals are the lack of appreciation of the value of indigenous breeds and their importance in niche adaptation, incentives to introduce exotic and more uniform breeds from industrialised countries, and product-focused selection.

Among crops, meanwhile, about 75 per cent of genetic diversity was lost in the last century as farmers worldwide switched to genetically uniform, high-yielding varieties and abandoned multiple local varieties. There are 30,000 edible plant species but only 30 crops account for 95% of human food energy, the bulk of which (60%) comes down to rice, wheat, maize, millet and sorghum.

"The decline in the diversity of crops and animals is occurring in tandem with the need to sharply increase world food production and as a changing environment makes it more important than ever to have a large genetic pool to enable organisms to withstand and adapt to new conditions," he said.

Biodiversity and the Sustainable Development Goals

According to Dr. Zakri, the most important outcome of last year's Rio+20 international environmental summit of nations was agreement to set new multi-year global objectives to succeed the Millennium Development Goals (2000 - 2015).

Biodiversity is expected to feature prominently in the new "Sustainable Development Goals."

For specifics, Dr. Zakri commended the Aichi Biodiversity Targets, already established through the Convention on Biological Diversity, which contain five strategic priorities and 20 specific targets internationally agreed for achievement by 2020, beginning with public awareness of the value of biodiversity and the steps people can take to conserve and use it sustainably.

"The Aichi Targets are an important contribution to the SDG process and it is up to us to ensure that they are fully considered," he said.

"I would argue, though, that advancing towards equity and sustainable development requires us to go beyond. We need to meet the fundamental challenge of decoupling economic growth from natural resource consumption, which is forecast to triple by 2050 unless humanity can find effective ways to 'do more and better with less.' There are no simple blueprints for addressing a challenge as vast and complex as this but it's imperative we commit to that idea.

"We also need measures of societal progress that go beyond Gross Domestic Product. We need the kind of vision embodied in the Inclusive Wealth Index being pioneered by Sir Partha Dasgupta of Cambridge University, Anantha Duraiappah at IHDP, and Pushpam Kumar at UNEP. As they have convincingly argued, enlightened measures of wealth that include natural capital, not just output like GDP, offers a real portrait of sustainable development," he added.

"The idea that natural capital should be measured like this makes many nervous. And I agree that many of the services the environment provides, like clean water and air, are irreplaceable necessities.

"In theory, however, the undoubted value of these natural treasures should be reflected in their price, which should rise steeply as they become scarcer. In practice, natural assets are often hard to price well, if at all. Although this work is still in its infancy, it is worth recalling that GDP has only been measured for the last 70 years. And that originally it was a far cruder metric than today. The reality over many decades and the recent experience with the MDGs demonstrate all too clearly the limited success that even legal biodiversity-related commitments have in the absence of some sort of metric that speaks to other sectors and interests involved in the development process. We need to urge more economists to do the hard but valuable work of pricing the seemingly priceless. Ensuring these ideas are properly reflected in the SDGs could provide the type of support and encouragement needed."

Biodiversity from terrestrial, marine, coastal, and inland water ecosystems provides the basis for ecosystems and the services they provide that underpin human well-being. However, biodiversity and ecosystem services are declining at an unprecedented rate, and in order to address this challenge, adequate local, national and international policies need to be adopted and implemented. To achieve this, decision makers need scientifically credible and independent information that takes into account the complex relationships between biodiversity, ecosystem services, and people. They also need effective methods to interpret this scientific information in order to make informed decisions. The scientific community also needs to understand the needs of decision makers better in order to provide them with the relevant information. In essence, the dialogue between the scientific community, governments, and other stakeholders on biodiversity and ecosystem services needs to be strengthened.

IPBES provides a mechanism recognized by both the scientific and policy communities to synthesize, review, assess and critically evaluate relevant information and knowledge generated worldwide by governments, academia, scientific organizations, non-governmental organizations and indigenous communities. This involves a credible group of experts in conducting assessments of such information and knowledge in a transparent way. IPBES is unique in that it will aim to strengthen capacity for the effective use of science in decision-making at all levels. IPBES will also aim to address the needs of Multilateral Environmental Agreements that are related to biodiversity and ecosystem services, and build on existing processes ensuring synergy and complementarities in each other's work.

Specific discussions on IPBES started following the final meeting of the multi-stakeholder international steering committee for the consultative process on an International Mechanism of Scientific Expertise on Biodiversity (IMoSEB) in November 2007. The consultation towards IMoSEB decided to invite the Executive Director of UNEP - in collaboration with governments and other partners - to convene an intergovernmental and multi-stakeholder meeting to consider the establishment of an intergovernmental mechanism for biodiversity and ecosystem services. There was also consensus among the stakeholders involved in the Millennium Ecosystem Assessment (MA) follow-up initiative that the follow up to the IMoSEB process and the MA follow-up process should merge. It was the coming together of the MA follow up process with the follow up to the IMoSEB consultations that led to the present process on IPBES.

Three intergovernmental and multistakeholders meetings (Malaysia 2008, Kenya 2009, Republic of Korea 2010) were held to discuss ways to strengthen the science-policy interface on biodiversity and ecosystem services. At the first two meetings, the gaps and needs for strengthening the science policy interface were identified, and at the meeting in June 2010, in Busan, Republic of Korea, governments decided that an IPBES should be established, what the focus of its work programme should be, and agreed on many of the principles of its operation as part of the Busan Outcome.

The Busan Outcome was welcomed by the 10th Conference of the Parties to the Convention on Biological Diversity (CBD) in Nagoya in October 2010, and was subsequently considered at the 65th session of the United Nations General Assembly (UNGA). UNGA passed a resolution requesting UNEP to convene a plenary meeting to fully operationalize IPBES at the earliest opportunity. This resolution was then taken on board by UNEP in a decision at the 26th session of the UNEP Governing Council meeting, held in February 2011.

The plenary meeting was held in two sessions. The first session was held from 3 to 7 October 2011 in Nairobi. The second session of the plenary was hosted by UNEP, in collaboration with UNESCO, FAO and UNDP, in Panama City from 16 to 21 April 2012. There, many of the modalities and institutional arrangements for the Platform were finalised and 94 Governments adopted a resolution establishing the Platform as an independent intergovernmental body.

The first meeting of the Platform's Plenary (IPBES-1) was held in Bonn, Germany from 21 to 26 January 2013, hosted by the Government of Germany. The final outcome document of this session is available as IPBES/1/12, which includes decisions on the next steps for the development of an initial work programme, the status of contributions and initial budget for the Platform for 2012, the IPBES administrative and institutional arrangements, and the procedure for receiving and prioritizing requests put to the Platform. In addition the report includes the updated rules of procedure for the plenary of the Platform.