Crystal-Clear Method For Distinguishing Between Glass And Fluids

Many solids are produced from melting. Depending on how quickly they cool off, invariably, internal tensile stresses begin to build up. One example are Prince Rupert's Drops, or Dutch tears: you can hit their thick end with a hammer without breaking them while a slight pressure applied to their thin end is enough to shatter the entire tear.

The colloids that were used for the model: particles, each with a diameter of approximately 150 nanometers, suspended in water. The solid nucleus consists of the plastic polystyrene, the surrounding shell of a thermosensitive poly(N-isopropyl-acrylamide) network. By lowering the temperature, each individual particle's volume - and, by definition, its packing density - can be increased. 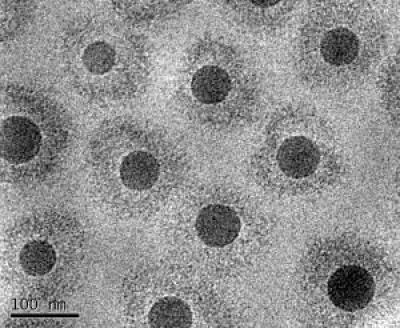 The properties of safety or even gorilla glass are determined to a large extent by their internal tensile stresses. However, until now, our understanding of the unique characteristics exhibited by the condition of the glass as compared with a tough molten mass was spotty at best. Now, a collaboration of several German and Cretian research teams has offered a surprisingly simple model to explain the difference between glass and molten materials.

The HZB's contribution was by chemist Dr. Miriam Siebenbürger of the Institute for Soft Matter and Functional Materials. Siebenbürger came up with a rather elegant model system consisting of spherical plastic particles in aqueous solution (a mixture known as a suspension). Due to the tiny size of the particles – each having a diameter of around 150 nanometer – they float in the aqueous solution but never sediment.

The nanoparticles are covered by a thermosensitive "shell", whose thickness can be adjusted by varying the temperature, causing them to shrink and grow reversibly in a continuous manner. This allows the chemist to convert her samples from a densely packaged "glass" into a less dense, more fluid state, in other words melt them down. Through a series of rheological measurements, Miriam Siebenbürger was able to determine how quickly the internal tensions in her samples could relax at different particle packing densities.

Chemist Dr. Miriam Siebenbürger has contributed to develop a new method to distinguish between a glassy and liquid state. 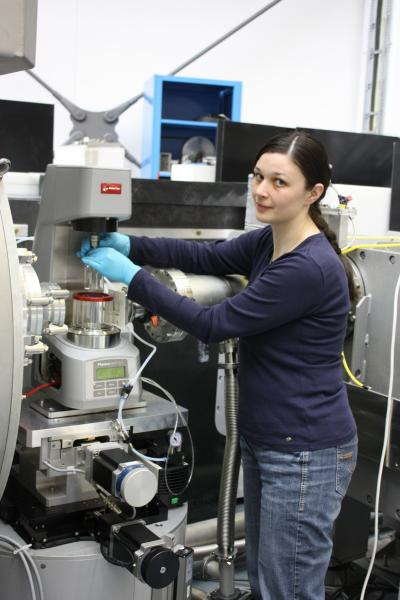 For this purpose, she placed the samples in-between two parallel plates, which she counter-rotated relative to each other to produce shearing forces within the sample. After reaching a stationary state of shearing stress at a constant shearing rate, the rotating plates were actively stopped. Next, the force it takes to stop the plates to zero shear rate, and which is a gauge for internal tensions, was measured. In the process, the critical difference between the fluid and glassy state became apparent:

Whereas the fluid tensions dissipated without a trace, a proportion of the tensions was maintained in the glassy state. The results are fitting nicely into the theoretical model developed by a group of Constance physicists who calculated the behavior of hard spheres at different packing densities.

What's more, measurements of the internal tensile stresses and dynamics of larger-sized particles (in the m range) by Cretian and Düsseldorf researchers and the molecular dynamics simulation of hard spheres by a team of researchers from Cologne and Mainz exhibit similar patterns of behavior. The scientists are convinced that their findings apply to all types of glass that are created as a result of their high packing densities including metallic glass, which is mainly used for high-tech applications. The researchers' findings have now been published in the renowned scientific journal, Physical Review Letters.